We think (since we are getting old) that we had the 1978 Plymouth Horizon Black with Orange/Red/Black custom stripes ( I know you had to see it to like it)  and an old 1972 Ford pickup (Black) for vehicles.

I had been drooling over the Dodge Chargers.  Zero to 50 in 6.9 seconds…and good gas mileage…a thoroughbred driving machine.   I only had to drive across town to work….all city traffic.
That car was calling my name…We found the “one” Candy Apple Red…perfect…and the Dealership in Moorhead was running a sale.  BUT we need to think about it a day or two…we returned to the dealership with a check in hand and they said the sale price no longer applied.  CRAP…I was so disappointed.  We visited a dealership in Fargo…they had nothing we wanted…wrong color… I said to the salesman “The car I want is sitting over in Moorhead.”  He said “If you want that car I will give you a deal on it.”  SOLD!! 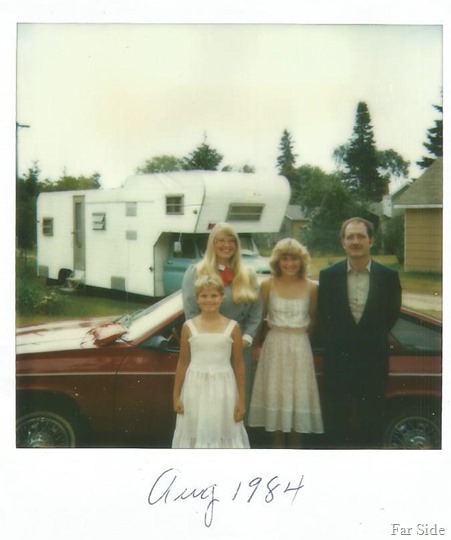 Jennifer in front, Me, Trica, Far Guy
Trica was 12 years old and Jennifer was almost 9.

It was a fine vehicle we even had room for the dog!  We made a number of long trips (Texas and  Florida)…as the girls grew taller the back seat became a real pain in the neck for them and for us because that invisible line in the back seat was just not working anymore.  One day Far Guy said “Honey I think you are more of a Dodge VAN person now…so we traded my beautiful red Dodge Charger off for a blue 1986 Dodge Caravan …the girls had lots of room.  I sold it ( to my other baby brother) after I got stranded at Uncle Otto and Aunt Maries after a snowstorm, the last mile of the road home was not plowed…I needed four wheel drive.

Far Guy’s Dad knew all the car salesmen…when I needed the Four Wheel Drive…he took me to every dealership in the area “shopping.”  I am pretty sure he had a really good time looking at vehicles.  In Perham at the Ford Dealership we found my next dream vehicle (used).  I drove a 1984 Ford Bronco II until 2004 and I bawled when it left the driveway…it had been paid for a number of years.

That is Far Guy’s parents custom built Motor Home in the background.

Now I have a Sunday Car we only take it out on Sundays or for longer trips.  It gets great gas mileage a week ago we got 39.2 mpg.  Chance has the whole back seat to himself.  I woulda bought another Dodge Charger but they are considerably more than the $5,900 we paid for the one in 1981.  In fact the one I looked at was more than we spent on that house back in 1979. 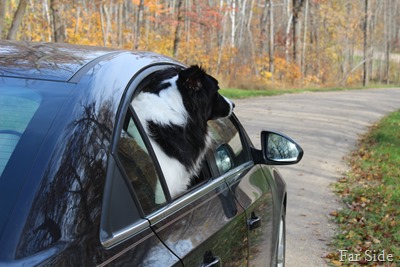 Chance in the Sunday Car…it is black..shows every water spot and speck of dust.  Not sure if the leather heated seats trump Candy Apple Red or not..but it has the zero to 60 down just fine.

Isn't it funny how we remember so fondly an old car we had. And how cheap it was back then by today's standards. Hubby and I are contemplating buying a new car a both ours are over 10 years old and have over 100,000 miles on them. The "Old Folks" cars out here we just can't afford and I can't get into the ones we can afford - too low to the ground. Love the candy apple red car.

I bought a used Volkswagen once that was red, but it wasn't candy apple, more like oxidized faded red. I did love that car, though. I enjoyed your reminiscence about cars you have known and loved. :-)

We have a candy apple red Toyota Echo. Gets about 50 miles to the gallon. We can get three dogs in the back seat, although Calli would rather have it all to herself. I'm wondering what your Monday to Saturday set of wheels is:)

PS It has 308,000 km, and we will drive it until it drops. I'ts cost us almost nothing in repairs. Larry has fond memories of his older cars. For me they were just a place to get from A to B.

Except for a red volkwagen and a blue/green Toyota we've nearly always had black or white cars. Right now my husband has a black Mazda Miata and I have a Mazda MX3, it's white and is a 6 speed, don't know how to drive an automatic. My could run his into the ground and gets great gas mileage.

I've had several vehicles but never my "dream car" - a Mercury Cougar. I always thought it would be fun to have a VW bug, but after riding in one on an extended trip, I changed my mind pretty quickly.

It's important to color coordinate your car and dog!

And Granny does zero too sixty everyday...miles yet! You've had about the same number of cars I've had. You don't need a new car all the time.

I don't guess I have ever had a dream car- but I do like Dodge and I have had exactly three in the last twenty some odd years- a caravan, a Durango and now a Journey. The Journey is the first black car I have ever owned and I always thought I would hate that color, but I really like it.

I love the picture! I would love to have a new Dodge Charger now but there is no way! I'm probably stuck with mama's little Toyota Corolla for the rest of my life! I do like a sporty ride!

I really like the old photo! You and your daughters are beautiful! The camper in the back can't distract from it!

Funny as this morning on the radio I was listening to them talk about the current trend in car colors - apparently you are right with the times (and were before too) - where red was #1 back in the day, now it is black, white and silver!

I do not like to buy cars as things never seem to be above board. From past experiences I paid too much for a car and I found the dealership not ethical when they take advantage. My last car was a salesmen car just like all the 12 others in a row with one years worth of mileage on them. I could pick any color as they were all the same car with the same mileage on them. My 1980 Monte Carlo, used, was my pride and joy. I have yet to buy a car I could afford that would be a dream car.

We can mark our time with vehicles too. I enjoyed the post.

Fun to see your young girls and snazzy car. The favorite cars of my youth were my Volkswagons, beetles and "bus". I was more "hippy" than "sporty," I guess!

You had long hair! I'm with you on the candy apple red. At first I thought you all were dressed for Easter in your photo, but not in August. Everyone looks dressed up.

I'm a Mopar fan too, loved those Dodge muscle cars. I also had a black 1972 Ford truck, back in the day.

So...what kind of car is your mystery Sunday Car with the 39.2 mpg and heated leather seat bonus?

Your new car looks like the one my son bought the first of the year. At least what I can see of it. He loved the heated leather seats when it was cold. It was fun to see your photos of the cars and your family! My first car was ugly. My dad found it on sale...450 bucks! I didn't have it long. In later years, after I discovered Toyota Camrys, they are the only car I want. Love them! And they've all been white. As was my first new car, an Olds Cutlass Supreme. I loved that car, too, and had it a long time.

Why didn't you start with the DeSoto?

I didn't learn to drive until I was 30. My first car was a used burgundy Pacer. My dad called it an aquarium on wheels, but I could see out of it well all around. I loved her dearly, we'd been through so much together, and cried when she finally limped very slowly off to the car dump a couple miles away because one of her tires started to kind of fall over (axel problems, I believe). I was proud of her that she made it to her final resting place under her own power.

I wanted a Charger too but never got one. i did have a red Cougar convertible with white interior but not for long as it was a lemon! I finally traded in the van for my Tahoe with 4 wheel drive which I needed living out in the country.
I still have my Tahoe and will keep it as I will need it up North.

What a pretty car! Love that color. When mama was still alive, I was driving daddy's car which had heated leather seats. She would have to me drive thru Wendy's and get her a Frosty and then make me drive around with the heated seat on while she ate! lol
Our present car is black also with black interior. Shows all the cat hair!