Chance and I had a day at home yesterday.  Far Guy was off with a friend for the day, it was an Air Force Base trip and took all day.   They left early and Chance howled up a storm because he was left behind…just what I wanted to wake up to.  Eventually I convinced Chance that the world was not coming to an end.  I had a rotten night…nightmares filled with Undertakers…go figure.  I was certain that someone died at 3:45 AM but the whole day went on without death news.

We made new Hummingbird syrup and hung up suet for the birds and then tsk tsked about the sunflower that our friends the %^$# squirrels broke off.  It was getting nice and tall too….the buggers.  The wind was gale force all day long, the yard is littered with leaves and branches. A certain dog was positive that trees would come crashing down on him if he was outside ALL by himself. 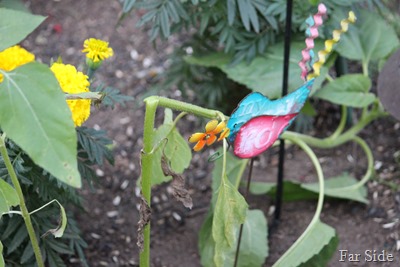 I worked on Christmas ornaments.  I also worked in my garage for awhile….sorting through a bunch of Shiny Brites from a garage sale.  Then I headed for the greenhouse/woodshop and looked over my glass projects.

Brought out a new glass flower that was a pain in the butt. 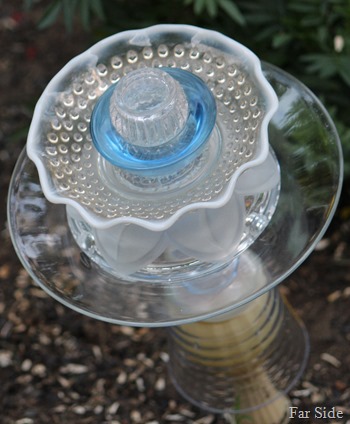 It was supposed to be six piece glass flower but turned out to be seven because the blue goblet on the bottom cracked so I glued a vase inside the goblet…it may last awhile …we will see.  I glue one piece at a time and wait a few days and glue more as the pieces come together over a week or so.  I have lots of room out there and I make good use of it!

I put supper in the slow cooker, then I decided to paint my picture frames and have a nap.  Those frames will need several coats of paint.

Far Guy came home to a sleepy me and an overjoyed dog.  So ends another day in the fast lane.

Chance sure does love his "buddy". That is so sweet. Your busy life sounds like mine. Oh the joy of retirement. Love your glass flower.

Glad to know Chance and FG were reunited. That was a close one, according to Chance. Hahaha! :-)

Quiet except for Chance huh! I love the flower and I've done a few of those glass bird feeders and baths....the last one went to the trash this year as it had cracked and was coming apart. :) I like yours though - much more artsy than mine was.

Beautiful header... There's something familiar about it... (;

I love this piece of glasswork! The combination of busy texture and simple color is perfect! Sometimes we need a little solitude to get really creative. But I bet Chance was glad to have both his people back where they belong. So cute.

Border collies do get attached to their owner(s), probably more than any other breed.

Glad to hear everyone is safe. Your glass flowers are inspirational and so pretty!

Sounds like you made good use of the day. Sorry about the wind causing debris to fall in the yard. Glad you worked on your ornaments and the glass flowers. We've been using the crockpot a lot this summer too. Hope each of you are having a good day.

There should be, that is your Hydrangea and your tree Chance is hiding behind:)

Sounds like a good day to me, although it seems Chance wouldn't agree!

Can't squirrels do a lot of damage? I hate that one broke your sunflower. Your glass flower is so pretty!

I don't know much about glassware, but I recognize the hobnail piece in your flower. It's an Anchor Hocking Opalescent Moonstone Crimped Bowl. And that photo of Chance in your header is CUTE! Too bad about the broken sunflower.

I like your glass flower. I recognize a couple of pieces. Both dogs don't like either one of us to leave. Both will camp out by the door until I finally get back from getting the mail, three blocks away.

Strange I had the same dreams last night very strange indeed. I like the colour and texture of that glass. Beautiful Hope you had a nice nap:) Hug B

That sounds like a very good day - well except for the dog howling, the squirrel damage, and the gale force winds!
It's good to see you continue to create glass flowers.

Fast lane is right. You got a lot done in one day.

Sorry about your sunflowers.....squirrels can be pests!

What a nice puttering sort of day. That glass creation is so unusual. Do you put it out in the garden and if so how does it fare?

Sounds like a good day! Love that glass flower.

Poor Chance! He had a rough day! And poor you, too...we could all do without nightmares like that :(