I finally weeded the little garden out front.  It looks better now, my flowers are growing slowly.  I have four Sunflower seedlings that have survived the squirrels. 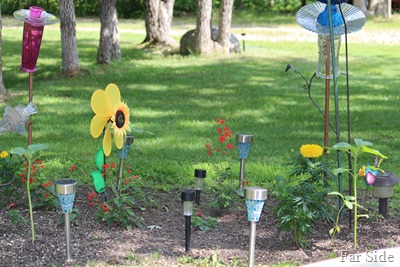 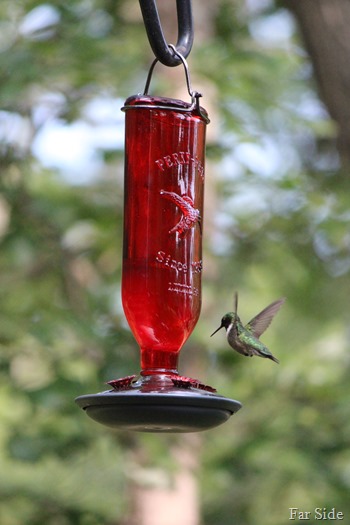 This feeder hangs above the Salvia.  It was a gift from Jo next door…for entertaining Odda and Putz a few times.   I love the red color… and no red food coloring is used in the sugar mixture.  We have at least three hummingbirds…one is a baby, he is about 1/4 the size of the other two…he sat on the feeder to drink…he was really cute…no photo yet but I hope to get one soon.

There are a few skeeters out, but there was another Dragonfly hatch. 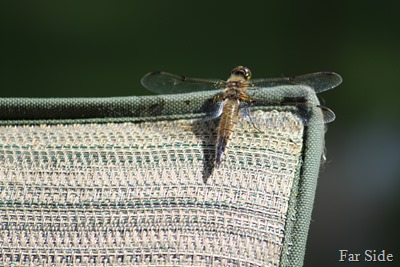 This one sunned itself on the patio chair.

The mowing, trimming and weeding was done, bird feeders filled and bird baths washed out and it was time to just sit and do some carving outside on Tuesday. It was a nice day and the breeze was cool, with no smoke in the air!

Wednesday it was cool and rainy…high of 74.  I worked on a bead project and did some organizing in the woodshop and we took a trip over to Detroit Lakes. Stopped at the antique mall and bought some old photos.  Far Guy bought me a new Lassie Book…so I read it out loud to him and Chance on the way home…once again Lassie saved the day/kittens.

Labels: birds, In the yard

Sounds like you have been busy ! Lovely photos , Thanks for sharing , Have a good day !

Your yard looks so pretty and I love that humming bird feeder...gorgeous! I never color my syrup but they seem to know by the red base plus they've been coming to mine for years.
Gotta love that Lassie!

I'd be willing to bet the skeeters in your area are nearly as big as the dragonfly who you caught sunning himself. ;o)

Your yard looks so pretty. Love all the Do-Dads in the flower bed. My hummingbird feeder just has the red base and I don't ever put coloring in the syrup ( I make my own ). Haven't seen too many skeeters around here this year. Mowing the yard today.

Now if you catch a photo of the baby hummer, that will be an amazing thing to see. Look how delicate the dragonfly wings are! I see them on my walk, but they are always miving. The smoke in the air was really something, wasn't it? You and FG remind me of my husband and me . . . except he was the one reading. He read the newspaper to me.

I love that hummer picture! And we only got to 78 here yesterday, thanks to the smoke. I don't know if we'll have much view when we get to the mountains today, but I'm grateful for the cooler weather. It sounds like it was a perfect day for you yesterday. I didn't know dragonflies eat skeeters, but it makes sense. :-)

Hummers are always so nice to have around. Nice feeder.

I have never seen a baby hummingbird.... ever. How cool!

Nice action shot of the hummingbird!

Nice hummer picture! I like that red feeder- I gave up on feeding hummers here because the wasps get all the food. Nice to hear you got a little rain to clear the air.

Sounds like you guys are having some very good summer days.
We are too!

That is a neat hummer feeder. I need to get mine out there and soon.

Life is good. Now you can come and weed my flower beds.

Your photos are outstanding!

That's a lovely hummer feeder. Glad you have enjoyed some cool time in the yard without smoke. Happy to hear you purchased some old photos and the Lassie book sounds perfect!

Good idea to make the hummer feeders out of coloured plastic or glass. I had a couple landing near me, on the top of the pea fencing, when I was weeding last evening. Of course after I went to get the camera, they didn't cooperate. Still hot, smoky and dry here, although a break should be coming tomorrow. We have been 30-34C (86-93F) for what seems like forever.

I had a couple Lassie books when I was a kid and never missed the latest TV episode. Saturday nights, as I remember.
Such a pretty new feeder. No wonder you have hummingbirds visiting. That's s nice shot.

Lassie the tv show was a favorite when I was growing up. It's a shame that kids today don't get to see the oldies, or won't..probably too boring to them. I like the red feeders also, but the last two I bought I dropped and broke. :)

No smoke here either... such a relief. I have that exact same red feeder, but the hummers are not around much right now. Wonder if they're nesting. I miss them.

very nice, and love the dragonfly and hummer photos!

Loved Lassie!! Waited for the show to come on. :)
The yard looks good, the smoke seems to be gone, the hummers look happy, and the dragonfly is snoozing in the sun...ahhh! What more could one ask for?

What a relief it must have been to have no smoke in the air! When there are forest fires up in the foothills beyond here, it's amazing how far that smoke can travel. I remember one summer when it seemed like weeks before the air cleared up. No good to breathe stuff like that!