What good is a first name if no one ever calls you by that name?  Far Guys Maternal Grandmother’s real name was Almeada Clara.   She was mostly known as Meade..or Meady, but I have heard a few people refer to her as Clara.

I found an old polaroid of Meade and an unknown bride.  Near as we can figure one of the Nurses was getting married and stopped by to see some of the residents.  Far Guy’s Dad took this Polaroid Photo.  It is not marked, I sent a copy to a few relatives and no one knows who the bride is. 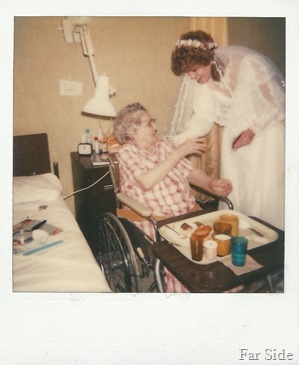 The only thing I can figure out for sure is that it was taken in the Nursing Home in Detroit Lakes Minnesota and it was taken before 1990…because Meade died that year.

However this photo reminded me of two things.  Notice all the glasses and cups on Grandma Meades tray.  She liked to line up her coffee, milk and juice just so…and her water was nearby.  By the time this photo was taken her eyesight was not very good…and if the drinks were lined up she could find them.  At this point in her life she had been deaf  for 40 plus years (Tuberculosis).   Her Magic Writing Pad/Magic Slate and a magnifying glass are on the bed.  She never learned sign language so everything had to be written on the Magic Slate, she would read it and them answer verbally.  She talked quite loud and had a very distinctive voice.

Back in the 1970’s and 1980’s we would stop to visit her every few weeks…she loved seeing the girls.  They were mostly scared of her, the loud voice and when she would reach out to touch or hug them they would become frightened.

Far Guy’s Mom came to visit her Mother regularly… she visited at least once a week if not twice.  Far Guy’s Dad patiently drove her the 45 miles over and back again from the visits.  One time Meade asked her “Who is that man you are with?  He sure has been hanging around a long time.”

That story when related to us made us all smile.

That was so sweet of that bride to visit Far Guy's Grandmother. You just don't see that any more. Nursing homes are a place I don't like to visit as I always feel so bad for all the patients there. Both my mom and dad were in "The Home" and I hated it that they had to be there.. Praying I don't end up in one myself. I love "grandma's" comment about Far Guy's Dad.

She sounds like she was an interesting person who knew how to deal with her limitations. How many people would visit their parents that often in a nursing home these days? BTW, thank you for the note you sent me explaining things. I wish they could do something for such a great guy. :-(

Wonderful. Every bit of this.

How sweet. She is a beautiful bride, whoever she is.

I had a great aunt, who I never knew, named Almeda. Lovely photo. I think both of you come from long lived and interesting people. Love reading your stories.

When my uncle lost his hearing, we communicated with a slate, too. I'd write something and he'd answer verbally. It worked really well.

I got a chuckle out of the comment about FarGuy's dad. ;o)

It seems to me that years ago, more names were shortened or replaced with a nickname than they are today. My M-I-L's name was Elizabeth, but I only ever heard her called Beth or Bessie.
The last story about Far Guy's dad made me chuckle:) I can relate to some of your stories about Almeada, dealing with my mother in the same situation.

So many miss the opportunity to share in the lives of the very elderly in nursing homes.

My late wife's mother was Bertha and during the war they talked about Big Bertha. She was grateful to have Judy, Judith, to follow her first name. I don't understand how a mother from Norway would call their daughter Bertha unless it was a translated name from a real name from Norway. I liked how Meade would comment on the husband who brought her to see her all those times.

I think many people are called y something else other than their name. It's interesting how they got the other name . this lady deserves a lot of credit for living a good quality life with a handicap.

Lovely photo and story . I to go by a shortened name Elaine is my real name but Lainey is what most of my family calls me and I use my middle name Lillian for my photography watermark on my other blog and face book page . Thanks for sharing , Have a good day !

It's amazing what some people must do to adapt to difficult health situations. Almeada sounds like a real survivor, considering all she went through.

I used to work with someone who had that same name--although spelled a little differently. We never called her anything but her full name. I guess everyone is different. I could see Meade being a handy nickname--short, and to the point.

That bride is a gem to have visited the nursing home. That's just wonderful. It's amazing she lived so long after TB, butnI know times are different than when my great-grandfather died from it. I love Meade's comment about FG's dad hanging around. Great story!

Almeada is a lovely name. What a lot she had to deal with. It's a very sweet photo of the bride visiting her.

A beautiful bride indeed. I should get one of those "Magic Writing Pads" myself.

I bet Almeada enjoyed this visit!