We have a woodcarving friend who participates in area Rendezvous.   A Rendezvous is a meeting at a particular time and place of people who enjoy the same activities. 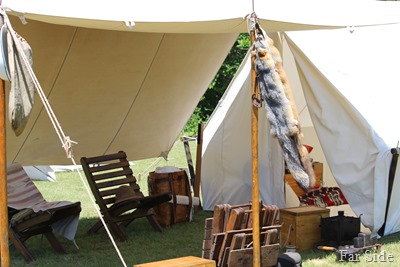 Black Powder, Muzzleloaders…whatever you call them.   They have really long rifles.  Flintlock and caplock. I learned how to tell the difference in the firing mechanism. 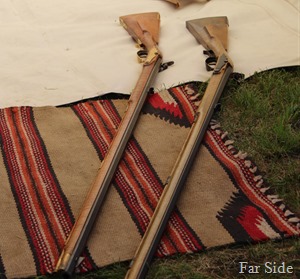 They are quite heavy too…Jim says he has never weighed them but they must weigh about eight pounds each.  He made both of these rifles.

As I took aim, this is not a sport for wimps.  You need a fair bit of arm muscle to hold that rifle steady and it is a long way down that barrel. 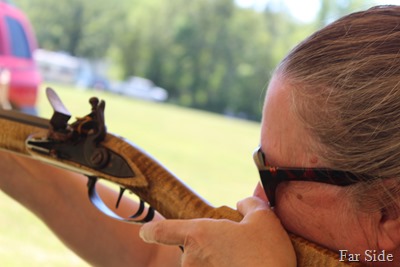 Far Guy offered to hold my camera…he surprised me by taking a photo.  It is even in focus. 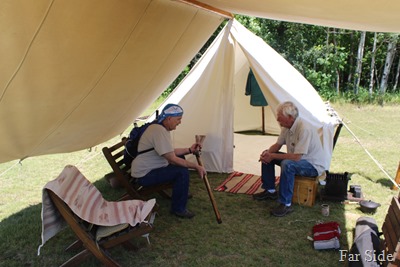 Jim was ready to pack up and was out of his period dress when we got there.  There is another Rendezvous coming up in August…perhaps we will make it to that one before they are ready to pack up!

Jim camps out for the weekend, no his wife doesn’t come along, he says it just isn’t her thing to do.  Jim is a retired Park Ranger, he joined our woodcarving group and he also has a Train Collection.  He is full of stories. 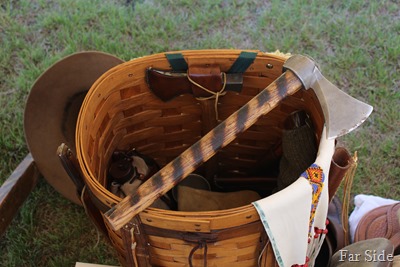 Here is a basket of throwing knives and hawks…it is a very interesting hobby that Jim has…and if you have a question about a weapon he probably knows the answer.

Sounds like an interesting event to attend. Don't think I could shoot one of those guns. Hard enough for me to shoot a regular rifle/shotgun as my left shoulder doesn't work too well. You look good holding that rifle.

Thanks for sharing the photos; he sounds like an interesting guy. Hope you can attend the August event too. You have a nice week.

I hope "full of stories" isn't a euphonym for full of "Oh BAD word!"

Did you actually shoot the flinylock?

Wow, Connie, an actual picture of YOU! Thanks to Far Guy, I know that you do not resemble a lady slipper after all. :-)

We frequently have these types of gatherings in Texas, especially at the old forts that are prevalent here.

Does Jim know about the Wind River Rendezvous in Riverton, WY? It was held just a couple of weeks ago - lots of completions, Indian dancing and trading. I've gone a coup,e of times for short.visits, but some people stay the whole weekend at the site. There are LOTS of Mountain Men (MM) in this area. What is Jim's MM name?

You just jogged my old memory again. I had forgotten that we came across a rendezvous at the park next to Grand Portage. That was a long time ago. We wanted to sit and paint in the park but it was too populated. We really enjoyed seeing the event and took so many photos. The guy shooting his gun for demo was almost hurt with a backfire. I doubt he could hear the rest of the day. I don't even remember where those pictures are. Not on a computer but are in real photo form. Jim sounds like a good friend and it makes it interesting to visit his experience.

I did not know you were a "lefty" too!

Interesting. They used to have trapper/mountain man rendezvous in Owatonna. My only experience shooting a powerful kicking weapon, other than with my 12 gauge goose killer was with my redneck brothers Clint Eastwood Magnum 44 handgun. We used to blow up rotten stumps in Montana on flyfishing trips. He also considered it grizzly bear protection. On the other hand I preferred my off key singing style when I saw big paw prints along the stream bank. It seemed to have worked....:)

I have always wanted to attend a mountain man rendezvous....they have them close to us, but Terry isin't interested.

My kids loved to go to rendezvous and it always seemed the people re-enacting those times were having a wonderful, relaxed time. I would have tried to sneak in an air mattress if I were doing it, I'm afraid! I'm wondering if you shot that musket.

Yes, did you shoot it?

What a fun guy to know and FG gets kudos for the photo!!! :)

I have heard of Rendezvous, been never attended one. It sounds like an interesting Minnesota thing to do. I hope you make the August one. You shoot left-handed!

How fun! I'll bet it was interesting.

His name is Silver Fox:)

No I did not! Maybe next time:(

Home grown experts can be very interesting. They sometimes have a wide knowledge of their area.

Interesting ~ I believe we must have saw a Rendezvous up by Grand Portage - if I knew that was what it was called I had forgotten thank you for reminding me!