Alaska Guy is Far Guys cousin.  He spends a third of his life in Alaska, a third in Arizona and a third in Hawaii.  He is not married at the moment.  Although he has a “gal” and we have met her( she is a doll.)  He flew in and out to see his Dad ( Far Guys Uncle).  Alaska Guy is a pilot…so he comes and goes at will.  He is footloose and fancy free..no kids..no dogs or cats.. 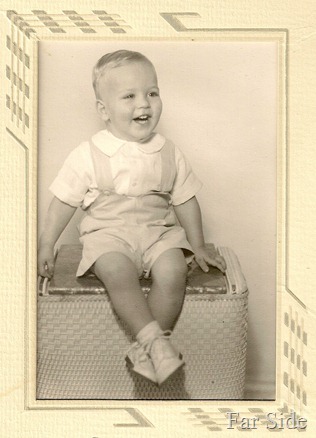 I knew Alaska Guy before I knew Far Guy.  You see Alaska Guy lived kitty corner from our farm.  He lived in a little house behind his grandparents house. He was a year older than me and his sister was a year younger.  We played together all the time.

In 1954 or 1955 it was their house that I was running off to for an afternoon adventure. Knowing I was not supposed to walk anywhere near the highway,I took off into the pasture where I promptly got my britches stuck in the barbed wire and could not get loose. There I hung by the britches, until my Mother noticed my red scarf bobbing up and down. My feet would not touch the ground, I couldn’t get unstuck no matter what I tried. Barbed wire and having short legs ruined my afternoon adventure.

Alaska Guy had his hip done two years ago..he would call and talk for hours.  He must have had good drugs because he doesn’t remember calling us.

When he was here on Sunday he and Far Guy talked about hips, old classmates, when they were little, cars and planes.  It is good to spend an afternoon just talking to one of your cousins.