The Sandhill Cranes are in the grain fields..so are the Canada Geese.  Everyone must be bulking up for the trek south. 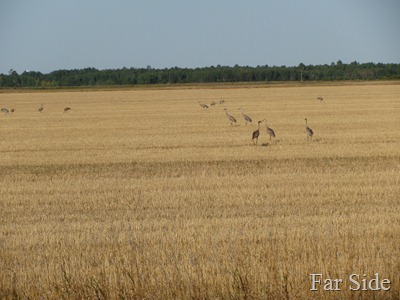 We stopped to watch these one evening.  They have fluff on their behinds that reminds me of a fancy ladies bustle.

They are reasonably elegant with their long legs and long necks..and then they shriek..nothing ladylike about that karr.o..o.o..a..a..a. ( Their call may be reminiscent of something prehistoric.)

A whole “construction", "dance", "sedge", "siege", or "swoop" of cranes calling is enough to make you say “What in the world is that noise?”  Chance looked at them as if to say “What kind of weird bird is that?”

A new day has begun on the crane marsh. A sense of time lies thick and heavy in such a place. ... The cranes stand, as it were, upon the sodden pages of their own history.
Aldo Leopold,“Marshland Elegy,” A Sand County Almanac

These birds were almost extinct in the early 1900’s.   They were very slow to recover. They are large birds with a wing span of up to seven feet and they can weigh 5 to  8 pounds. 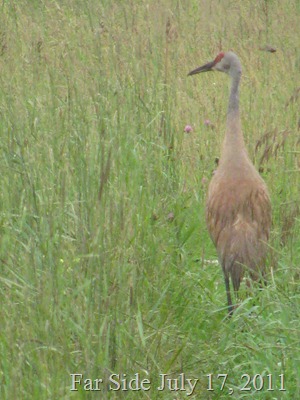 I had not seen a Sandhill Crane until a few years ago.  Now it is common to see them in the fields in the spring and in the fall.  I heard today that several swoops spent the summer about 10 miles south of us.

They are making progress:)