It was a rainy day yesterday..we went south of Detroit Lakes to give Jen a hug for her birthday and enjoy breakfast with her. She was at her annual Fall Scrapbook Retreat.  Last year I attended with both of my daughters, this year I had to work.

We had lunch at the park in Osage with members of the Fire Department.  The food was great, it rained the entire time we were there. After all that food I needed a nap!  So nap I did. What else do you do on a rainy Sunday afternoon anyway?

Far Guy visited with his cousin Alaska Guy..I heard them talking but I can sleep through just about anything. We have not seen Alaska Guy for quite some time.  His Father’s health is failing, he is sleeping most all of the time, when he is awake he is  forgetful..one day he asked his wife who she was..she replied “ I am your wife.”  He said “Really?”  She replied “We had seven children together..I should know if I am your wife or not.”  The other day he escaped from the apartment building..someone found him wandering outdoors and brought him back home.  He is 94 years old.

We skipped supper..and went for a drive because the rain stopped. 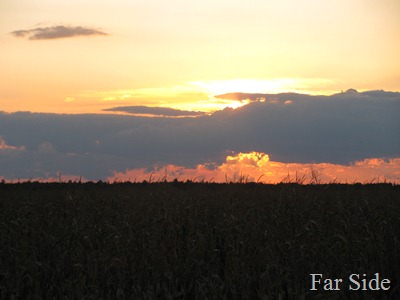 We watched the sun disappear under the clouds up on the prairie.

We stopped by the neighbors and got some onions. Barb shared her onions with Far Guy.   They have a very pretty Border Collie named Maggie. 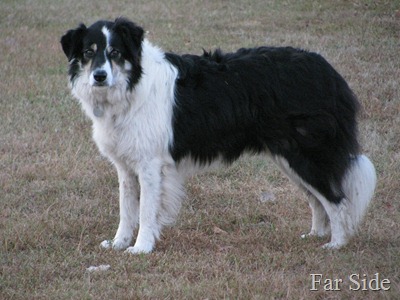 She is shy around people she doesn’t know.  The opposite of Chance, who thinks everyone is his long lost friend.  I never did get to pet her, even after I threw the ball for her and  a ball crazy Boston Terrier.    Maggie is about the same size as Chance.  He barked at her from inside the car and drooled on my seat.

Far Guy came home and cleaned  his onions, chopped them all up and put them in freezer containers to use all winter. He only had to stop a few times to wipe his eyes:)