We went up to Thief River Falls Minnesota to a train show on Sunday.  We drug the Grand boys and their parents with us.   Far Guy even won a subscription to a Train magazine. 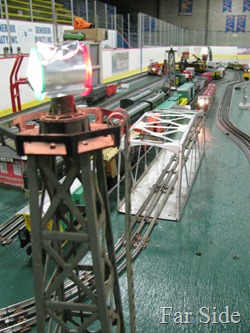 Since I worked on Saturday..we missed the first day of the show..it was held in a Hockey Arena.  That is an old Marx train headed into the silver trestle.  The show was okay, not fantastic..but sometimes it is all about the networking..I met two very talkative men and found out about a few train shows coming up in North Dakota and in Canada.  The Antique Shops were all closed on Sunday..but Dairy Queen was open! 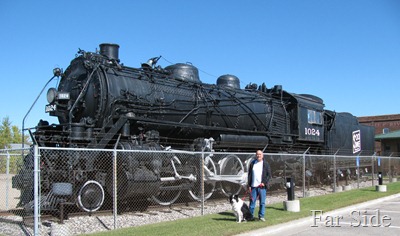 We stopped for a photo op, the train displayed is very much like the train engine that Far Guy has upstairs.

What were we looking for at the Train Show?  I was looking for cows with little stands that have little bumps on them.. Far Guy was just looking..it is interesting to see what different people have.  I think Far Guy bought an O scale truck that he will fix up and repurpose. If I had known how much his train collection was going to grow..we would have designed a room around a train set.

One of Far Guys friends from high school gave him his old train set from the 1950’s… a whole train set..can you believe it?  I couldn’t, I said “Surely he wants it for his grands?”  Apparently not..  Far Guy will just have to build more shelves.  He has lots of new to him “stuff” up there…someday I will take more photos and count all his train cars.  Pre war..post war..HO and O..I am getting to know all this train talk:)