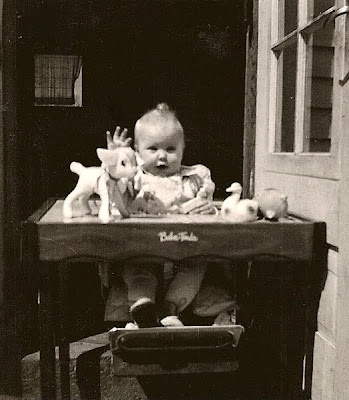 Me in 1952!
The Babee Tenda, a tip proof high chair play table on wheels. My Mother used it to corral me, I could play safely off of the drafty floor inside or outside out of the dirt and grass. It was an ingenious invention. I used it lots of times on my baby brother Jody, the straps that were used to buckle him in were all worn out..so I used a dish towel and tied him in..poor kid..trapped by his older sister! :)
Posted by Far Side of Fifty at 11:04 AM

....dating myself here, but I vaguely remember that same table for my baby sister!
Just the beginning of invaluable sources to contain the "baby".......and just look at all the "STUFF" they have now!!
..BABYS R US.. has more "STUFF" than you could ever imagine would ever be available ....oh those so many years ago!!

Adorable pic of you Connie!

That is precious Connie. You were a cute baby.

Your a cutie! Love the high chair!

Very cute. I think I have a photo of me tied into a rocking chair on the front porch :)

What a cute baby you were, Connie. I remember always tying my brothers and sisters to chairs with kitchen towels too.

That is precious Connie!

So adorable! I love your little topknot too!

I have pictures of some stationary device that I was put in as a baby. I remember seeing a picture of my older brother in it too. I don't know where those pictures are. My mom lent it to a brother and his wife and she couldn't imagine why they hadn't returned it after they were done with it. She worried about that for years, as if she were going to have anymore children.