I finished a pair of socks for Far Guy yesterday.  They are almost a matched pair!  I was doing great until it came to the toe!  Possibly I knit an extra row or two someplace....or perhaps it was just the yarn! 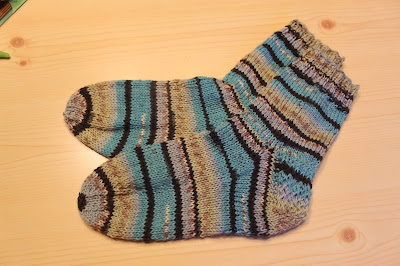 The yarn was Patons Kroy a color called Torquoise Jacquard.  I fit the sock to his foot several times...he thought it was strange trying them on with four needles!  I told him that I would only make him do this once...or twice and I would have a pattern to go by.   I knit socks two at a time, that way my old brain does stuff twice and makes less mistakes.

More socks will be cast on soon.  In my opinion casting on the Four Double Pointed Needles is the hardest part.

It is bitterly cold here.  Errands were accomplished.  I am reminded why I fill up when the car is half empty...it is too cold to stand out there for too long and I never leave the gas nozzle unattended....just one of my quirky self imposed rules.  I see other women starting the gas pump and then getting back in the car.   If we had a Full Service Gas Station that would be great...we had one I used all the time in North Fargo...Ted's.

No car wash either it is too cold for the one in town.