Finally after a year and numerous visits to the eye doctor I have prescription glasses that I can read with.  It was a struggle.  You probably cannot tell but the metal frames are charcoal and torquoise. 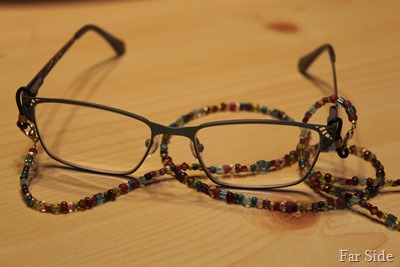 I am happy to put that all behind me, Miss “B” was not working when I picked them up…Far Guys favorite eye glass gal was working…we will call her Miss “M” for Minnesota Nice…

Far Guy had surgery yesterday.  He had a very suspicious growth and the last time I went with him to the Doctor I mentioned it and the Doctor and I agreed that the growth needed to go…basal cell carcinoma, we hope the margins are good and it doesn’t grow back.  The Doctor took out quite a chunk, I was surprised at the amount of blood and tissue that was removed…in small towns you can go in the procedure room.  Far Guy was certain that they would take half of his nose off…but 4 stitches later he looks pretty good.  I am glad he had it done…waiting would have just made it grow and be more difficult to remove.  FYI…Compound W didn’t work and neither did honey as those were the treatments that Far Guy has been farting around with for a long time.  Enough is enough!

I am happy to spend a few days at home whilst he recouperates…quiet days…he had me so stressed out yesterday my only recourse was to have a really long nap.

Glad you have glasses you can actually read with now.

Also glad the growth was removed from Far Guy's nose without any complications. Hope it doesn't grow back.

I love your comment 'farting around' ...it is something we used quite often years ago! I'm happy about the glasses too. Finally!

Those chunks they take out of the skin. Eeeks. But good thing it was finally done and Far Guy still has some nose left.

Praying for good margins, also. You all have dealt with enough medical issues.
They do those skin cancer surgeries in the office here, also at the skin cancer clinic. It is amazing how much they can remove from the nose area and it still look fine afterwards.
So thankful you got the right prescription but more thankful you got to deal with Miss M. Perhaps next time you are there, you should find out when she will be working - - - or else reschedule if she is there! Too much time and money is invested in those eye visits.

A good long nap is always a good idea!

So glad you’re feeling better about your glasses. Miss B should really be talked to. Maybe that’s why she wasn’t there! I’m also glad Far Guy got his skin stuff removed. That’s nothing to mess with. I laughed at your “farting around” comment. I hadn’t heard that in years. My Dad used to say it all of the time. Have a great and relaxing weekend.
Blessings,
Betsy

Good news about your glasses and FarGuy's operation. Something like FG's situation with his nose is never something to mess around with.

Glad you finally got your glasses dilemma resolved. I can't imagine not being able to read, that would be sooooo frustrating. Also glad that Far Guy took care of his nose. Those are things not to be messed with. Have a great weekend!

Always nice to hear good news!!! Lee has one near his nose to be removed in Oct.

All the best to Far Guy for a rapid and complete recovery.

Thank goodness--on both counts! Naps are in order. ;)

I know quite a few people who have had big sections of their anatomy cut away for the same reason. Hope that he recovers and that you can return back to a semblance of normality. Yay for finally having glasses that work! :-)

I hope your new glasses are everything you've wanted in glasses because you've waited quite some time for them!
Good for FarGuy, getting that suspicious lump removed before it got any bigger. I've never thought that honey or even wart stuff really worked.

Oh my goodness. Sometimes we mess around too long with our own treatments. Hope they got it all. And love the look of your new glasses

At least you will have glasses that work while you sit around and read and rest and recuperate.

The glasses thing would be sooo frustrating, glad you have got it sorted out now. I had a chunk taken out of my nose earlier this year. Turned out the spot was precancerous, so was happy about that. The surgeon warned me there would be a permanent scar, but I think it looks pretty good, and it evened out a dip in my nose from a previous operation. That also turned out to not be cancerous, but the nose got inflamed from the stitches and I lost some tissue, hence the dip. Hope Far Guy's turns out as good. I did have basal cell removed from next to my eye about 35 years ago.

I had a chunk taken off the top of my ear. We were on our way to Maine by plane three or four days later and I was still wearing bandages then and also a week or so later. It did not come back. Better safe than sorry.

Every time I don't read you for a few days something happens! That will teach me...maybe. I'm so sorry about Far Guy...glad he is home recovering with his nurse and guide dog!