This was Far Guys Dads last birthday with us. 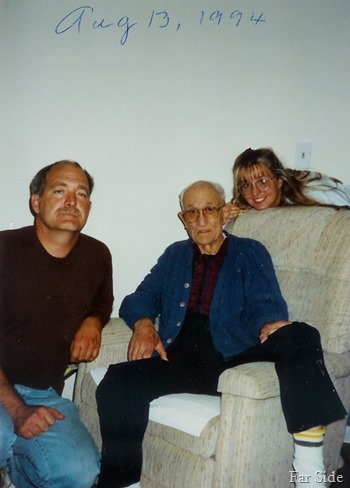 Far Guy, his Dad and our youngest daughter Jennifer on August 13, 1994.  We took Dairy Queen Ice Cream over to the apartment for his birthday.  A few days later he would undergo a surgery to improve his breathing…he had Alpha 1 Antitryspsin Deficiency but we didn’t know it back then.  The surgery was really hard on him and he went into kidney and liver failure, was transfered to a hospital in Fargo ND and died shortly after midnight on August 28, 1994.  We had been taking turns sitting with him.  Far Guy’s Mom was with him when he died, the nurse called us and we ran from the Hospital Hotel to the Hospital as fast as we could but didn’t make it there in time.  Far Guy’s sister said she never saw two people get dressed and out the door so fast in her life…we were both members of the Fire and Rescue Squad back then and were used to getting dressed and out the door half asleep.

This week would have been his 104th birthday and he died 24 years ago. He would be amazed at how things have changed since he died…computers and cell phones especially.  I remember in the early 1970’s when he was thrilled to have a CB (Citizen’s Band) radio in the camper and in the car so he could call us up and talk to us on move days…Breaker Breaker Channel__ for ??…we cannot remember what his “handle” was or ours either for that matter. Funny what we remember or don’t remember.

You have such wonderful memories...!

My dad was a ham radio buff, too. I still remember his "handle": W6-UDT, Uncle Dog Tear. And my dad has been gone for a long, long time. Thanks for the update about Chance. I'm hoping you'll be writing that he's better, poor guy. :-)

Your post made me think about my parents - who both passed away 27 years ago. My mother spent a lot of time researching genealogy. She would be so thrilled and amazed with what is available online now. Her methods involved a lot of letter writing.

My Mom's birthday was also August 13th. She insisted that I have a CB in my car in case I needed help on the road between home & the university.

I remember CBs too...we had one in our camper, listened to the truckers share where all the speed traps were. I suppose my dad wanted it in case we needed help. Or maybe just because it was fun.

My husband's aunt died this past Feb at 102 (and a half, as she liked to say). I wish I had gone to get her the personal pan pizza from Pizza Hut that she liked for her birthday. But I didn't, though I promised it to her the last time I saw her, not knowing she'd decline the next day and die. Sigh. Regrets.

Now you've got me trying to remember my dad's handle--LOL! Yes, funny the things we remember and don't remember. I found odd things I had forgotten entirely came back to me when the family was here for a visit.

We made a couple of trips to the hospital for two different people. One of them involved trying to get an older gentlemen to answer the phone to let him know we were picking him up, his wife called for him to be there. He meant me in his boxers and I helped him get dressed. My father-in-law gave us a couple of scary ride to the hospital. I ironically when he did die he was in our downstairs bed room and the people all came to our house.

I wanted to add the comment about how happy I feel about Chance being able to eat some now. We have Barney on microwaved baked chicken now all of the time with some added nitro chicken dry. I am cheering you own Chance.

We had CBs. I was the Operator, Lee was Captain Crunch. One kid was the Driver but I can't remember the other kid's handle. (He wasn't into CBs like the rest of us!)

I was gone all day yesterday, as I traveled to get my new Border Collie puppy, but I was thinking about Chance all day. I hope he is doing better. It was very difficult for me to know what to do about Scout when he started failing in June. Chance is lucky to have people that will honor his desire to have a life of quality. I will be thinking of all of you.

Great memories. When I think of the changes in the world in the last 20years, my Mom wouldn’t know how to cope with the technology we have now.
Blessings,
Betsy

The world certainly has changed in the past 24 years. So many of the "old folks" are now gone and we're the ones to fill that spot. It feels very odd.

It's wonderful to have those special memories.

I had to laugh as I had a cb radio and did the whole 'breaker-breaker' call out....made me laugh remembering that! LOL!