One morning my other baby brother opened the large doors to his shop.  A bunch of bats flew out and one hit him in the nose and scratched him. 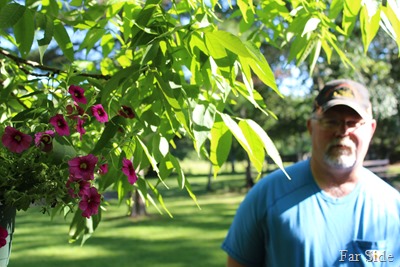 My other baby brother

After some discussion he was started on a series of rabies shots. He has one more shot to go in the series.  The shots are given in the upper arm.  He will be glad when he can put the shots behind him.

Years ago my parents had a fireplace without a screen on the chimney, the bats would come down and hang on the window of the fireplace…my brothers would get out the badminton rackets and slowly open the fireplace door to release the bats and they would swing at the bats flying around.  A great after church activity.

At our resort we watched the bats, they flew out at dusk and back in at sunrise, I would sit on the edge of the bed and watch them…they lived behind the chimney.  One year they decided to live between pieces of plastic that covered the door to nowhere…Far Guy collected a couple of bats in a peanut butter jar so the bats could go to school with one of our daughters.  As I recall…I startled them with a long handled tool and Far Guy captured a couple as they fell. (The door to nowhere was a door and a screen door about 10 feet off the ground with no steps outside the master bathroom…I put a nightstand in front of the door so it couldn’t be opened.)

When you are out on the lake at night the bats fly right over your heads.  Some tourists are unnerved with that activity. ( especially women who think that the bats will get tangled up in their hair)

We have a house that is made for bats because they eat so many bugs…skeeters are a delicacy for them.

Nowadays they say most all bats carry rabies…years ago we didn’t worry about it.

Bats were regular visitors to my sister's house. They flew in when she let her cats in and out and then tormented the cats by flying around the house. I am not a fan... when we used to take an evening swim in our pool to cool off before going in for the night bats would dive bomb the pool. I know they eat bugs but along with the rabies worry they are just creepy to me!

No bats in the belfry, or the house, here so far. I appreciate that they are around, but we could use more to control the skeeters here.

Bats scare me, partly because of the way they fly, but yeah they sure do scarf up the skeeters! :-)

I have heard that but find it hard to believe most bats carry rabies. Or maybe I just don't want to believe it. They are wonderful, graceful bug eaters. I always hope they are chowing down on skeeters! Don't like them inside the house, though.

I love watching bats. As you say , they do an awful lot of good around the area.

We see bats when we go camping but not so much in town. Maybe if we walked to the lake at dusk we'd see them. I didn't know that rabies in bats was becoming more common.

Thankfully we don't see bats around here, I am not scared of them but would rather not have to deal with them

Bats would always come into our Minnesota cabin. I hated the sound of them crawling the wall or crawling in the floor in the dark trying to get their bearings.

I'm glad your brother got the rabies shots. A couple of years ago, a woman in my community died from a bat bite.

All I can say on the subject of bats and fishing is twice in my fly fishing career I caught a bat in the dark. I didn't realize what I had caught at first till it began crawling up on the shore . There was no catch and release as I used the step on it till its dead method...:)

My husband and I handled a rapid dog. It did not bite us but we both took the series os shots! If we had gotten the saliva on a break in our skin we could have gotten rabies so we did not want to take the chance.

I say if there is a 6 percent change you will die take the shots. If 6 put of 100 are deadly I would not them around my house!

We watch the bats swoop and fly around at dusk at the lake too. Eerie looking things, but they eat the bugs so I guess they can stay. I always wonder where they go at daylight.
Blessings,
Betsy