June 11 2015 Finished fence, chored and grubbed some Carron Peterson here to sell me car. Plowed some.

Grandma was 30 years old that year.  She loved parties especially her own birthday party on the weekend closest to her birthday in June.

In the diaries Grandpa never spells her name right. He could have told us more about her birthday party…who came…what did they eat?  We don’t even get a hint of what kind of car he bought.

Their three sons would have been 11, 7 and 4 years old that year, it would be a few years before their fourth son would be born.  Grandpa doesn’t say much about them either…

Here is a photo of Grandma next to her Dahlias on the farm. 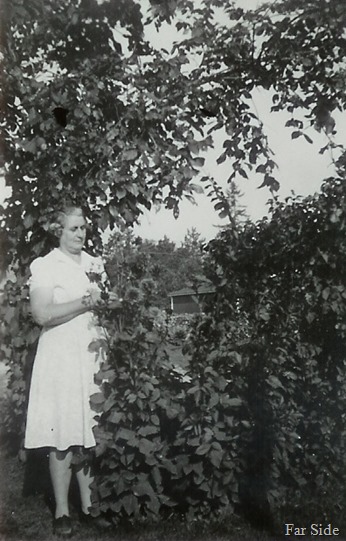 I am not sure when this photo was taken, probably in the 1950’s.

She was a wonderful woman, I miss her.

I love it. My aunt sent me a lot of pages from my Grandmother's 'book' of events which were short just like these. I often take them out and look at them.

Funny he kept so few family details. Makes me wonder, what was his purpose for keeping a diary?

With ancestry on my family it has made me feel
that I know the people of my passed personally.
Great story!

Yes, those were some brief little snippets, weren't they? And such a nice picture of Grandma and her dahlias. You are the best in keeping your relatives alive in spirit. :-)

Lovely photo of your grandma and her dahlias.

It is a Farm Diary, mostly about crops and what was happening on the farm.

She had a good shape on her at that age. My grandmother got "ample" as she aged.

Most farm diaries present the bare facts. My Mom wrote notes on calendars and then kept the calendars for years.

When I realize how I devour any details I can about my parents and grandparents, it makes me wish I were better about keeping notes about my life for my family to come. That is a beautiful picture of your grandmother and I really enjoyed reading those diary snippets. It reminds me of how my grandfather would have written about farming back in Nebraska. Blessings, Betsy

My dad kept a diary like that. Mostly kept track of what he did at work that day, what he ate, and if he went anywhere. No details. On our birthdays it just gave full name, time, length, and weight. I did not expect much more from a Swede. LOL! ;)

She was a nice looking woman, yeah the diary sounded like a man's diary

Nice photo of your Grandmother beside her Dahlias.
Isn't it too bad so much information is gone forever because no one thought to write it down. My Grandfather, when asked how many sibling he had named 3 or 4 brothers then added " ..and 4 sisters, names not important". Kind of gives you the impression he was quite the male chauvinist.

I must remember to add more detail to my own journals!!

My wife’s father could never spell his own daughter’s name correctly. It kind of exemplified his attitude towards not caring about details.