I have not been to the movie theater in town since the fire 11 months ago.  The fire was contained to the sign…no one was hurt. 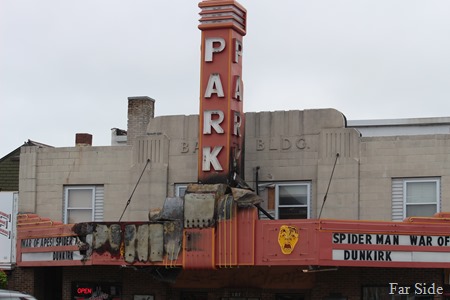 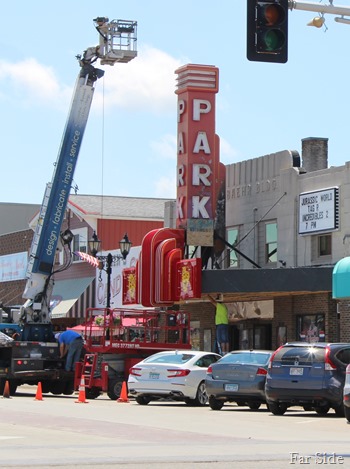 A repair is finally happening.  I wonder who they were insured with?   It sure took long enough. I heard that you can rent the old crying room for private parties…the bathrooms in the movie theater were something else…you enter the bathroom and then had to go up two or three steps to go potty…Far Guy says that the basement of the movie theater was actually deeper than the sewer pipes so the stools had to be raised so you know what would flow down….flowing up wouldn’t work. (Insert smily face. )

Main Street has been fairly busy with tourists…we hardly ever go downtown…I heard that one of the cafes bought out the paint and glass place and they will expand.  I also heard that there is a new venue for large gatherings happening at the old John Deere place…and a old cafe on Main Street has some good Walleye Gumbo.  I have never tasted Walleye Gumbo.  It is rumored to be $9 a cup…tourist pricing. The Ben Franklin Dime Store is still for sale.  There are brand new public bathrooms on Main Street…whatever will the businesses do with their signs that said bathrooms for customers only or “No public restrooms” the new bathrooms are only open until 10 pm after that you will have to find some place else to potty. The Burger King got a whole new facelift..we don’t go there either. There is yet another auto parts store going up in town…that makes three auto parts places on the same block…there is a rumor that there was a really ugly divorce and everytime the former husband puts up a new store his wife puts one across the street…There is also a new dog park in town…just on the outskirts…so much for the big city update.

I just love reading your blog. Thanks for the update on PR.

It's been many, many years since Ive seen Park Rapids but it sounds like it's doing quite well for itself. $9 a cup for gumbo! That's worse than beach prices.

Good gracious- 9 bucks for a cup of gumbo- that's ridiculous!
Have a great weekend!

The no public restroom signs will probably stay. Out here in CA there are lawyers that have made a living by finding restrooms in older businesses that are not ADA compliant, and they then sue them and settle out of court to drop the suit for less that it could cost to bring the bathroom up to code. The answer was to put up the no public restroom signs, which shielded you from lawsuits.

What a cool old movie theater! Is it on the Historic Register?

Well, I Googled Park Rapids to get a handle on where in the world you live. I was never quite sure. We were in my old neighborhood recently, and it's interesting which towns fade (Molalla) and which towns thrive (Canby).

The gumbo price is ridiculous! Definitely tourist price.
Love the movie theater sign. Reminds me of the Fargo one.
That's funny about the ugly divorce. Now the entire town is forced into taking sides by where they shop--geez! ;)

I think there are, or maybe were, a lot of Park theatres! Fun small town update!

I remember when you told us about the fire in the theater. I am so glad it has been repaired as these old ones are really a part of history. When you mentioned the Ben Franklin Dime Store I was hoping you were going to say it was still open. When I was a child the old dime stores were my favorite stores!

It is still open but it is for sale

I wonder if young people know what a crying room is. Be fun to ask them. My daughter once lived in a basement where you went up several steps to sit on the "throne" and we all thought it was hilarious. Making it even funnier was the toilet seat was a soft plastic with a skunk picture on it.

Glad to hear the goings on in the big city. That's a funny description of why the toilets are so high up in the theater. Well, it makes sense. :-)

I actually went to a movie there once! GN and I made a trip up to Nevis and we headed to PR to be tourists. I don't think we needed to use the restroom and... I can't remember the movie we saw either, but it was probably a kid movie, or kid friendly. Now that walleye gumbo better have some real walleye in it at that price!