One by one my Maternal Grandparents immediate family is dwindling.

There are only three children left…my Mother and two of her brothers Al and Kenny.

This is a photo taken in 1961 at the farm where I grew up.  Those sections of boards going horizontal used to mark the walls of the old pantry. When my parents remodeled the house in 1959-1960 the pantry walls were removed and a picture window was added. The drapes were off white with shades of green tropical plants and small pink flowers…wall to wall drapes.  My Mother sewed the drapes.

This is a photo of my grandparents and their children with their spouses in 1961. 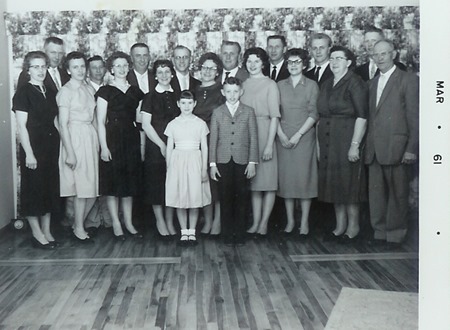 from the left the stars ** are living persons

**Madeline and **Jake (my parents)

Marion and Marvin both deceased in 2004

Delbert in back (2009) and Delores (2018)  both deceased.  Aunt Delores died last Friday night/Saturday morning in her sleep.

Dennis in back and **Judy  Uncle Dennis is deceased (2015). My Aunt Judy is Delores sister…brothers married sisters.

Elsie and Albert my Grandparents both deceased in 1995

**Al (standing behind my Grandparents)  He wasn’t married in 1961.  He did marry **Pat, divorced and now is married to **Donna.

In front is the Twins

Karen she was married to and divorced from **Al Dean  She is deceased (2017).

Two children died before this photo was taken Alfred 1947 in and James in 1948.

I saw my Aunt Delores a few weeks ago.  She asked “Do I know you?” I said “Yes I am Connie” she replied “Of course you are” and gave me a hug. She had been more confused since moving into assisted living this spring. The funeral is later this week. What a blessing to sleep away during the night. No long drawn out hospital stay or convalescing in “the home.”

Goodness. I look back on our family and realize that I thought we had a large one but we don't really. There is a family reunion for my husband in August and I'd like to take his mother and him to it. What a great family shot.
Interesting that my husband has an Aunt Delores who can't recall people either!

At first glance I thought the drapes behind them were a crowd! That's quite a family. So sad when another one leaves us. Of my mom's generation there are only two left. Mom is in her 90s and her cousin, 88. So lucky to still have them! Sorry for the loss of your Aunt Delores.

Sorry for your loss, but glad she will no longer have to deal with the confusion and the issues that go along with that.

You have a very long lived family, but eventually we all head into that good night. I'm glad her passing was an easy one. You are also very fortunate to have your parents with you today. Mine didn't make it out of their sixties.

My family has dwindled as well - my sister, her husband, and me remain as well as my nieces and nephews.

You are so blessed to have this great pic.

My parents generation is all gone now except for one Uncle. We are the older generation now and I’m just 58. My MIL had 16 kids in the family and my FIL had 9. All were married when we got married so I immediately got 40 aunts and uncles! That was a shock as I only had 6 before.
My sympathies on your Aunts passing. Life is never easy is it?
Blessings,
Betsy

That's the best way to go--yes!
You realize how many years have gone by when the generation before you and some of your own are now gone. What a lovely family! :)

My sincere sympathy upon your loss. Yes, it's very hard to watch the "old guard" pass away, one by one. My mother and all but one of her 6 siblings are gone. The one left, which is my godmother, Aunt Charlotte, is 86 and I speak to her regularly. I can't bear to think of the day when she's not around anymore. Prayers coming your way, Andrea xoxo

I'm glad you still have family here.. mom & dad, sister, brother, all aunts & uncles.have all passed. My first husband passed also, but God blessed me with a new one. God bless you Connie!

Isn't it hard to see a whole generation leave us. I am the "baby" of our family so my parents and all their siblings have been gone for quite a few years. I am now seeing my cousins pass, one by one, and I have lost one of my two brothers. When you are a child and the youngest you don't realize that you will watch most of your family leave before you. It's a little hard sometimes. Cherish whatever family you have and don't forget to ask those "family history" questions while they are still around!

Sorry for your loss. It's hard to see the last of a generation.

Sorry to hear about your aunt Delores. You're right that slipping away before you have to go to some "home" is best.

A sweet sorrow, for sure.