Years ago we had a small greenhouse business.  It was hard work with long hours.  I hated watering and felt like I was attached to a hose 12 + hours a day. We opened the business in 1999 and closed it in 2007 when potting soil, plastic and heating costs went through the roof…that was also the winter that Far Guy was diagnosed with Trigeminal Neuralgia.

We began with just one greenhouse and expanded to two and then added a small Perennial house.  Far Guy had his own Greenhouse where he grew vegetable plants in four packs… and many tomato plants in small pots. He grew special order veggies.  I grew only flowers…and kept my special orders over in his greenhouse. 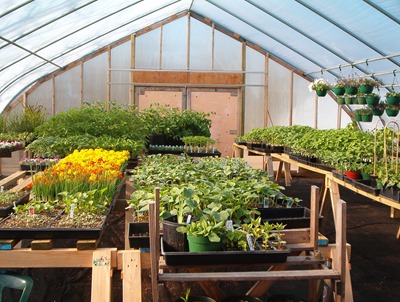 This was Far Guy’s Greenhouse.  Now a days he uses it for a work/woodshop. I use part of it for a glass studio to make glass flowers.  We have a warm dry place to work on rainy days.  I have many projects stacked up out there to work on.  Out of sight out of mind.  I should really take a photo in there but I will spare you. 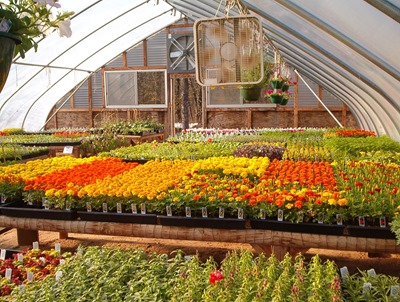 As you can see my OCD or CDO made an appearance.  Tags just so and banks of color.  Aren’t those Marigolds pretty!  Here in Minnesota people don’t plant much of anything until mid May to June 1st. We will sometimes get freezing temperatures into June.  This greenhouse is no longer here it was sold after we closed the business.

I have been thinking about what I want to plant this year out in my little flower garden under the bird feeders…Salvia of some sort for the hummingbirds…and maybe Impatiens. Some pansies for sure. Years ago I had a Day Lily garden out there then they froze out.

I have my Solar Lights…last weekend Far Guy told our Grandson Adam that it looked like Las Vegas at night in our yard.

Do I miss the business…sometimes…I miss the people that came back year after year.

How beautiful! I have some shots of our shed that would horrify anyone who is a neat-nick. However it wasn't always that way.
I normally plant by June 1st, I've had too many frosts occur and kill out my seedlings!

I never liked marigolds and now I have a fondness for them plus those plants you mentioned. I'm not sure on the Salvia though...but if hummingbirds like them? I am tempted!

I bought Mystic Spires salvia this year to keep on the patio and the hummingbirds love it!

All those flowers sure are pretty. I haven't planted any flowers yet as the night are still too cold.

Your greenhouse is (or was) gorgeous. I think I'll put some salvia on my front porch for the hummers, too. I would have been one of your customers. :-)

I enjoy coming to your greenhouse, your plants always looked so healthy. I also like solar lights.

The flowers and all the plants look great. Now it is a work space so glad you have a space like that for your retirement hobbies. ;0

I purchase plants mid-May but baby them by putting them in the garage at night until I know the chance of frost has passed.

Love the greenhouse: I can only imagine the long hours involved in tending so many plants.

All those beautiful flower hide the colossal amount of work they must have been.
But nothing like having a beautiful product as opposed to selling, say, auto parts, or work boots.

That is a beautiful picture but I can only imagine the amount of work that went into it. We can't really plant here until after Mother's day, (that's the unwritten rule), because of frost danger. I'm glad I found your blog again. Somehow it disappeared from my blog list a while back.
Blessings,
Betsy

Both greenhouses look wonderful and so neat and tidy. It is great you could keep one for projects. Did you enclose it in wood or something else or is it still the same as it was before? I would love to have that much room for projects!

Your green houses were well kept. I can see why people came back year after year. :)

In this world you either love gardens or you don't, I like looking at pretty flowers but do not like gardening in any form

Nope it is the same as before:)

Both green houses are really neat but yours is tidy! What a wonderful place to work and see all that beauty. (And I know it must be Hard Work!)

Very nice but yes I can imagine how much work it all was for you both , I like marigolds especially the original ones they have a smell that bunnies don't like so I plant them in the front of all of my flower beds and used them in my veggie gardens when I had them to to ward of the bunnies and it has worked every time . Thanks for sharing , Have a good weekend !

Your greenhouse is very pretty. I know what you mean about watering, I hate having to water. Is that the same plastic on the other greenhouse? I can't imagine it lasting that long. Nice bright, sometimes warm place to work though, well on a sunny day!

Your greenhouses lasted through the years. It must be nice to have all that space now for all your projects.

Do you ever plant begonias - - - the ones with the big colorful leaves? How about sunflowers at your house since you have bird feeders.
Knock-out roses are really popular here in the south - - - no care and they bloom all summer.
We have fallen in love with shade plants after taking a class last summer. Even with all the trees we have cut, we still have a LOT of shade. Coral Bells (Huechera?) have many color varieties. We have cinnamon curl and Red Lightening. This year we bought Blueberry Ice. We have BUNCHES of Hosta - - no ferns until this year. We bought a "Gorilla" Fern. It has silvery leaves and is supposed to grow 3' x 3'. We shall see.
This is the first house we have ever lived where it is difficult to grow pretty flowers - - not enough sun and too many tree roots taking the water - - also clay soil! We are building it up though with each plant by mixing soil conditioner and mushroom compost in the "hole" where we plant. Also, we have hardwood mulch that is slowly building up some black dirt. Fun stuff - - if we don't run out of energy keeping up with it.

Thanks for showing us your greenhouses! We have done business with many, but I would not want to be in the nursery business. I like the freedom of gardening in my own yard, and leaving it when I want to.