Chance had to go out at daylight.  We were serenaded by many birds…then I heard a tweet tweet tweet sound and a Indigo Bunting flew near the patio.  It was almost as if he was announcing his arrival.

I went in and got my camera.  Of course by that time he was gone. 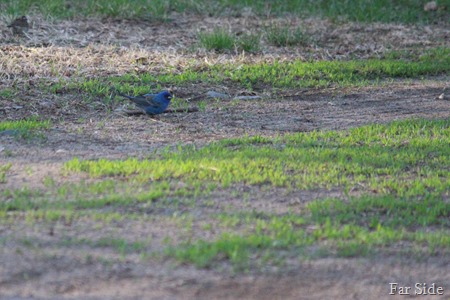 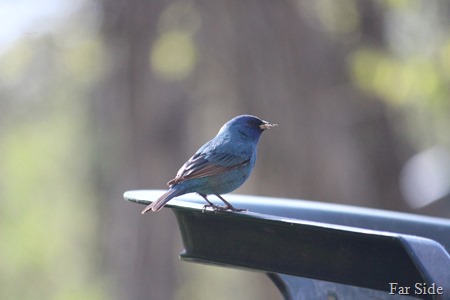 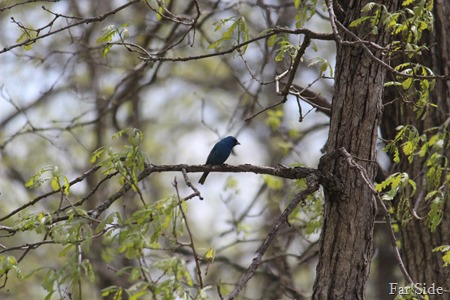 He and one of his pals hung around all day.  I did not see the females…they are brown…so they blend in with other birds.  Typically they only stay a few days a week at the most…but I can always hope they will nest here.  They are ground feeders and like the thistle seed on the ground and they visit the birdbath.

It rained, Chance and I had a nap.  Far Guy worked in the woodshop.  The Buntings were the highlight of our day.

Oh how beautiful! It has been a while since I've seen those birds. I've been watching and listening to the Orioles around the house and the warblers in the woods! I do love their songs.
It may rain this afternoon. I am looking forward to a nap soon! The donkeys voiced alarm from 3 am this morning until I got up at 4. I wonder if coyotes were around.

The only time I've ever seen one was while visiting family in Pennsylvania. I think they're one of the most beautiful birds ~ thanks for posting!

I don't think they are around these parts, so I will just have to enjoy them through your pictures. I do also hope that they stick around and nest nearby. Sounds like everything is going well up there in the Far North. :-)

The buntings would have made my day, too. I haven't seen one yet this year.

If buntings stayed, they would make your day everyday.

You do get wonderful bird visitors coming through!

They would be the highlight of my day also!

Very pretty little birds, not something we see here I don't think.

I will never expect to see on but I do know that they are out there. I just saw my first blue jay in a very long time and of course it was flying into our patio glass door. He was ok but sometimes birds don’t survive it. I doubt I would know a bunting call.

Glad you had a good day!

Same story here. We had four and two have been here for almost a two weeks. I do hope they stay the summer.

Just once in my life, I saw one of these at Nalley Valley house. It was gorgeous.
Love your header collage, too.