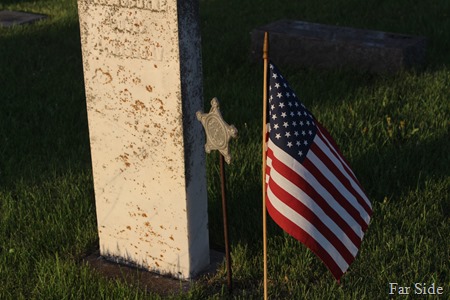 It was called Decoration Day until 1967 when it was offically declared Memorial Day and became a Federal Holiday.  After World War II many people began to call it Memorial Day it was just not official yet.

At any rate it is a day that we set aside to honor those who died in war. It has evolved into a day when we remember all those that have died…perhaps the cemeteries should look nice when people come to visit the graves of the war dead.

We only visited two cemeteries this year.  There just doesn’t seem to be enough time to get to all the cemeteries I would like to visit.

Indeed. I think it could be also a remembrance day. Not many people celebrate as such anymore.

Hubby and I visited the cemeteries on Saturday.

I will honor my own fallen today, and I think about all the others who have given everything for our country. Blessings to you and your wonderful family today and always, Connie. :-)

When I was younger, I went to the cemetery with my Mom to decorate the graves. Now, I do it on my own, as I'm the only one in my family who has any interest in keeping this tradition.

I like to visit cemeteries also. And I think they should look nice all the time, but for sure on Decoration Day!

I love all those flowers.

I will remember, and try to reconcile war as I strive for personal peace.

Sadly our small town high school no longer has enough students to muster a marching band for the memorial service, The local cemetery is no very quiet on this special day just across the highway from our house...

When we lived in Omaha we always visited the cemetery’s where our family and veterans were honored on “Decoration Day.” Here in Spokane we have no graves to visit and it just doesn’t seem right.
Blessings,
Betsy

Interesting how the day has evolved.

Memorial Day is a better name than Decoration Day in my opinion but whatever it is called is ok as long as we remember them, lest we forget

Thought about you today, remembering your posts from past Memorial Days--and the photographs, too, of course!

I remember them but sure wish there was no reason to. I wonder what contributions they would have made to society had they survived. Peace is a distant dream evidently....there is always war somewhere and people dying from it.
Beautiful picture of the cemetery.