The Class of 1968 is having their 50th Reunion in the Fall.  So much planning and problems to sort out…especially if you are a worrier like my husband.  There were 157 graduates that year.  He has found all but two.   I think he has given up on locating them. He would like to contact them all….Dennis M. Bell and Thomas L. Byars where are you?

The “group” think they have a place for the doings. It doesn’t help that some of the female classmates have their own meeting after the meetings…go figure.

My husband has a list of all those who have died…3 were classmates that did not graduate with them but attended school with them for many years and 21 class members that graduated are deceased. 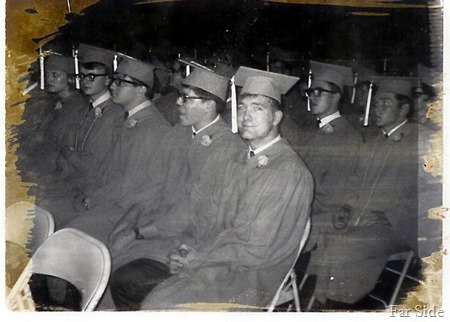 Only three of the seven people in this photo are living…Far Guy smiling…a Cardiologist…and an Optometrist.

I took this photo in the high school auditorium with a little camera called a Polaroid Swinger. Commencement was on May 29th that year at eight o’clock in the evening.

The gowns are a Blue /Grey color.  They were kept downstairs in a room (Civil Defense Shelter) off the hallway that led to the Annex.  You had to go in and be measured with the gown on…as the school wanted them to all be about the same length…not sure why that mattered. Then you selected a hat …one that wasn’t too big or too small…it had to be just right…then you had to sign for everything…and had to take it all to the dry cleaners before returning it.

The class flower was a yellow rose and their motto was “We are not flowers in a greenhouse but trees in a storm.”

I remember Polaroid Swingers. They had a strap to hang from your wrist! Your photo has held up pretty well all these years. Bless FG for continuing to take on the work for his class. It doesn't sound like much fun.

Look at that Far Guy looks like a movie star.

Kudos to your hubby that is a huge undertaking (class reunion) - so did he head over to the Vaegemast Cleaners with his cap and gown before returning? I was just looking I am not sure when they shut the doors.

It made sense for schools to own the caps and gowns. My school rented them from the company that also sold class rings. Now, the student purchase the cap and gowns. Aaah yes, the group that meets after the group. . . I've seen that happen a few times.

It's sad when you discover classmates who've left us. I was Brainerd Class/72 and more than I expected have died. Interesting post!

Yes I think they were still open then. I recall going in there many times:)

A couple of friends and I worked on several reunions and it was fun. Searching for members was the hard part. Everyone was always so complimentary of the work we did. And we tried to keep the cost down. Haven't had one for several years. Next year would be our 70th.

That seems a high percentage of deceased? These days with all the social media, it must be easier to find people. Hope the reunion is lots of fun for those who are attending, and all the hard work is appreciated!

Yes, my high school 50th is this year, too. I can't attend, but I'm sure they will have a good time. We've had reunions every five years. I made them all until the 35th--for health reasons, of course. I think they are still trying to locate a few people from our class, too. Now you have me wondering how many we've permanently lost. How time has flown by. Have a great time, Gene!! :)

Love the picture! Time does fly by, my graduation was in 1970 so I guess there will be a reunion in a couple of years. I remember the Polaroid Swingers - I had one.

That's a neat picture. I hope the reunion is a success, I'm sure a LOT of work goes into organizing such a 'do'.

No school reunions for me, not something I would go to anyway

That's some serious research to find all but two classmates.

Wow, 50th reunion! I haven't been to any of mine, but I wouldn't because my school is in North Dakota and I am about two days worth of driving away. Besides, I hardly remember any of my classmates- there were so many. (It was a huge school). This would be my 42nd reunion...wow! Anyways, I hope FG finds the remaining members and the reunion is a huge success.

I went to my 50th five years ago. I was struck by all of the old people in the room.:-)

I've never been to any class reunion, but sometimes I wonder what happened to this person or that. It was so long ago now! Love that old picture, Connie. :-)

MY 50th this year is really one that I would just like to avoid. Maybe I can make the supper as I like to eat. Our small class is only one down but we were only 25 in number.

I guess ours was last year...class of 67' but it was a private boarding school so everyone was from somewhere else. No one kept in touch although a few contacted me in the last few years but after 50 years....it's a little late to try and recapture the friendships. I've moved on and hopefully they have too.

I think I found Thomas' daughter.