The lower level window across from my desk was a challenge.  I said we should clean it in place…Far Guy said “oh no we can open it.”  Huh?  It is a bugger to lock once opened it has to go back together perfectly…the stars must align and the moon has to be just so and if you do it on the second Sunday in a week you might get it to latch.  In the summer I don’t worry about it…but it is winter. 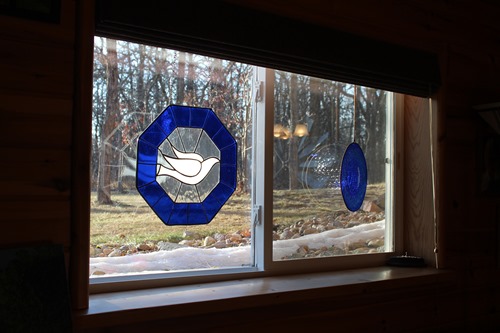 Yes that white stuff is snow.

Usually I sit outside cross legged in those rocks to wash the outside of this window…I always wonder how fast will I be able to move if a snake comes along…well I didn’t need to worry about that yesterday but I also didn’t want to sit down in that snow.

We finally accomplished the washing and waxing of the window…Far Guy helped and then I sent him inside to be the pointer…what you don’t need someone to point where the window is smeared?  I do.  ( Yes I wax our windows…I used to use a product in a pink can called glass wax…now I use something called Glass and Silver Polish….it helps the rain/snow slide right off a window without leaving water spots.  I waxed windows all the time at the resort…many many windows.)

Now we have to get the window to latch…let the adventure begin.

Well he struggled, I struggled…at one point he was outside pushing on the edge of the window freezing his butt off, while I was trying to latch it from inside.  He came in to warm up. Then I did it…I opened it once again…someone said “You didn’t open that window again did you?” accompanied by a sigh that could have been heard in the next county…. ummmm yes… then I closed it firmly and low and behold it latched. I DID IT!!   Far Guy was amazed…howdidyadothat?  Just lucky I guess.

That window has pretty stuff on the ledge too…it is all waiting in the kitchen…after the big struggle I was too tired to put everything back…of course everything had to be moved under this window …and what better time to scrub the floor and give the grout a really good clean. 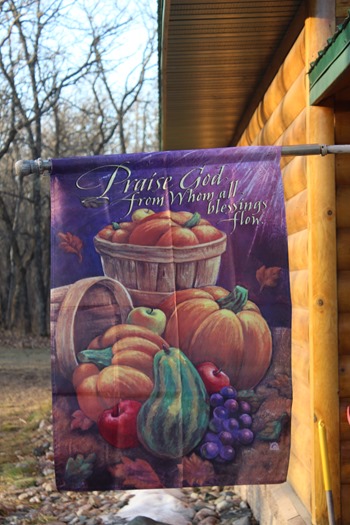 I finally had a chance to put up my Thanksgiving flag.

Labels: Fall projects, House, Household stuff, what a pain in the butt