You know what they say about curiosity?    It killed the cat. 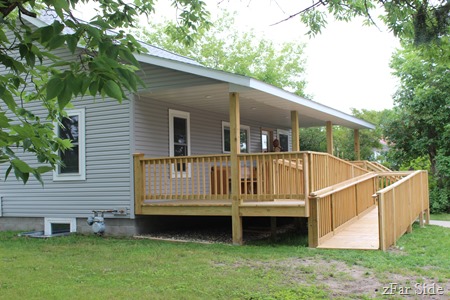 Far Guy has been curious about his old home place ever since it was sold and then it got a new basement, which made him even more curious.  Then they moved the couch in front of the window and put up blinds.  There were always cars there during the day but hardly ever at night.  We knew that property was zoned commercial.  I told him I thought it might be a group home or something….especially after it got a handicap ramp.

One day when we were in town, he said “I am stopping there and knocking on the door.”  Okey dokey I will wait for you in the car (with my camera).

As soon as he knocked on the door I knew I should have accompanied him.  A Chihuahua barked…it was almost like old times. (His parents always had a Chichuahua.)

He was welcomed warmly, as he told the lady at the door that he grew up in the house.  It is a meeting place for people who need some kind of assistance with their lives.  Not sure what kind as he didn’t take the brochure that was offered him.  One of the clients said “Better follow him around, he might have hidden money here a long time ago!”  Another client said “If you lived here maybe you knew my Dad.  In fact he is in the truck parked outside.” 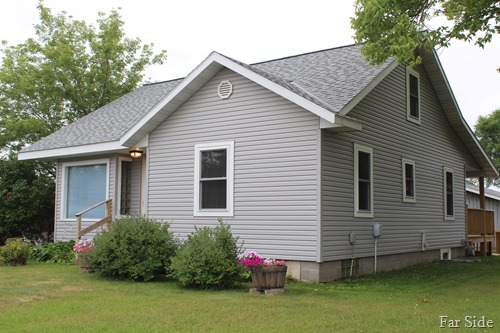 Well…  I was walking around to the sidewalk taking photos outside, when I passed a truck I said Hello and kept walking.  On my way back the fellow held out a wrapped peppermint candy…I said “What is this sweet things for sweet things?”  He smiled.  I said “Thank you and headed for the car.

Far Guy got a quick tour. Instead of walking into the old porch you walk right into the old dining room which is a reception area.  He looked into the bathroom and discovered that they had moved the bathroom stool to where the bath tub used to be…he opened the downstairs door and said to himself yup still those step old steps.  He was invited to come back again sometime with me and my camera.

When Far Guy came out of the house he walked right over to the pickup and shook hands with the occupant.  They knew each other a long time ago as boys growing up in the old neighborhood.  He gave Far Guy a Peppermint candy too.