Wistful Wednesday: My Dad in Korea

I should have taken notes but I will recall what I can.

Dad registered for the draft when he was eighteen.  He was supposed to go into the service but WWII ended, he was 24 years old when he was drafted and sent to Fort Leonard Wood, Missouri.   He married my Mother just a few days before he departed on October 16 of 1950.  At Fort Leonard Wood he helped to clean out barracks.  Soon he was off to Camp Pickett Virginia…where he cleaned out more barracks.  Since the end of WWII nothing had been done in the Camps, they were filthy and in ill repair, after WWII ended the Camps were ignored…but now they were needed to train troops that would be sent to Korea.  The first troops sent to Korea received no training, they were just sent to plug the holes until reinforcements could be trained. 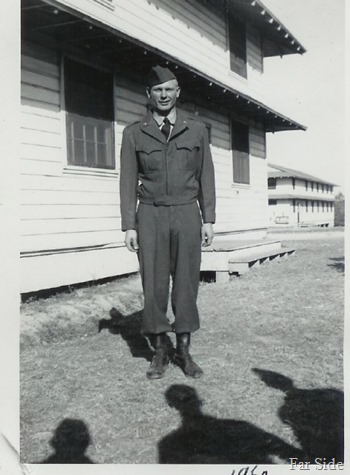 At Christmas time 1950, my Mother took the train from Minnesota to Richmond Virginia.    Near Camp Pickett they tried to find an apartment but were always turned away when landlords found out my Dad was in the military.  My Mother returned to Minnesota alone..well not quite alone…my name could have been Virginia.

In February Dad got a leave and returned to Minnesota for a few days. 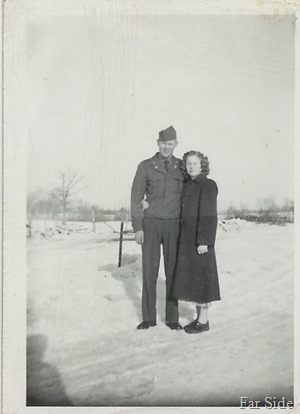 Then he shipped out for Korea the end of February 1951 he went from Camp Pickett by train to San Francisco and from there departed for Japan by boat.  In Japan they boarded a plane for Korea, in Dads words “a rickety old cargo plane.”

He was assigned to the 5th RCT (Regimental Combat Team) and made it to the front lines, when he got there he was assigned to a young fellow who said “You are now a BAR assistant.”  Dad didn’t know what a BAR was…Browning Automatic Rifle.   Dad was good with hunting rifles so he was a good shot, since they were short of ammo they were told to make every shot count.  In two weeks he was no longer an assistant. 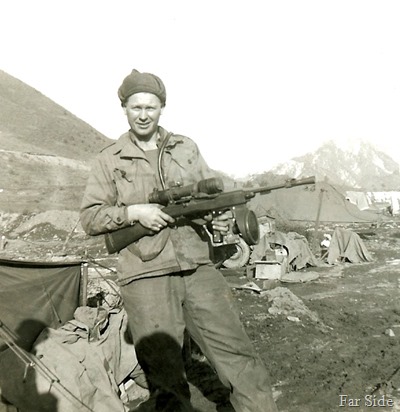 Dad was supposed to be in Korea for three months.  What you see in the photo above is what he was issued for clothing.  The three months became six, the six became nine, the nine became twelve and finally after thirteen months of sleeping with one horse hair blanket in the mud and snow he was sent to Japan and from there after being deloused three times he was sent by boat to Seattle.  There was no welcome there.  He went to Camp Lewis in Washington, from there he was sent to  Fort McCoy in Wisconsin.

On leave he traveled by train to Frazee Minnesota, walked over to the Creamery where his brother Wilbert worked as a milk truck driver.  Uncle Wilbert gave him a ride to my maternal grandparents home where my Mother was found with her hair up in pin curls, she went running upstairs to fix her hair…I was in the crib.  It is said that “It was almost like she recognized her Dad right away, didn’t fuss or cry just sat in his lap.”  I was six months old.

Dad had to go back to Wisconsin at Fort McCoy.  He would return in two months on leave again. 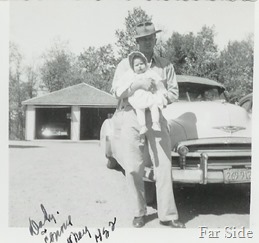 My Dad and I in May 1952
He finished out a couple of more months at Camp McCoy and was discharged in July of 1952. There was a small welcome home party for him hosted by relatives.

My Dad was one of the lucky ones coming home. 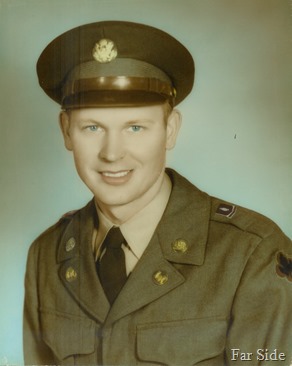 Growing up we heard a few war stories here and there, Dad didn’t like to talk about it much.  I know he was cold in Korea, he talked about frostbite and wiggling your toes when they got cold, and of the wool socks his Mother knit and were mailed to him…three pair were stolen after Dad washed them and hung them out to dry so the last pair he never took off. He hated garlic, the smell of garlic nauseated him…I think there were garlic fields in Korea.  The North Koreans and the Chinese trained young boys to kill however they could with guns, swords or knives…

Your story brought tears to my eyes....we can never do enough for our Vets !! Thanks for sharing your father's story.

How wonderful you have all these details, and what a handsome young guy. My dad entered the service and WWII when he was 19 years old and he didn't like to talk about it at all. I only really heard one story from him -- how he survived a typhoon that killed many by hanging onto a palm tree for dear life.

I am so glad you posted this story that your Dad told. So few war veterans are willing to talk about their experiences and I don't blame them. My dad (a WWII) vet barely mentioned what he did. And they all say the same thing "War is Hell". Tell you Dad "Thank you for your service" from me.

My heartfelt thanks to your father and I enjoyed these pictures very much. Thanks for sharing with each of us.

What an ordeal Korea was, for everybody. I was very moved by the memorial in Washington, which showed the men cold and miserable. Your dad's story just made me grateful for his survival. My heart is full and I'm glad to know he's told his story.

Good work to record this. I'm doing research on my hubby dad. He died in 1951, after coming home safely from WW II.

I'm glad your Dad shared his story with you and the reporter: so many are lost to history. We owe a debt of gratitude to the brave men and women who have served and continue to serve in the military.

Interesting story. My husband was stationed in Korea long after the war, he was up on the DMZ, said it was freezing cold in the winter and hot and humid in the summer. It was the smell of Kimchi he hated, fermented cabbage.

What a different age. You crossed the country on a rain and the pacific ocean on a ship. War was totally different as it was mostly hand to hand. Here the Korean War is often called the "forgotten war"

One of your grandsons looks a lot like your dad...Noah?

What a handsome man! So sad that the Korean War seems to be one of the forgotten wars - much like the more recent Desert Storm. My Dad served during that time too but never left the states.

Your dad was sure a handsome young man. My dad was in the navy and stationing in the Philippines at the end of WWII. He wouldn't talk about the war, either. This year he's gone. Would have been 95. War is hell.

Thanks for sharing your dad's story. My husband was in the navy from 1948 to 1952. He enlisted for three years. Truman extended enlistments so he was in an extra year. Saw duty at the Inchon landing. Doesn't talk about it but we have pried a few stories out of him.

What a lovely post. It's great that you didn't fuss or cry for your dad. I like the photo of your folks. Look how tall he is! The Korean War numbers are astounding and so many MIAs. Small world though... my grandma worked at McCoy!

Thanks For the story of what and who made our childhood great.
Our Fathers paid dear for us.

Wonderful story about your dad. You must be so proud of him!

Richard served in the Army in the early 1950's too! He spent his time in Germany. I like that you put this story here. We have to write them down when we hear them or they will be forgotten.

How young they were and what a handsome couple. I think it's amazing that anyone survives war either physically or mentally. I never understood why they wouldn't talk about it but so many would watch the war movies...maybe just trying to make sense of it all somehow.

Hi Pauline, Yes Adam more than Noah in my opinion. But my nephew Ben is the spitting image of my Dad.

Your dad summed it up in three short words.

This was a great post - so much of that time many of us don't understand but nevertheless we will not forget. Thank you to Jake for his service ~

A humble thank you..

It is a great read of all that your dad shared. I have known men who were Koren Veterans but never heard any stories. Again I am glad he got to go out there. I am glad your mom talked him into going. If you can survive Korea he sure could survive this kind of trip.