Far Guy’s Uncle Archie was the speaker at the Memorial Day Service in Park Rapids Minnesota. 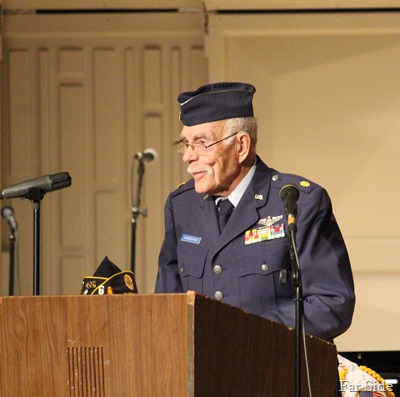 His career spanned 23 years in the United States Air Force. He was a Air Policeman, Personal Clerk,  Navigator Bombardier and a Plans and Operations Navigator. He had many Temporary Duty Stations: Spain, England and NATO Countries.  He served nine months in Vietnam.  He went into the Air Force a Private and retired a Major.

He says “God was my navigator!”

He gave a fine speech.

I won’t share every story he told….but a few.

As a small child he recalls going to the cemeteries on “Decoration Day” with his Mother and flowers she had gathered. (No doubt Lilacs, Iris and Peony as that is what is blooming most years the last Monday in May.)

December 7, 1941.  The family had a small Coronado radio that kept them updated on the events of the war.  The batteries were as large as the radio.  Soon his oldest brother would be working at the B26 Bomber Plant in Omaha Nebraska, another brother was in the Army stationed in Kodiac Alaska, his other brother was his eighth grade teacher.

About his time spent at Bien Hoa AFB in Vietnam…he was never so glad to get out of anyplace in his life.  When he returned to San Francisco, he was the only Air Force Soldier, the other soldiers on the plane were Marines and Army that had busses to pick them up.   Arch had to go through Customs and the Terminal.  Outside on the street he was confronted by college age protesters asking how many babies he killed. He told them when they got a little older they would understand.
When his speech was over he got a standing ovation. 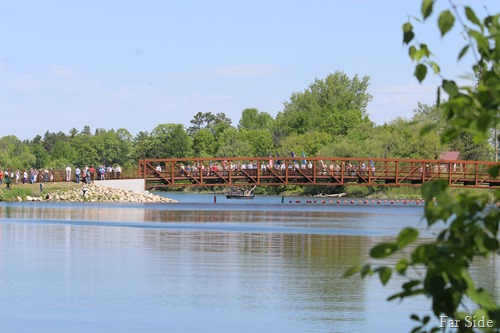 There was a ceremony at the Rusty Bridge Park(Red Bridge) and a wreath was thrown into the waters of the Fish Hook River.  I heard the gun salute and Taps being played but I never saw the splash of the wreath landing in the water.

Far Guy said “Years ago it was a large wreath and they threw it off the bridge on Hwy 34.”

Very touching and I appreciate you sharing the photos.

A fine story about a fine soldier and gentleman. And he was right: now we understand. Back during the Vietnam days, we didn't.

Sounds like he had some good lessons to share during his speech. I'm glad he was asked.

How I'd love to sit and chat with your Uncle Archie: I hope someone is recording his stories.

I love the idea of putting the wreath in the river. It must be a touching ceremony.

I just love and appreciate our military men, and women, so much. I would love to have been there and heard him speak. He is a very honorable looking man. You and Far Guy both have lots of family in the military to be proud of.

I wonder if those protesters ever understood?

Thank you to Uncle Archie and his service to our country.

some of these vets had a wide variety in the experience they had and were capable at all of it.

Uncle Archie has had a lot of experiences that he could share. I enjoyed reading about him. I trust they had the integrity to actually throw a wreath in the water and not just a dead weight of something. One never knows.

I wonder what all of those college aged kids are thinking TODAY about the way they treated our soldiers when they returned from Viet Nam. I hope they have changed their minds. Thank you Uncle Archie for your service to our great country. You still look outstanding in your uniform!!

I think it is important that service men and women who have seen warfare tell their stories, the young and the old. We all need to know what it was like and they need to be able to unburden themselves.

It sounds like a great speech for the occasion. I'm glad Uncle Archie got the standing ovation he deserved for his service.

I wish I could have been there. I bet it was a wonderful speech and you must be so proud!