The day began at the WWII Memorial. 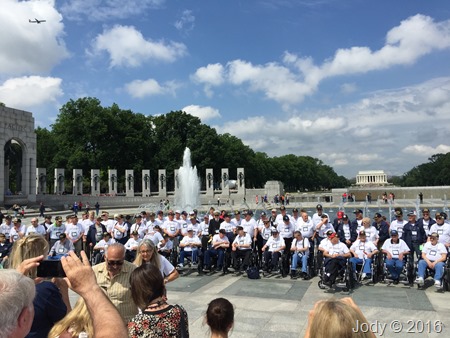 The WWII Memorial honors 16 million who served in WWII. 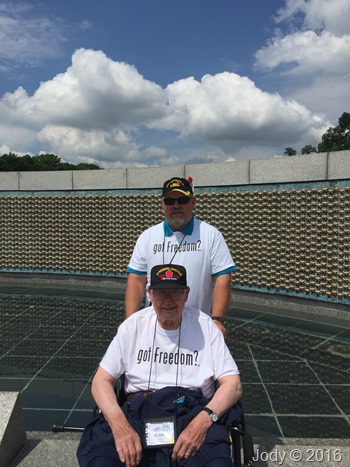 The Field of Stars.  There are 4,048 Gold Stars that pay tribute to more than 405,000 American lives. My Dad’s brother Arthur was one of those lives lost. 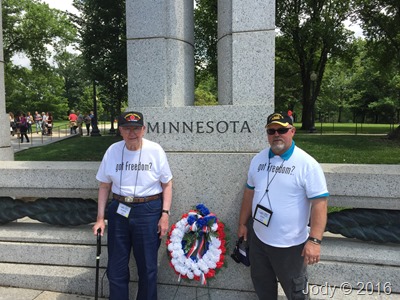 Here they are by the Minnesota Column. 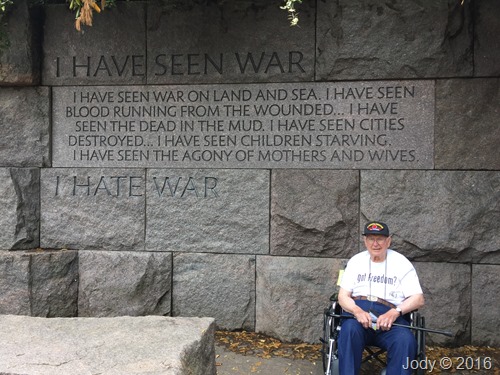 Dad at the FDR Memorial 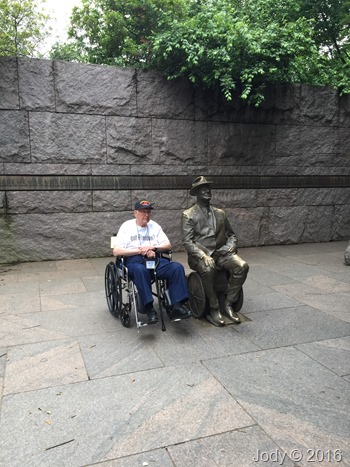 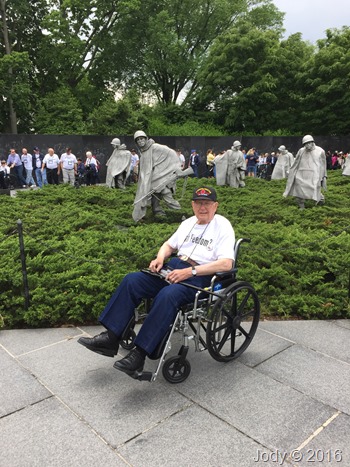 Dad at the Korean War Memorial.   Dad looked for the BAR man and wanted his photo taken.  Dad said “It was just like that on patrol.” 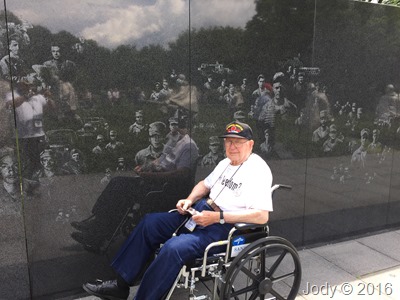 The Granite Wall has more than 2,500 images sand blasted into it’s surface. 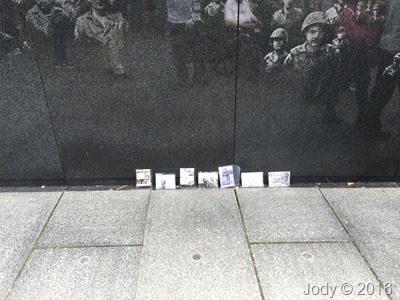 I asked my brother to leave photographs of my Dad in Korea,The Christmas Tree in Korea Christmas 1951, My Dad and I, my Uncle Arnold and Uncle Andrew who both served during the Korea War at the Korean Memorial.  My brother added a few photos of his own.  Jody said “As soon as I placed the photos, people started getting down on the ground to look at them and take photographs.”

Dad couldn’t get over all the people that thanked him, some with kisses and hugs.  He met some South Korean people who thanked him for saving their country.  He met school kids…he said “I must have shook 500 hands.” 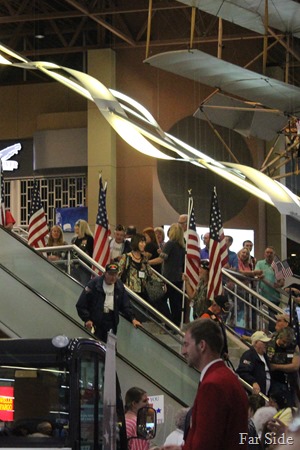 Dad coming down the escalator at the airport in Fargo. There were Honor Guards, Flag carriers and wavers of all ages and a Brass Band. 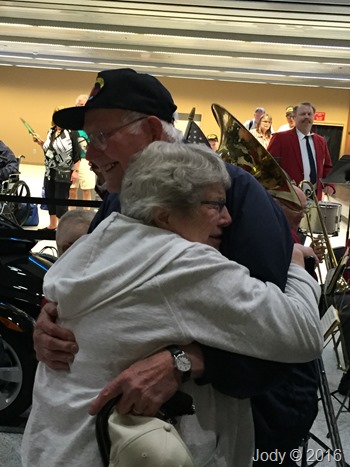 It was a good trip and a good welcome home!

So glad your dad got to see and do all this.

Thanks for sharing this with us. I love the photo of your mom and dad! What a nice welcome home.

What an experience! Thanks for sharing it.

I am so glad you dad was thanked for his service and that so many folks shook his hand and thanked him. He deserved all that! So sorry your dad lost his brother, And I love the last photo. Perfect story coming on Memorial Day.

I am so happy your Dad was able to go on this trip. Thank you for sharing his adventure with us.

Such a wonderful trip for your dad I can't imagine how he felt.

I think the Korean War Memorial is incredibly moving. It's wonderful that your dad finally had a brass band and his wife to welcome him home! I sure enjoyed this trip. :-)

The WWII and Roosevelt memorials were being constructed the last time I was in D.C. Seeing your photos makes me want to return.

I was thrilled to see that the sun came out on the second day of your dad's trip, and delighted to read that he received so many handshakes, hugs, and words of appreciation.

This brought tears to my eyes! How wonderful for your dad and all the veterans to be honored so. :)

This was all so interesting and heart warming and beautiful! I'm so happy for your Dad.

I found these posts absolutely fascinating! I wasn't aware of the detials or locations of the three big war memorials in Washington, though I've certainly known about the Vietnam Memorial (my era). And the Honour Flights sound like a wonderful program. Honours to your dad.

How wonderful it has been, reading your story about your Dad's honor flight. How fascinating. I'm so glad that he had a wonderful experience and met so many kind and grateful people. Thank you for sharing such a great story.

A very moving time for all. It's good that the younger people are involved so that the memories don't die with the service men and women.

I am crying. This is a great thing all you people have done for these and other veterans. Thank you.

I honor and thank your father and brother and all who have served. It is sad that sometimes appreciation is a long time coming.

Being raised by a Veteran was an amazing experience and something that stands always with me. Honor and Service...that was Dad all his life. He was proud to be American. He passed that legacy to us.

Thank you again for the service provided by so many in your family. I would proudly shake their hands, hug them and thank them.

These two post are wonderful! God Bless Them ALL

For those who experience war first hand, the memories can be difficult and linger over a long lifetime. These honor flights are a way to express our gratitude in such a positive way. The participants really do feel honored.

What an awesome journey...full of memories. Glad so many were there all the way to welcome and thank your dad and all the others on the trip.

The Korean wall is wonderful. I guess I have seen images of it on PBS but didn't realize the people are sand blasted on. I am glad that many people shook his hand. It makes me feel good about some of the American people we have. FDR was a president alive when he was alive. Brass bands and all make me proud and so glad your dad was able to go. I think his wife missed him though. Wonderful, just wonderful.

Thank you for sharing this. Very touching. You must be so proud of your Dad.

I didn't know about the Honor Flights...what a great program. You gave your dad a wonderful gift by getting him included, and I thank you for posting about it.