Well it was a long week.  Friday morning brought us partial success.  Some mucky muck finally said “enough.”  Far Guy was able to get his new ID card and according to the SS website he has Medicare coverage.  His health insurance has been reinstated and his prescriptions have been recovered from the cancelled file and some were supposedly shipped today.

Thursday night he asked me “How long should we wait to panic on prescriptions?”  He would have run out of medications completely on March 20.   I said “ March 6 then we will panic.”  He has not slept well all week…he doesn’t do stress well…it keeps him awake.  Me on the other hand …stress exhausts me and I have been so sleepy I can hardly stay awake until afternoon nap time.

We made the trip over to Fargo to get his Military ID Card updated…it had expired 20 days ago.  (You are supposed to have your old ID card, Drivers License and your Medicare Card to get the updated ID.) Since we were minus the Medicare Card everything was on hold…and still would be except for the mucky muck saying enough.)   Friday was the warmest day this week to travel it was 24F  or  -4C eh.

One of my readers has a fix on the Medicare Card. “Scribes could handwrite each card and letter for Medicare and bring it there by donkey in four weeks.”  We are awaiting the donkey, hoping he escapes ice storms and blizzards and no one captures him before he gets here.  He left on February 6 2015.

Once if when the card arrives and prescriptions are delivered and not cancelled we can put an end to this saga.  MAYBE…SS sent a letter saying they took two months of Medicare out of his February 18 check…guess what?  If you guessed that his amount remained the same and nothing was deducted you would be correct….unless of course the bank is in error.  Even when they send you a letter saying what they will do they don’t do it. 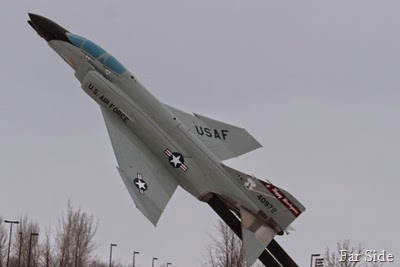 An F 4 D that blew out an engine because some yahoos wanted to go someplace in a blizzard…. ground crews walked the  aircraft to the runway for take off.  The engine blew and it ended up on this pole on display.