This is an old photo from years ago.  I found it among the hunting and fishing photos in my Father In Laws album.   I finished that scanning project and made a CD of the photos and packed it all away in the trunk.  One more project completed! All the photos were marked with who, when and where with a photo safe marking pencil. 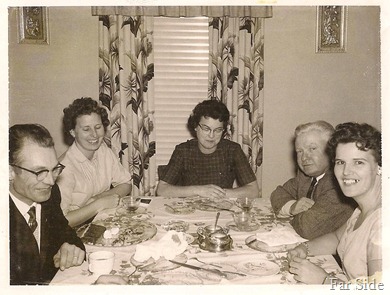 This was taken sometime in the early 1950’s.  That is Far Guys Mom at the end of the table.   The photo is taken from Far Guys Dads spot at the table.  So I can safely say he took the photo.  It was taken in the formal dining room at their home in Park Rapids Minnesota.

I think this photo has a spring feel to it, the ladies are in short sleeves, the linen tablecloth is the one with the green leaf pattern.   They have just finished a platter  of sweets of some sort and the silver creamer and sugar set is on the table. I bet it was taken on a Sunday afternoon.  Years ago Sunday afternoon was a time for relatives and visiting.

Uncle Willard is not in the best health.   Most of his children were here for Thanksgiving.  On Sunday afternoon they converged at our house along with other cousins from Detroit Lakes Minnesota..there was no linen table cloth..and no one showed up in a suit…but there was much laughter and lots of reminiscing and coffee and a plate of goodies. Alaska Guy and his brother from Washington DC were very impressed with this photo..it was one that they had never seen before.  I made them both copies. ( Lola and their Mother Louise are sisters.) It was a fun afternoon..almost like old times visiting with the relatives on a Sunday afternoon:)