I know that title sounds funny...but I needed a bit of time to digest Tuesday happenings.

We left at 4 AM to travel to the University of Minnesota for appointments with Far Guy's Lung Transplant Pulmonologist and for a Heart Catherization and Angiogram that the Transplant Surgeon requested. Far Guy had his last angiogram in June of 2019 that showed one vessel 55-60 % blocked and not bad enough to do anything about. The Transplant Surgeon wanted to see if anything had changed in the past 15 months.

Our early morning appointments went fine...Far Guy is feeling pretty good...being a hermit agrees with him as he hasn't been ill since January the Doctor thought that was fantastic.  They discussed what his feelings were toward a transplant...we had decided a long time ago that God was in charge.  The Doctor said she could understand and that after the heart procedures we might be encouraged one way or the other.  He would be taken off the list in February when he turns 71 anyway. 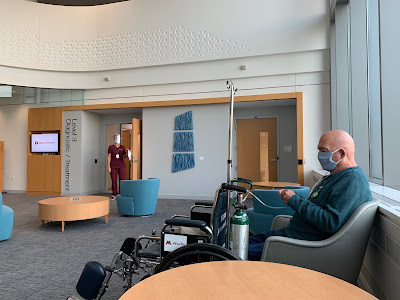 The heart cath and angiogram was supposed to begin at 1 PM and it was 2 PM before they took him away.  The nurses said the Doctor would be out in about an hour to talk to me.  Well that time came and went.  Eventually at the two hour mark a very nice young surgeon came to talk with me.  Far Guy was okay he said...the three main vessels that supply the heart...one has tiny areas like bumps, the middle vessel that was 55-60% blocked last time is still the same with no change...however the third vessel was 70 % blocked.  He said Far Guy was apprised of the situation and his Lung Transplant Doctors and Coordinator were brought in on the discussion.  Together they all came to the conclusion that a stent was in Far Guy's best health interests.

It was not a decision made lightly.  The medication you have to take daily to keep the stent open is one that is not allowed before, during or after a lung transplant.  So he is not on the lung transplant list anymore.

Far Guy is okay with the decision although he is pretty miserable with pain from the procedure.  He is taking it real easy.  One day at a time.

I have conflicted feelings...happy that he is okay and they have fixed the problem with his heart.  Sad that the journey toward new lungs has ended.  I will unpack the suitcases that have been packed for the last 15 months soon.

One day at a time.

We are both tired.  It was a very long day with four hours drives on each end of the day. 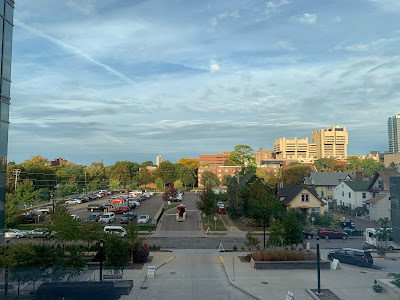 View from the clinic at the University of Minnesota