Wistful Wednesday: 1804 and another outlaw

Far Guy's GGGG Grandfather Daniel on his Mother's Paternal side of the family had that problem selling wheat that wasn't his.  Now it appears his son Aaron also had a brush with the law.. ...or Grandpa Daniel could have had a brother named Aaron...seems like it was a well liked name. 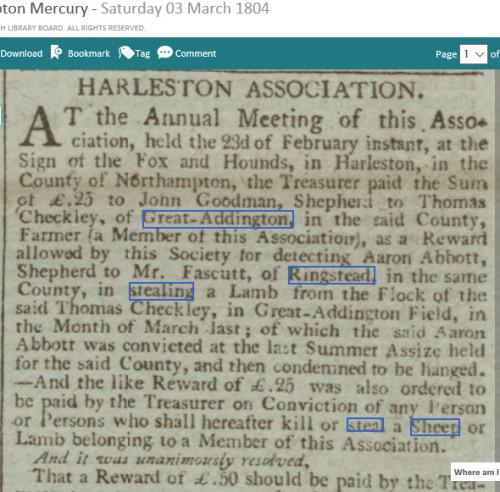 In the month of March last; of which the said Aaron Abbott convicted at the last Summer Assize held for the said County, and then condemned to be hanged.

At any rate our Aaron ended up in Canada so he was not hung....what happened?
GGG Grandfather Aaron would have been 22 in 1804.

In November 1822 Aaron, Martha and six children left Great Addington for Canada. In March of 1823 they disembark  from the ship Comet in New York.  They lived in Dundas Ontario for a time until they settled in Eramosa Ontario.

The six children on that ship named Comet were William 12, Thomas 9, Hannah 8, Elizabeth 6, Esther 4 and James 2.   The trip took 4 months.  Can you imagine?
Much more research should be done.

I know there is some questions about my Grandfather's Uncles who were shady characters, but not much in known as they disappeared after some bad 'doings' in the local town.
My Great Grandparents came from Denmark...well, one half of them did. That is about as much as I know! Heritage is tricky at best.

Our local paper has been digitalized on newspapers.com. It is too much fun. A local library has a subscription and when, I put in my great grandfather's name, the headline an arrest for bigamy! Actually it was his cousin with the same name. My mother's family had a horrible habit of all the sons naming one of their sons after the grandfather.

It seems excessive to be hanged for the theft of a sheep. But perhaps it was more of a crime back then, to take someone else's property like that. Interesting, though. You find the most amazing things, FS. :-)

Genealogy research is addictive, especially once you begin to find interesting tidbits like this one.

Whoa! I think there's more to this story - hanging seems excessive for taking a lamb.

Wow! I hope you find out more. Did he escape--did he talk his way out of being hung--did they change their minds on the verdict--did they pay them off--did the hangman die? Makes you wonder. Family histories are so fascinating!

My grandfather worked his way over from Sweden to Canada on a ship and became a lumberjack.
He didn't know he had left his girlfriend pregnant back in Sweden--who married someone else, of course, by the time he wrote to her. He later moved to Minnesota and married Grandma. My folks found out about all this while they were planning a trip to Europe for their 40th anniversary when the one relative in the US who knew the story told them because they wondered if my dad might be able to track down his half-sibling if any of the old relations in Sweden knew anything. (Not ever found.) Dad talked to Grandpa about it and Grandpa went into a complete state of panic! He'd never told Grandma about his sordid past and made my folks promise never to tell her because if she ever found out she'd leave him (they'd been married like 50 years). Truth is--she would have. No one ever told her...even after Grandpa died. She lived to be 104. I still wonder about the mysterious Swedish relatives. ;)

I enjoyed reading your story about your relative and all of the comments. Family history is fascinating. Who would have thought you could be hung for stealing a sheep? Look what happens these days with nary a slap on the wrist. Blessings, Betsy

Wow, he had a good reason to leave! It does sound like that punishment was a bit strong for the crime. I can not imagine having six children on a ship for four months!!!

I'm trying to imagine what the trip over must have been like. 4 months is a long time! I wonder if they were seasick....probably all of them at one time or another.

One wonders is there wasn't another Aaron, unless for some reason the sentence was commuted, it doesn't seem that he might have survived.

Having just completed a cruise on an luxury ship, I can't imagine travelling with six small children for four months. What our ancestors went through to allow us to live the lives is amazing. My great grandparents immigrated to Canada in the 1860's from Ireland.

I am always 'trying to imagine' things...sometimes I just don't see how our ancestors survived the trip to a new country/area, then to survive the weather. I read a lot of diaries and memoirs of early settlers. Just imagine traveling all day and cooking over a fire at the end of it. I don't even like to cook after driving a car half an hour to an appt. They traveled all day, in jolting wagon!

Oh how interesting, finding interesting facts about our families is always good

Scheduled to be hung for stealing a sheep??!! Lordy day! They took crime very seriously in those days, didn't they! Today it's hard to even get a murderer locked up! There should be a "happy medium" able to be attained somewhere along the line. This is sooo interesting. Thank you for posting! Love, Andrea xoxo

England didn't repeal the death penalty for theft until 1832, and sheep-stealing was definitely a hanging offense. So maybe he was able to get a pardon or something, who knows, but would be fun to find out.

What a wonderful find...although I'm still getting my head around a sentence of being hanged for steeling a sheep! Tough times.