My maternal Grandparents had an auction sale a long time ago. Grandpa was going to be 90 years old that July and was done farming.    I kept an auction bill and recently dusted off my huge scanner to scan it.

As I recall it was a reasonably nice day for an auction.  I bid on many things, mostly I bid against my Uncles so they wouldn’t get too much “stuff” cheap. 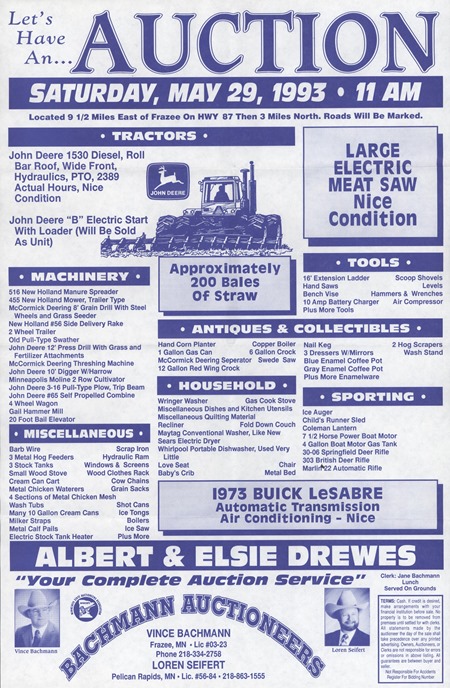 I am not sure what else I bought but I bought the copper boiler. 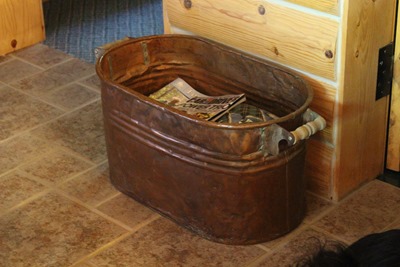 I suppose I should get some copper cleaner and spiff it up a bit.   It holds magazines and oversized rice bags (for cold feet), it sits inbetween the bedroom and the bathroom and yes Chance lays just outside the bathroom door…it is one of his safe places.

I have another boiler it is stainless steel and it holds extra blankets so the grands can grab one when they are here.  Not sure where or when I bought that one, maybe I bought both that day.  The boilers were always on the stove in the pump house, clothing was probably boiled in that pump house at one time, but all I recall is chickens being scalded in them during chicken butchering time.  ( For those of you who don’t know once a chicken has properly bled out, it is dunked into a hot water bath several times until the feathers are easy to pluck.)  I can still smell wet feathers just thinking of that old pump house.

I had to laugh at this Auction Bill…I thought my Grandparents drove a Buick.  It was a 1973 Buick LeSabre. (In Nice condition for a 20 year old car.  It always sat in the garage and never went over 45 or 50 mph.) Apparently no one was driving anymore…Grandpa never drove much Grandma always drove, but since they sold the car apparently she wasn’t driving either…Grandma would have been 82 that year.  Sadly they both died in 1995 within two months of each other. Grandpa was 92 and Grandma 84.

My grandma taught me to use a paste of lemon juice and salt to spiff up copper. I see that tip is on the internet in case you want to reas about it before considering it. Loved your auction bill.

I see your maternal grandmother had quilting material, maybe that's where your mom got her quilting skills. Interesting auction bill!

Now that is an auction I would have loved to visit. That copper boiler is really distinctive. I've never seen an auction bill before. :-)

I found the auction bill interesting, too. Once in a while I see one posted around here. Can't remember where...probably at Tractor Supply.

We had a wringer washer in the basement when I was a kid. I remember afterwards there being a forest of clothes hanging either outside in the summer or down in the basement in the winter. Automatic washers and dryers were amazing!

Interesting, glad you got a few things from them. I have nothing from either of my grandparents.

Oh this brought back the memory of smelling wet feathers at my granny's house! Yuck! Love the copper pot

I hated butchering chickens. We were little kids and had to pluck the feathers. It was fall and usually cold.

You made me chuckle, thinking about you bidding up the prices against your uncles ;-)

We have had a couple auctions in our family and it was sad to see their things go. Better than off to the dump though! We had my grandma's copper boiler next to our fireplace with logs for the fire in it. Those things have a lot of history of being useful and the copper is pretty, too.

When my grandmother died, and then later my grandfather, there was no estate sale, and two aunts breezed in and took a bunch of "stuff," without talking with my dad or the other sister, and some things we (the "grandkids") would have like to have had just "vanished". What I ended up with were two cactus plants that were already old in the 1960s when they were in grandpa's cactus garden and are still alive and thriving 50+ years later.

I just remember that awful, foul odour when the chickens were being plucked and cleaned!
I do wonder what happened to my mom's old boiler. Probably got thrown away, like a lot of 'old' things when no one imagined anyone wanting them.

I also remember the smell of scaled chickens. My job was to pick the pin feathers.

West side of straight said...

they say notto clean copper. love the way it is.
jo

A neighbor once gave me an old copper boiler and I polished it up and then he wanted it back! I gave it back and then later I got a metal one. I use mine to hold firewood next to the fireplace. Yours definitely has more meaning. I thought it was funny that auction bills down here always have auctioneers in cowboy hats just yours. I had my grandmother's watch but I've given it to my daughter. I only have one small picture of my grandparents. I think it must be wonderful in this day and age to still be surrounded by family and live in the same area where you grew up.