One last email, some thoughts and what Jennifer wrote back in 1997 about the flood.

Subject:  After the flood

Hello, We are officially after the flood now!!  We finally got our road back, no more BOAT, we are trying to get back to normal if there is such a thing.

I took some Finals, will have to do some (lots) of extra work in Botony.  I am back to work too, so it is catch up time for us.

We brought over Gene’s tractor from Mom and Dad’s yesterday, quite an adventure, but made it safely.

Savannah cut off her middle finger left hand …it was hanging by a thread, the Dr reattached it, sounds like it was most traumatic for the parents!  Savannah was at the neighbors stuck her finger into a small jagged hole in a stained glass window and then lost her balance and cut off her finger.  Trica was just beside herself.  Savannah is so curious about everything…so accidents happen.

Gene moved some sand bags bags today, we still have about 1,750 of them left.  Slow but sure!!

The water has receded so that the lake is back in it’s banks, the yard is really gooey and really dirty but it will get better.

West of us they are still boating, poor people.

I am back to working my two jobs, no one wanted to fire me so I gues I am giving it my best shot.  I have a really good chance to make the Dean’s List this semester, we will see how Botony goes.  Hope you are all fine!  Gene and Connie

I just missed the Dean’s List.  I got an A in Botony but messed up on the Plant Pathology final…oh well.  I worked at a small greenhouse in West Fargo for the spring and summer.  I also worked on Campus at NDSU taking care of all the plants in the public places and in the Dean’s Office (he was a real grump.)

That summer we knew we had to build up the soil on the lake side next to the house so we got some landscape bricks and made new flower beds.  We also cut apart the deck …it was a mess from the chain saw artist anyway…we made it a two level deck with a removable lower deck to lay sand bags closer to the house should it become necessary again. 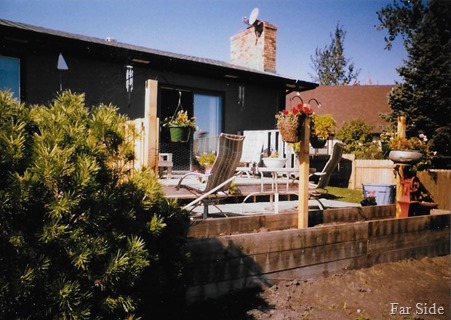 The deck in progress 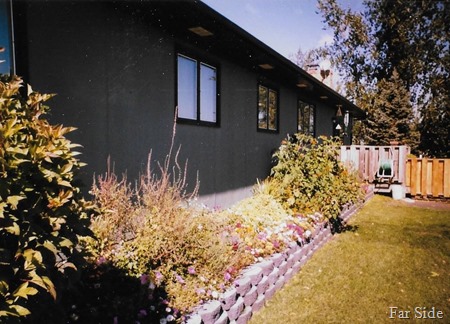 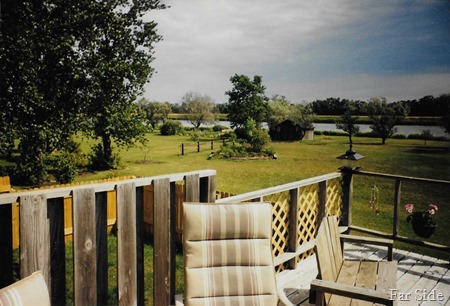 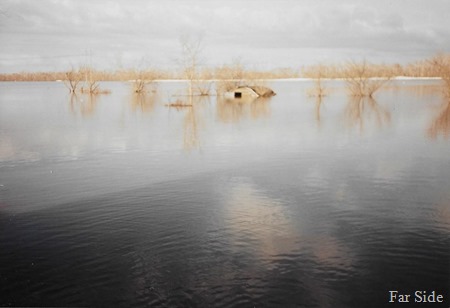 That much water is almost unbelievable…if I didn’t live it I would question it.

We sold the house in June of 1998 to a young couple she said she wanted the house because it had room for a dog…and she loved the Sheltie curtains that I had in the office/dogs room.  She liked it so much that they offered more money that what we listed it for and it was sold with ten days of being on the market.  We showed them photos of the flood…so they were aware.

They say it was a 500 year flood.  That area has flooded since we left…a couple of times.  Some of the neighbors built permanent dikes…others like us moved.

You can physically and mentally do more than you think especially if you have a good helpmate/teammate/husband/best friend.

Good neighbors are a blessing.

Floods are long drawn out affairs.  If you watch your dikes day and night you can plug the holes and save your home…with a little luck and by the grace of God.

Flood Insurance is a necessity.

Federal Disaster Aid helps some but many expenses were never covered. So floods are expensive.

The Red Cross gave us a bucket, a mop, a squeege and a gallon of water…not exactly my favorite recommended charity.  They dropped said items off across the water on the road where we parked our vehicles.

I would be a good sailor…because I get land sick versus sea sick.

I miss the water.  Far Guy not so much…he says he will never live on a lake again.

Since I am a saver of many things I saved what our youngest daughter Jennifer wrote about the flood.

What she wrote was tucked into a copy of her Thesis for her Master Of Fine Arts in Creative Writing. What she wrote became the inspiration for a poem in her April of 2000 Thesis called Water World.

From my apartment in Bemidji I watch the news telling of the possibility of flooding along The Red River Valley.  I wait and listen because my paents live North of Fargo and my sister lives in Grand Forks.  I want to know how I can help.

The phone conversations with my father are short, he tells me not to come because there is nothing I can do.  I am away at college and if I wanted to go home, I couldn’t because the water is rising and the roads are closing.

My parents are making preparations for their basement to fill with water.  Their strategy is to fill the basement with clean water to keep the contaminated river water from completely destroying the basement.  They have brought up the furniture and placed as many belongings as they can in plastic bags and Rubbermaid containers.  The dogs are visiting relatives, and my parents have left one vehicle on the ‘outside’ high ground.  The sandbags will be delivered on Thursday.

Each day the prediction of the crest rises, and people grow angry because there is nothing they can do but wait. We are all waiting for something: for he sand to be delivered, for the water level to fall, or a phone call from someone who tells us it is over and it is safe to return.

As if to test my family’s strength, on the day the sandbags arrived—snow fell and the water froze.  This is a mixed blessing.  It is too cold for the snow to melt and make the water level any higher.. and it is bitterly coldworking outside carrying sandbags against the straight west wind of North Dakota.

I try to imagine what it must look like having a lake off the back porch.  The pellets from the sandbags drip from the corners making a trail from the front of the yard to the back.  I imagine the expression on my father’s face as he fills, hefts, and passes the bags to my mother.  As the neighbors and his fellow guardsman help fight against the water, my father seemed to say something under his breath…something I might have said…something of confession…let it come.

When the weather stations declared the water levels at Harwood had crested, my mother called me to come and visit, to see what happened.

My father  waits for me, with a boat he will use to carry me to our island home.  He uses the same boat to go to work and into town to stand in line for drinking water.  On the way over he gives a commentary about the road beneath us and he hopes the bridge is still there.

I see a current of grass, branches and railroad ties float in my parents front yard around the house, then joining the ocean we now motor over.  He beaches the boat five feet from the house and pulls it up, not wanting me to get my feet wet.

My mother stands on the deck and documents the event of my first arrival since the flood.  She puts down the video camera and wipes her eyes.  Today is day seventeen of the flood and still counting.  I embrace my mother and tell her it is really not that bad, it could be worse.  She laughs.

Later this week, as the water recedes, my father will fertilize the neighbor’s lawn from bags that were once in the shed, now disolving into dirty water that smells of mud and dead Catfish. Underneath the deck, rats, mice and frogs hurry to find shelter from the rising water, still chasing them out of their homes in the yard.  The neighbor’s comment, the neighborhood looks like a war zone with minature fortresses of sandbags around every house.  Some sandbags are leaking and some are still holding the water from peoples homes and lives.  The wind carries sounds of generators.  The hum of gas powered water pumps echo across the water.  No dogs bark, no cars drive, no people leave their homes in fear of rising water levels….Jennifer

How awful that flood was for you. I don't know how you survived!

Jennifer described the eeriness so well.
Your ordeal reminds me of going through Hurricane Matthew last year. We never saw hide nor hair of the Red Cross which surprised me a lot.

Jennifer writes beautifully...I think she got if from her Mother and going to her classes at NDSU! I pinned your picture of your 'after the flood' landscaping next to the house. You used those stones which is exactly what I want to do here as my foundation shows and it would also keep the Bermuda grass out of the raised beds. Did you sink them into the ground and level and pour sand and all that? I also have stones that I do not want to have to dig up! Any tips would be appreciated. My email is slicher@centurytel.net but if you email me let me know as I don't check it very often.
Your Wednesday posts about this event have been extraordinary and except for the fact that you had to go through all that, they have been fascinating to read. I imagine this history you have written will be read generations from now like we read stories of the dust bowl years and other tragic events in American history. So glad you all survived it! The Savannah finger story was awful....I could feel her parents anguish in my stomach....how scary and awful. We had some events like that with 4 kids for sure and if it was present day I would probably be accused of child abuse but they were all truly accidents. You can't make that stuff up! So glad Savannah and your family survived that historic flood.

You both write so well. Apple and the tree and all that. ;)
I think it was an ingenious idea to fill the basement with clean water!
Definitely one of those lifetime events you look back on and wonder how you lived through it all. Survivors. You are true survivors.

Luckily it never came to that but it was close the one night when water came in a basement window well. We were lucky and able t keep the basement dry! :)

That was a good piece that Jennifer wrote. I'm glad you were able to stick it out and save your house. I can understand Far Guy not wanting to live on a lake again, but you'd just have to pick the right place with enough height above the water.

yes you have to level the area and then pack in sand to make a good base for the blocks. If you don't have a great level base the blocks will settle and look wonky :(

Susan from the Pacific Northwest said...

Thank you for sharing your flood story. Having a first person account, with all the photos and details, really brought home the difficulties and will help me have some clue as to what people are going through when I read about other disasters.

When it's over it almost seems like a let down. the pressure is off. I would never want to go through a flood. You went through the flood and still managed to get some things done.