Well we have two infusions behind us.  I told Far Guy I am going to take a photo every week.  So he is barely smiling/kinda frowning. 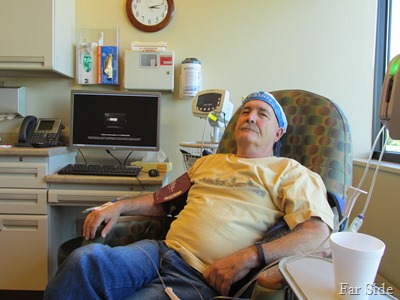 We were there only two hours this time.  He drank some grape juice.

I tell ya what…some dingbat sure thought out the procedure to mix “the stuff.”

The Infusion Nurses have highlighted the written important parts and we followed it step by step.  It has to be room temperature first so we call ahead to remind them to take it out of the fridge.  I thought I would just be observing but instead I mixed the solution right along with the nurse.  There are five vials of a powdery stuff and five vials of diluent, needles with sharps on both ends…the dilatant goes into the powdery stuff…then it is gently swirled until everything is dissolved.  Then it is sucked up into a very large syringe that has a special filter needle that traps any particulate that otherwise might cause a stroke. Then it is transferred to the IV bag…carefully..as with any needles…you don’t want to puncture anything else like the IV bag or your fingers. It took two of us 30 minutes to prepare “the stuff.” We could have used another pair of hands to hold the IV bag right side up while squirting “the stuff” in there.

It seems with any medical “stuff” there is lots happening in the background.  The Drug Company cannot understand why the infusions are being done in a Infusion Center.  They want a nurse to do them in our home…well that is not happening. (Too expensive and it is not covered by Medicare or our Insurance unless he is housebound.)  Then they want me to be trained…but they don’t know who will train me or when…they said “Ask the Infusion Nurses.” Really?  They should have the answers it is their “stuff” ( Plasma from many individuals…and it is made in Austria so I expect Far Guy will start yodeling any day now.)

We are not sure when he will be scheduled for the surgery that implants the port. 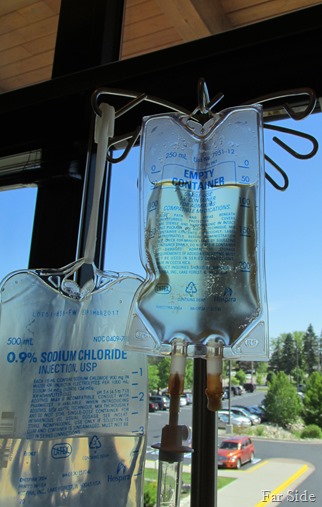 Far Guy is way beyond frustrated.  He is ready to throw in the towel.  I told him what the hay just jog over to the cemetery and lay on the plot.  I figure the skeeters would bring him to his senses.

It has been a miserable week. I have a massive abscess that was in my jaw/roots of a tooth that has had root canals and a crown.  The abscess moved to just under my ear. (Think pocket gopher.) At least it doesn’t hurt as much as it did and I can sleep. I am taking 20 days of antibiotics before I see the Oral Surgeon and have it yanked out…I am looking forward to that with great anticipation.  If it isn’t one thing it is another. At least it is a back tooth…and at my age it is not worth saving…if a root canal and a crown didn’t fix it then I am better off without it.