Well, when you have lots of old photos you begin to get a little curious.. who were these people? Why were they important? Why did Far Guys Mom keep numerous obituary clippings from their deaths in 1968? I do know that Far Guys Mom was very fond of Uncle Frank and Aunt Mae, they were a double Uncle and Aunt..you see Frank was Grandma Meadys oldest brother, and Mae was Grandpa Curts younger sister.

This is the folder that Franks Graduation photo is in. Note the dark grey circle "thingy"..it is hard..the only thing I can think of  that makes sense is a wax..that was intended to be stamped with a hot seal of some sort...perhaps my readers will venture a guess. 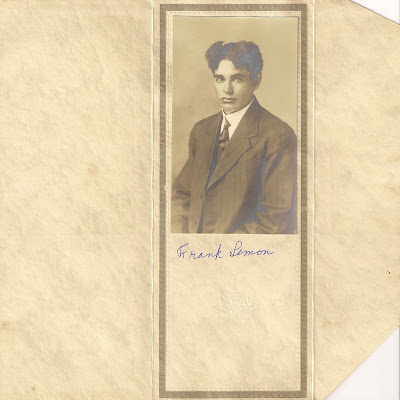 This is Frank..now we will have another guessing game..what do you suppose was Franks profession? Frank was born April 02, 1883 in Bassett, Iowa to Robert B and Martha Etta Michels Lemon. I am not sure when this family came to Carsonville Township, but they were here for the birth of their second child Amy in 1887. If he was 18 when he graduated from High School, then this photo was taken right about 1901.

This is Mae..Frank courted Mae, I am guessing that he walked or took a horse and buggy the mile and a half between their farms. Mae was born November 09, 1889 in Lake Eunice Township, Becker County to William and Martha Abbott, in 1896 they moved to Carsonville Township, Becker County, Minnesota. Would you like to guess what Mae did in her early life before she was married? This photo is probably from around 1907, she would have been eighteen that year.


Yes, Frank and Mae eventually get married, but they have no children..no one to tell their story, well except me..I have some photos and their Obits..other than that I know nothing other than Far Guys Mom loved them both very much. Next Week : Part Two of the Frank and Mae Story. :)


Later this evening I will come back and fill in the blanks.. Frank was a Barber !! Mae was a Teacher !!
Posted by Far Side of Fifty at 11:11 AM

Frank was involved with the local newspaper and Mae was a school teacher. ?????

Thanks so much for checkin' in on me. I really pushed myself hard for our Fourth of July bash with a guest list of 49. Whew! Up to that point I was still developing stray onsies here and yonder. Monday Hubby counted eleven new shingle blisters on my back. I just had to laugh when he said they formed the perfect big dipper. Hummmm, would that make me a star??? He has ordered me to do nothing more strenuous than takin' a dip in the pool until I heal up. Ya'll know I don't sit still well!!! I AM goin' to take it easy, this has been goin' on over two months and it's gettin' real old. Kinda like me.....:o)

God bless ya and thanks so much for your prayers. Have a great day my friend!

I'll bet he worked with his hands somehow and she was a teacher, because she sure looks like one! And I love the pictures, they make them come alive again!

I guessed that Mae was a teacher (and Frank was a scientist). His hair is wild!

Love your new header with the cute doggies.

You got me with both, I wasn't sure about Frank at all. Thought it might be something artistic - and in a way I suppose I was right. Nice post.

Isn't exploring family history fun? I especially love the old photos - everyone was so serious - no smiles!

I always like your walks back into history. It's interesting to see the old photos and think back to the way things were. Thanks!