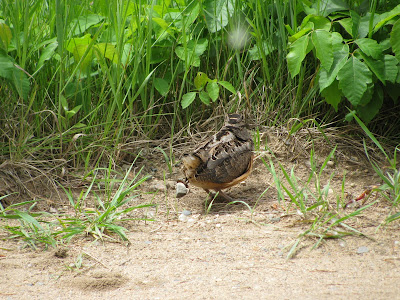 Recently Far Guy and I were driving along a back road, and saw a movement.  It was a strange looking bird.  It had a really long beak.  Neither of us had ever seen one like it before. 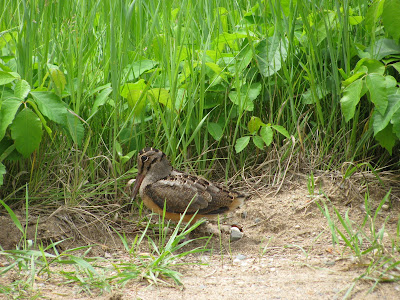 We couldn't figure out if it was an adult or a baby. We believe it is an adult after consulting Petersons Field Guide.  I took all the photos out of Far Guys open window..I was afraid I would spook the bird and he would run off if I got out of the car. 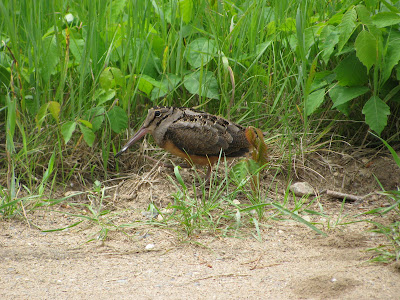 It is an American Woodcock, he is a wader.  We are on his most western range here in Minnesota, he is usually found east of here. In the background of these photos is a good crop of PI         ( Poison Ivy).

She who sees robins first has a Indigo Bunting at her feeders on a regular basis.  Al and Erna have a set of nesting Cardinals.  We just have Chickadees and Robins..the robins nest had another successful hatch.  This time Far Guy wanted to clean up under her nesting platform (a ladder) ..he reports that he took the ladder down and sat it on it's side..and that robins must be good nest builders because the nest clung to the top of the  ladder..so after the clean up he put the ladder with the intact nest back in place ready for the third batch of eggs.  We must be a robin nesting area.  The Bluebirds have successfully raised two batches of babies..since they took up residence behind the sauna in a Bluebird nest box.  I do not see them as much as last year.

My other baby brother and Hunter report that a wolf was sighted less than a mile from here.  Chance refused to go outside by himself one day..he was clingy and wanted company outside all day long..now all that makes sense, he obviously could smell the wolf.  We have baby turkeys in the woods, I suppose they are easy pickings for a wolf.  Chance barks at them occasionally.  We also have a set of twin fawns..supposedly they play in the driveway in the early mornings...I suppose they would make a fine wolf dinner too:)
Posted by Far Side of Fifty at 10:51 AM

That is a cool looking bird. What a great find! I'll bet it isn't often that you and Far Guy run across something you have never seen before! The photo's are good too, the details show up perfect when enlarged. I would have stayed in the truck too :)

Have a great 4th!

Our greatest wild life story is the coon that lives in the hollow of my old tree. I thought she had been killed by a car as I saw one a block away dead, but she was up cleaning cat food out of a bowl the other night. We will have to see how many babies she has this year. I have seen woodcock's at zoos where they have natural birds in cages, but I have never seen one in the wild.
Wolves are ok as long as they stay away from your house.

Wow, wolves! I don't blame Chance one bit. And that is one strange looking bird, I've never seen one before, I don't think they are in this part of the country.

Oh, and I meant to say what a GREAT 4th of July banner you have, with Chance ready for anything!!!

I only saw the beautiful Indigo when we lived in East Texas.
HAPPY 4TH

That is an unusual, but sweet, looking bird!

So much wildlife, what a cool bird.

And all I get? A raccoon in the kitchen...

Now that would be a siting to really enjoy.

beautiful bird. wow.
we only have house sparrow nesting on our patio. Would much rather have robins, finches, bluebirds....etc