Chance: I Got Mail! 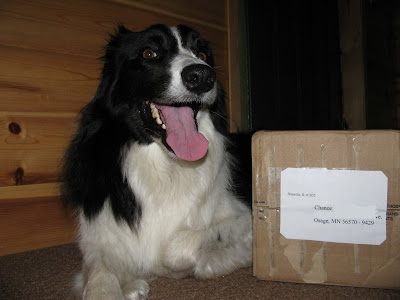 I have an admirer, Far Side says I actually have a bunch of admirers..how lucky can one Border Collie be anyway?  I have a admirer  named "Sarah" who would love it if I came to live with her.  Far Side and Far Guy are just not willing to part with me, the other day when I rolled in some fresh deer poop and turned partially green might have been a good time to go visit.  I bet Sarah wouldn't mind a bit.  It is nice to know I have some Minnesota friends! 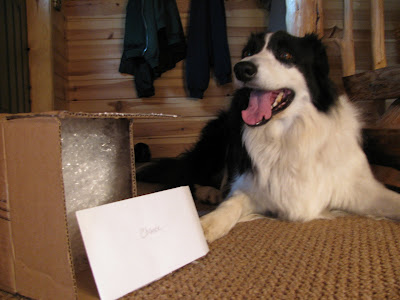 I got mail, from Danville, IL.  from Rae. Far Side says that Rae is a special lady whose best four legged friend, Piper went to the rainbow bridge last month.  It was a very, very sad time for Rae..but she is feeling a bit better now and went shopping for ME!    Rae sent me a package,  she said " A dog can never have enough balls! " 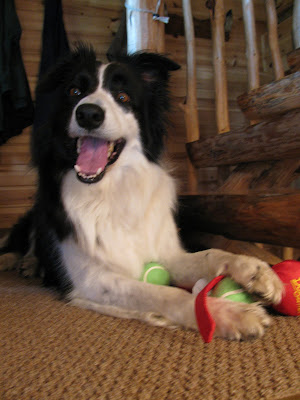 Thanks Rae!
I am living proof that there can be happiness after a great loss.  You see I followed the mourning that went on around here for three long lonely years after "Captain" died.  Far Side felt like her heart had been ripped out and stomped on..she feels a whole lot better now...because of me.  She will always have a special place in her heart for all her friends at the rainbow bridge, and someday I will have to go and leave her and Far Guy alone..they knew when they picked me out ( when I picked out Far Guy) that they would probably live much longer than me. 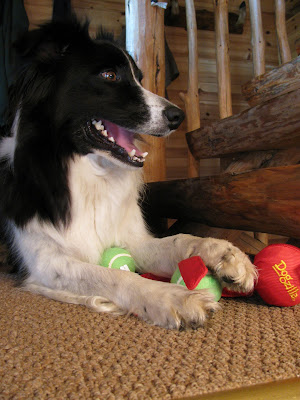 Today, they will throw my ball and I will run and chase it with wild abandon and then plop into my pool and run over to them and shake water droplets all over them..and they will smile.  No one is guaranteed a tomorow, not a dog, and not a human either:)
Posted by Far Side of Fifty at 9:53 AM

Chance, I am so happy that you liked your new balls. I hope you enjoy playing with them. You are a very special dog indeed and you inspire me to open my heart again to one similar to you. It was hard losing my best friend last month, but seeing you makes me want another dog badly. I am on the path to locating a dog like your best friend Minie. Hopefully I will have a new friend living with me soon.

Sad for Rae. It is never easy to say goodbye to such a special friend. Chance is a sweetie and so glad he got new balls.

Chance sure looks happy and I bet Rae is to.
Patsy

I had not heard of Rae's loss. We have a friend in Texas that has to make a decision soon with her Border Collie. It just breaks everyone's heart. I like the mulitcolored balls. We should send you Barnies as a rescued dog just thinks he should eat them. Any thing flying his way is a very big threat. Hey Chance, you got great mail. It looks like you just had a bath from you now what.

Congratulations Chance! Looks like Rae sent you an abundance of brightly colored balls. So true, no one is guaranteed tomorrow so we must live today to the max. Have fun Chance and may you be blessed with many kibbles!

Be sure and tell Miss Connie hello for me :o)

Sorry about Rae's loss. We do love our pets sooo much. I hate to think of the day I will lose Karma. What a great gift! Chance looks delighted after he discovered what was in the box--hehe! ;)

Great photos of Chance. And how great that you got sent masses of balls. I bet you bring the Fars lot of happiness.

Chance, I have often thought of writing you a fan letter...now someone beat me to it and sent a gift besides. I am glad you are so admired and loved.
Please tell your folks, (Far Side and spouse) that Lo is grateful as hell for the honor of being displayed on her blog.)

Chance, you are an amazing doggie! Of COURSE you have fan mail, you are pretty darn special, and lots of us know it. Rae is a special friend to you, sending you some new balls! Pet, pet, pet. It's hard to pet through the Internet, but I'm trying.

I always love when they let you do a blog, Chance - - - and who better to feature but our friend, Rae. You are helping heal her heart. What a great dog you are - - - bringing happiness to so many of us. We are thankful that Far Side and Far Guy like to share you with the world.

I love the big smile on Chance's face!!

got tears in my eyes, I come away from photos laughing and then come over here and cry.
I really fell apart and grieved when my dedicated friend old Karl went to rainbow bridge. It's been six years. I haven't gotten over it - and my husband is not inclined to get another dog. So there it is.

ps. you can click on "old Karl" in my comment. Should take you to a photo of him

Chance, you are very wise for your years!!!!
Blessings for a long happy life

Rae is a jewel. This truly shows how big her heart is to think of Chance during her time of loss.

There are some really great people in this blog kingdom!

How lucky you are Chance!

I love his smile! In all the photos a huge smile, but FOR SURE A BIG SMILE with the balls!

great photo's. Chance is a winner for sure!

I've learned that the best way to help your self is to help others.

Sheesh, Chance, you're my new favorite preacher! Hope you're not planning on goin' out on the circuit.

Hi Chance,
You look totally awesome in those pictures! It's so neat that you got toys in the mail. The look on your face is priceless :)