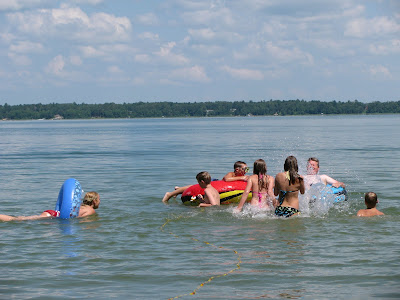 We had a great day out on Cass Lake with our daughters and their families yesterday. It was a beautiful day, one of those perfect to be on the lake days..one of those days you dream about in the winter. Chance was an only dog yesterday..I took him out on the lead..he can swim..he prefers not to be out of his comfort zone..but he can dog paddle. Border Collies are not relaxed swimmers like retrievers..but he did great! 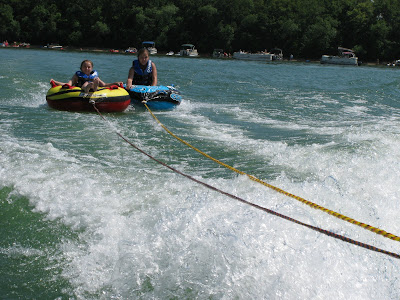 Far Guy did a nose drive out the side door of the pontoon and I fell out of a perfectly good beach chair..landing in the water but still holding my camera in the air. Our daughters are amazed that we can be left alone during the week.


It was a fun day!  Water and some sun will tire you out. About a half a mile from home, we both watched a little animal come out of the ditch and begin running down the road as fast as his little legs would carry him.  We both said "It is a puppy."  Far Guy stopped at the side of the road. I hopped out and began to chase down this puppy, he was running in circles, he had a collar on..but he was a pretty fast runner. Cars are coming from both directions..well it was a good thing that people slowed down..I guess if I saw a wild looking woman wearing a red shirt standing in the middle of a State Highway waving her arms..I might slow down too. The "puppy" hid under our car. When he came out he ran circles in the road..he finally got curious enough about me to come too close and I grabbed his collar.. now is the time I could be bitten..but I was fearless..I lifted him up into my arms and got into the car. 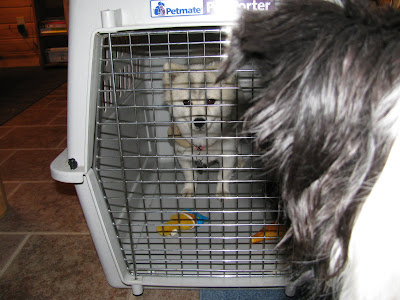 "Dude, have you been in the slammer long?"
Chance's new outdoor kennel worked wonderfully for the evening, I made some phones calls, Steve and Jo came to look at him...there is a 500 dollar reward for a lost dog in our area.  Chance and I have been on the lookout for that dog.  Steve and Jo both said "Nope, you don't have the 500 dollar dog."  Bummer, but who ever he belongs to must be worried sick.  Far Guy didn't think that I should bring him into the house..because he might have fleas..well I checked and didn't see any sign of fleas. He was hungry and helped himself to food in Chance's dish. When he accidentally "watered" the log post in the dining area..he was put into Chance's kennel indoors for the night. He is a friendly little thing, maybe part Spitz and part Pomeranian. He does have a rabies tag and I am waiting for the Vets Office to open so I can find out who he belongs to. He was a gentleman all night long, and slept quietly. I am guessing he is about four years old and belongs to a little old lady because he has a pink collar..and that his name starts with a "B" maybe Buttercup ( my guess) ..or Buddy (Steve's guess) ..I will update here later with the results:) 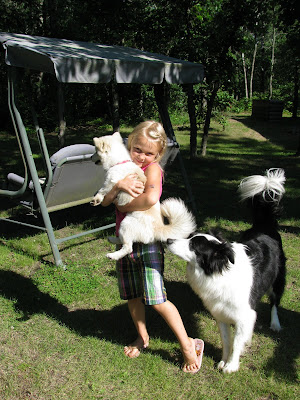 Update 10:15 AM : Pee Wee's person was located, she lives with her family about a mile away.  She was very happy, Pee Wee had quite an adventure:)
Posted by Far Side of Fifty at 9:01 AM

Aw my reaction... giggle giggle snort, Buttercup for sure, pink collar and all. Definitely not Butch.

I think it is the presence of adult children that make us suddenly forgetful and clumsy, just subconsciously preparing them for the inevitable doncha think?!

So glad that you found her and also found her home. It's so scary when you lose a loved pet and so wonderful to have a marvelous person like you rescue it and get it back home safely.

A perfect day on the lake plus a dog-saving adventure...great way to spend a summer day!

Well, I'm glad PeeWee's owner claimed him. Name must be a give away for accidents in the house?!?!

Hurry for Pee Wee's safe return. He sure got himself dazed and confused.
When my wife and I drove away from our kids in the park in Maine to go to the airport, I sensed that they thought the old fools would be lost in an hour. They were surprised we could actually function even though it doesn't always seem so. I laughed hard about you two and your accidents. Your kids can just wait, they can take their turn falling off the boat soon enough.

Well that was a truly good deed. And any dog lover would appreciate knowing that a family pet had been reunited with the owner. Funny that the lady who he belongs to was so far from your little old lady. Not that she won't be one some day! (And before she knows it.)

What a sweetheart you are to have helped reunite that dog w/ its owner! Also glad when you fell in the water your camera didn't get ruined! The hubby dropped my last camera in the water last year when we were out on a boat.

Now that smile is worth far more than $500.00. You just cracked me up when you said your daughters were amazed ya'll could be left alone during the week. Oh, if my kids could just see what we do when their not around! Hehehehehe!!

You have a most blessed Monday my friend!!! :o)

You guy's are the best people.
Patsy

Thank you, so many would not have stopped.

You definitely had a day full of adventure. Chance seems to be a good sport about sharing his abode. I am so thankful you stopped because Pee Wee might have ended up being a pancake if you had not.

Ohh great story ending! That little pup looks familiar but I can't place it! Thanks Connie and Gene for caring--- your day at lake was interesting - the camera didn't get wet --AMAZING! Far Guy I would like to have seen that nose dive!

Oh, I had a giggle today. Glad Far Guy knew to hold up your camera so it didn't get ruined!

And so glad Pee Wee got home... although I do love the name Buttercup!

glad that the pupy and his family was reunited. good rescue.

We just love our yearly vacation on the lake with our pontoon. I am missing it already! You sound like you had a great time!

I used to love going to the lake as a kid...now I'd probably need a keeper. We've had two border collies now that loved the water and swam more like retriever's than collies....maybe they had some relatives back there.....

You are a hero saving that little's dog's life. Way to go!!
Your day on the lake sounds wonderful. I can't believe you managed to keep your camera dry after your dip. You must have excellent reflexes or exceptional good luck.

See, you can be left alone all week. Giggle.

Good thing that you did stop and rescue the dog, you probably saved it's life.

Good Job! So many people would and probably did just drive by that little dog!

Giggled about the misadventures that caused the kids to worry abut you guys--but glad your camera was okay. So glad you found out who the dog belonged to--and again--giggled out loud--PeeWee!!?? Both because of PeeWee's Big Adventure and the peeing on the log--hehe! You guys were PeeWee's guardian angels! :):)