The Frank and Mae saga continues..

This is Mae when she graduated from Normal Teachers Training.  She taught in several schools in the Becker and Hubbard County area before she married Frank. Photographers back then knew how to present a photograph! 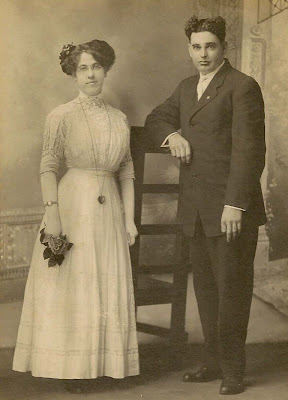 Frank and Mae were married on June 29, 1911.  Shortly after they were married they moved to Nehawka, Nebraska.  Frank was a barber in that city for over fifty years.  I am not sure if Mae taught school there or not.  They never had any children.

I believe that they moved to Nebraska to be closer to Elizabeth her older sister, when Elizabeth moved to California.. Mae and Frank just stayed there in Nebraska. 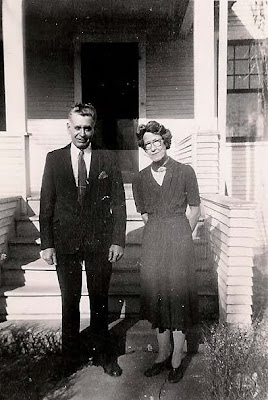 Mae and Frank 1943.  Far Guys parents probably visited them quite often when they lived in Omaha during the war. 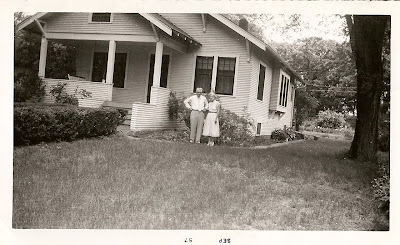 Frank and Mae outside of their home in Nehawka, Nebraska in 1957. 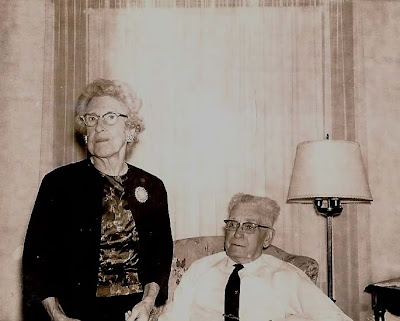 Mae and Frank in an unknown year.  Sadly or perhaps not so sadly they both died in the same year.  Frank was first to depart on February 26, 1968 after what is noted as failing health for the past year.  He was 82 years old.  Mae died on December 12, 1968 suddenly after a short illness, she was 79 years old.  I remember Far Guys parents going to Nebraska..they brought back some "things" and had a garage sale in Detroit Lakes in Grandma ( Franks sister) and Grandpas ( Maes brother) Abbotts yard.  I should have paid more attention.

I thought that more people would guess that Frank was a barber, although it would have been my last guess too...he had some wild looking styled hair in the early photographs:)
Posted by Far Side of Fifty at 9:48 AM

When I saw his hair in the first photo of them I thought, considering Frank's hair the young men who do the Quipee Doll-do these days really isn't all that bad I guess. But check it out the last photo of Frank and Mae and he has gone back to the style of his youth! A little less volume but the design is the same eh?

I noticed also that the first pic and the last pic have similar hair styles for Frank...It's nice that they left this world around the same time...they didn't have to miss each other for very long...

I'm glad they got to leave close to one another. It's so hard for the one left behind.

By the way I love your header!

So often long-married couples leave one right after the other. I think they miss each other too much. ;) That's a wonderful thing to love that long and well.

I, also, chuckled when I saw the hairdo on Frank's early photo. And it does look similar on the last one. Charming!

I always wondered how women wore those long,long,long necklaces (often I think they were watches) without cracking them against or catching them on a table? Something to ponder. That photo is just precious. :)

Thanks for the love story.What would they think about today?
Patsy

I must admit I laughed when I saw the hair styles in the first picture. They almost match!

Great shots - and I especially love the hair!

his hair still looked quite lush in the last photo!

I grew up in Nehawka in the 1950s and they were our neighbors. I delivered their newspaper and Frank cut my hair for over a decade. Fifty cents in his shop in the auditorium. Great people and great memories.

How wonderful! Thanks for sharing that memory!