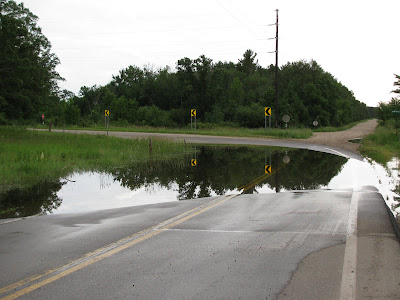 The water from the heavy rains is finally receding. This is the Breitbach corner..I have known it as the Breitbach corner ever since I can remember. Their Granddaughter lives there now..it will probably never be called by her husbands name. If it was called by a new name ..no one would know what or where in the world you were talking about. Old people like me, find change difficult and confusing. 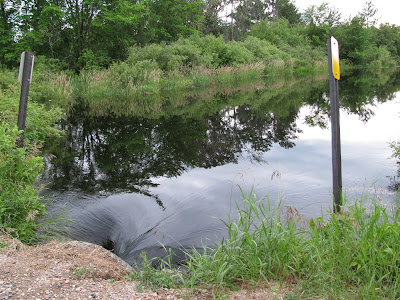 The river is way up...the culvert was running almost full. 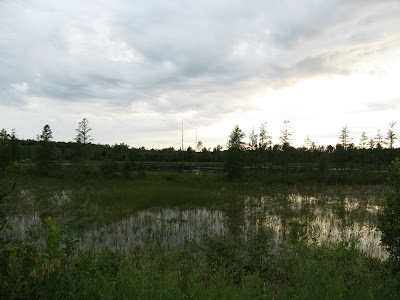 We drove down by Guyles Lake..now this is the Guyles Lake I remember from my youth..one with water near the edge of the road. There are a pair of nesting swans way on the far side, just like last year. 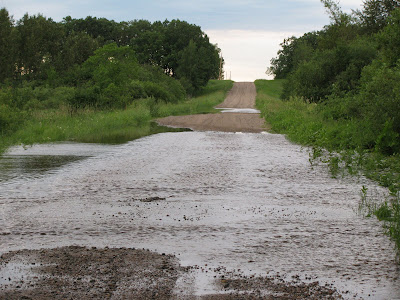 Shell River at the Dead Beaver Area ( I just named it that..ah the power of blogging!) was running across the road in two places..Far Guy wanted to drive through..I asked him please to turn around and return the way we came. The long way around..if we had gone through we would just be a mile from home..going around is about eight miles.. He sighed and turned around. Better that than having me scream " We are all gonna die." 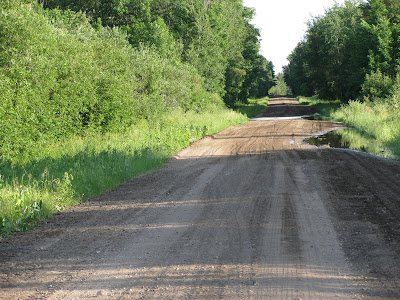 Last night Chance and I went to check on the water at the Dead Beaver Area and it was still over the road..so I turned around..I have been next to that culvert and seen the erosion..old lady and her dog float down the river in their red car..well that isn't going to be me making the headlines this week. 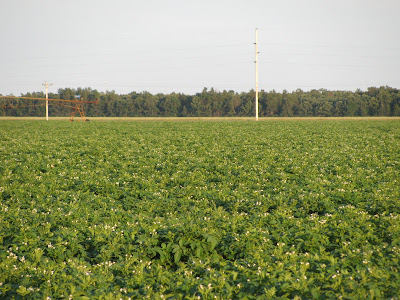 The irrigators are silent after the heavy rain..usually they go night and day..day and night..watering the roads as they make their circle around the fields. It irritates me when they waste the water on the road especially if I have my window down while going through a wet area, perhaps I should take photos of their inability to control their irrigators and document the time and dates and mail them to the headquarters of the large corporate farmer..no doubt the photos and letter would be trashed..this is a potato field..it is in bloom.

Last night the silence on the prairie was almost deafening..well until we turned up our music ..Chance and I are fond of the Bee Gees:)
Posted by Far Side of Fifty at 12:07 PM

I love your new header photo - so sweet.

I love your new header! If I didn't know better I would say that Chance and Miney look like the proud parents of Little Elvis :)
Glad the rain has stopped - and SO glad you and Chance didn't make the headlines!

Ah the power of blogging....we've a road here with a big hole that I named the maggot hole so the trail is now known as the maggot hole road. Love the new header....you should hire out your services;)

Love your new header!!! What amazing water/rain! We are dry...we could use some. But not for a couple of weeks (see how werid I am) we have hay down, once it is baled and hauled then I could stand RAIN.

They have cut our water back again....ugh.

Oh dear me, it is a good thing that we are sittin' at 88 today and only cloudless skies on the horizon for the rest of the week other wise the sight of all that rain water could cause me to begin weeping all over again.

By the way, I truly love Little Elvis' face.

You just reminded me of a truck crossing high water tale. I hope you don't mind me referring to your turn around.

Isn't it crazy how you have an overabundance of rain and we are almost in drought conditions. People were complaining this spring when it rained heavily every day. Amazing that they can't remember we need it before summer.
I, too, am glad you all aren't sad headline news!

All I can say is, you have the most photogenic dogs on the planet. I thought I would miss seeing Chance dealing with the fireworks, but this is just wonderful. We are also seeing a lot of sun, no rain in the forecast, and the flip side of cool.

Wow, you really DID get some rain and flooding there, didn't you? We had humid heat and then days and days of rain too...but thankfully, no flooding here. Love your new header of the three dogs..they sure are cute!

Oh my Little Elvis is getting quite big -- how good lookin' they all are - nice header! Wow the potatoes started bloomin just this week! -- Country Silence - you know I am jealous!

Lovely post - full of interest. You can imagine someone blogging in 50 years time writing "does anyone know why they call it the Dead Beaver Area?

My goodness, lots of water, looks like around here in the swamp area after the heavy rains, we have had our roads wash out, but praise God any how, hugs my friend, stay safe, and good thinking on going around instead of through.
Blessings, Barbara

The crops just love a nice tall drink of Mother Nature's nectar. Well water does nothin' in comparison. While northern Missouri has dealt with flooding, southern Missouri has been quite arid. Yesterday we were blessed with nine tenths of an inch. The cornfields are praisin' the heavens this morn'. The crop was really starting to look stressed. Now they can grow nice juicy ears and sing along..."ooo...oooo...oooo...oooo...stayin' alive...stayin' alive! Gotta love those Bee Gees :o)

God bless ya and have yourself an excellent weekend sweetie!

Wow - that IS a lot of rain. We're having a dry spell with a tropical heatwave!

It really has been raining there!! It has rained some here but not much. Last night we had a major thunder storm but only go a few sprinkles.

I love your new header!!!
How did you get it to go all the way across??

Our weather guys keep preaching "Turn around and don't drown." We have areas around here that do that and cars do going right into the clink with out any problem. We have had a few days of no rain now which means catching up on the mowing.