Yesterday we took Adam to meet up with his parents and his brother.  We kidnapped the grand-girls on the way and took off to Cass Lake.   Cass Lake has a number of islands.   One of them is called Star Island.  Inside the confines of Star Island is a spring fed lake called Lake Windigo.  Windigo is an Objbwe mythical creature with burning feet that could posses people and inspire cannibalism, Far Guy used to tell the girls this story around the campfire late at night when we were camping..it used to be accompanied with much squealing and them moving closer to me for safety.  Anyway Lake Windego is the ONLY lake in the Northern Hemisphere that is a spring fed lake enclosed by an island that is totally surrounded by a river fed lake.  Kinda cool. Should it ever be one of those trivia questions for a million dollars..remember where you heard it! 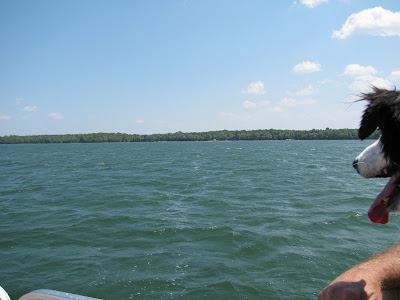 Chance is pointing the way to Star Island.
We went ashore and had sandwiches for lunch and walked down to a pathway that went over to Lake Windego. 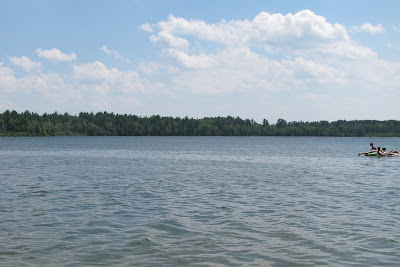 Lake Windego, Noah and Paige are teeny tiny specks in the distance. 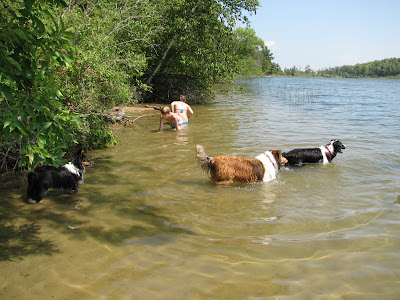 The kids and the dogs played there for quite some time, it is a very shallow lake..you can walk all the way across some parts of it.  Noah and Paige gave it a good try.  They were way too far away for my liking..finally Andy went out with them.  When they finally returned I was greatly relieved.  Jen kept saying "Mother they are fine, for goodness sakes they can stand up."  Well I guess they could ..but it didn't seem like it could be possible to me.  The shoreline is very abrupt on this lake, it goes from lake to a poision ivy filled shoreline  just like that..people were stacked up on chairs in the walkway.  Some people had their chairs sitting in the lake.

On the way back I stopped to take some photos in the walkway between the two lakes. 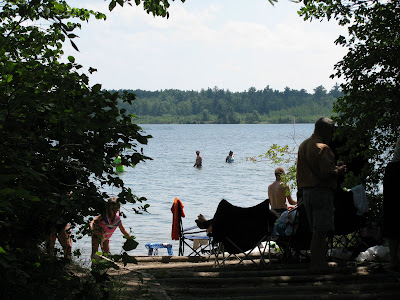 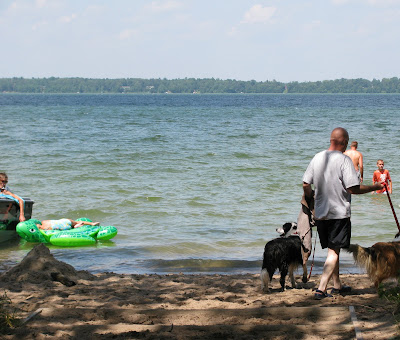 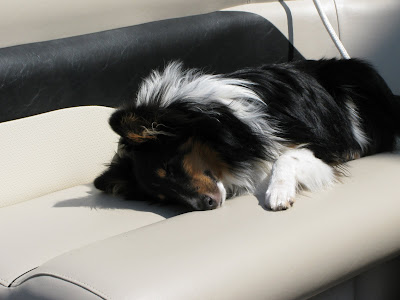 The kids went fishing..and Little Elvis had a nap.  It was a beautiful day to spend on the lake, it could have been less windy for Far Guy.  His short sleeved hooded sweatshirt was a blessing. It helped to keep the wind off of his face.   I took tons of photos.. the kids had a blast:)
Posted by Far Side of Fifty at 12:02 PM

That sounds like a family memory the kids are going to cherish forever.

We had times like that when we were kids, fun days at the lake, family. Funny how your story brings it back to me so vividly. I don't think that I appreciated it enough then.

Walking across the lake would be total fun.

It looks like the dogs had a great time, too. Chance is one fortunate animal. He gets to have lots and lots of adventures. Most dogs just stay in a backyard most of their lives.
That IS very interesting about the spring-fed lake inside the island that is inside the river-fed lake. Don't you love all the things we learn from each other?

The Windego is real!

I love seeing such a scenic place. Sounds like an absolutely delightful time with family and pets.

I knew about Windego, but not about Star Island and Lake Windego. That's a great piece of trivia; thanks! And it looks like a wonderful day for all.

Wow, it looks like everybody had fun, got tuckered out, and we got a lot of pictures and a great story (we blogging friends, that is). I think I'm in love with Chance.

It sounds like a great place to spend the day. The photos are wonderful. Really looks like everyone had a good time. Little Elvis sure looks sweet there taking a nap. What I wouldn't give to have one just like him on my lap:)

Love the look of the place, I could stay all day.

Oh that looks like a lovely place for a fun day of swimming, nice lake, we do not have many lakes in our area, mostly rivers, and you would not catch me swimming in my rivers, they are full of gators, chomp, chomp chewy if you know what I mean, giggles, yah but lakes that is nice.

Elvis is such a sweet puppy. I could see he would get tired being younger that the other two. It looks like a fun day for all. We use to take a boat out to Drum Beater Island on Lake Pokegama but there were not very many places for people to enjoy. Mostly poison ivy. I like the trip and you make me homesick for Minnesota.

What a wonderful outing. Such a beautiful place and fantastic photos. I love seeing dogs have fun along with their people.

How fascinating. And I will remember the uniqueness of the lake just in case it ever crops up as a pub quiz question. Better still, I might ask it the next time I am doing the questions.

Great trivia info. ;) What a great day. Reminds me of days I had lakeside when I was a kid. Love the pictures. Great memories!! :)

A lake so shallow you could walk from side to side in places....how cool is that!

I would have been nervous also...I don't care if they can stand up they can also fall down.

That is a very cool happening for sure, a lake in a lake, doesn't get more weird than that eh? Too much fun had by all I am sure. Sorry 'bout the wind though, buggers.