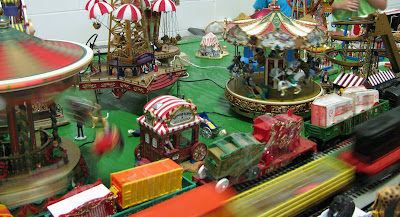 Yesterday we were on one of those missions.  Going to a train show.. Going to buy some cool cars for the train..choo choo! Far Guy was so excited he could hardly sleep. He has been looking forward to this sale ever since the last train sale way last spring.   All the way over there, he said "I hope that this is not a waste of time."  All the way over there I am looking for Antique Shops and Garage sale signs, because after the train show I get to shop!!  I was disappointed because there were not many shops along the back roads that we took.  We are going to have to take a different route home if I am going to get any shopping in today.  We didn't get lost or anything, and traffic was reasonable. Our mission was clear  "The Helicopter Car" should be located and purchased.   We walked into the building and paid our 3 dollars each for a ticket and ten minutes later we walked back out...empty handed.  Far Guy was so disgusted, and dissapointed..we drove almost two hours for that?  He said "Well lets hit some Antique Shops."   So one by one we hit some new to us Antique Shops and some great little garage sales along Hwy 371.  One place was one of those hoarders..as there were only pathways..and one room led to the next..Far Guy kept walking..when the floor got real spongy under my feet I began to get claustrophobic..and retreated to the front door..I have never been in such a place in my entire life.  No Trains..no old photos..but they did have a tame striped gopher that ate bird seed under the counter.  Then I hit a nice jackpot with old photos..and low and behold the next Antique Shop had two boxes of train "stuff"  ..Far Guy bought them both. I asked him how many cars were in the boxes.."Oh a couple, I didn't dig all the way through them."   It was a fun day, Chance had a good time watching for cows and barking at other dogs, we walked him several times throughout the day.

All the way home Far Guy speculated " What could possibly be in the boxes? "  All the way home I am hoping that he won't be disappointed.  I asked him "What if the old Desoto Car that you really want is at the bottom of that box..or the Helicopter Car?"  He said he would be so excited that he would wet himself.  I am going to have my camera ready! 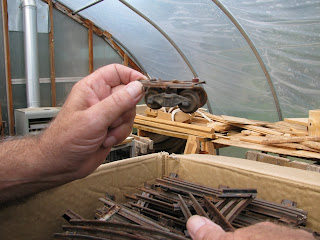 He unpacked the boxes in his old greenhouse/workshop,  the first one had lots of track, one building and two cars.  Not too bad. 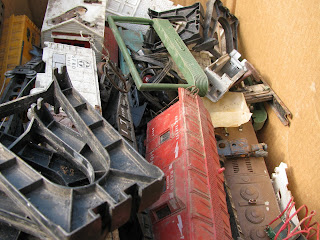 The second box had a huge transformer..a bunch of odds and ends and fourteen cars..count them fourteen freaking cars.  Choo..choo.. I hear that train a coming..but we don't have room for all these cars after they are all cleaned up and presentable.. a few more cars on the old Lionel upstairs and it will catch itself coming and going. 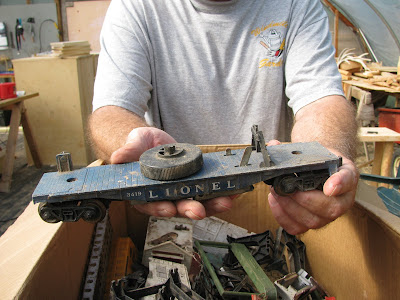 Luckily he went potty as soon as we got home..because here is the car that holds the helicopter..no helicopter was found..maybe some other day.  He had this same car as a kid..fifty years ago.  I told him that this one looked broken, he said "It looks just as broken as mine used to and it still worked." 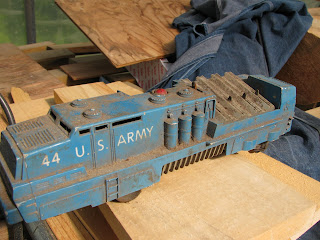 A US Army Car.  It held missiles.  He will probably carve some out of wood. 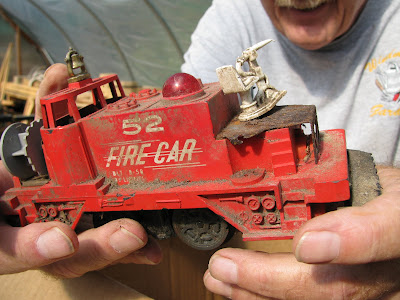 A Fire Car.  We will need to find a little guy to sit up in the chair to man the hose. 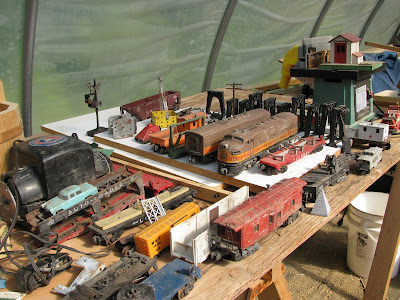 I have no idea what he is going to do..I do know that he has a few cars in this bunch that are really cool, and it will keep him busy half the winter fixing and repairing and cleaning them up.  Perhaps he needs a train cabinet, where the cars sit on pieces of track, and every day he takes out different train cars to play with:)
Posted by Far Side of Fifty at 7:07 AM

My brother-in-law likes to rummage around antique shops like the one you described. He says they have the best stuff at the best prices. I'm like you, I get claustrophobic and itchy walking down the aisles.

Wow, what a day. Far Guy what would be the odds that you would find such a cache of good stuff. I had never heard of those particular pieces before, but I will keep my eyes open now. A box of treasure and fun. I keep going back and enlarging the photos. Keep us posted on the developments.

What a great day! Let's go to the flea market>..

Congratulations to Far Guy on finding his treasure. Hope he has lots of fun restoring them. Nothing like a day at an antique store or a flea market - one of my favorite things to do too. It was definitely worth your long drive.

I don't know about everyone else, but there were moments when the suspense was killing me. Cool, and I am so glad that he found some treasures in the box.

Wow! Far Guy really hit the jack pot. He might want to check on Craigs List to find the helicopter. Next time it is your turn.

I am thrilled for his finds and the hours of fun it will give him in restoration and play time. I am also very happy that he was rewarded after his initial disappointment with the original destination. It sounds like you and your two best friends had a great day yesterday.

Now that is what we around here call a God thing! He has you drive nearly two hours and pay six bucks for what seems like a bust, then you chipper up decide you're going to have a good day of it any way, even after another seeming disappoint, He takes you on your way to where he wants you to end up after all! Two boxes of train stuff that includes what FG was after and then some! That is so wonderful it is hard to believe! Good and smart of FG to go potty before diggin' in the box!

I love the idea of a train cabinet!

This was such a great story where Far Guy got his boxes of goodies in the end--and you found a bit, too. We had a cousin of my mom's who collected trains and had a train room where you had to duck down to enter and pop up in the center of the room by the controls. As kids we thought it was awesome--even if we were forboden to touch a single tree or train car--hehe! Congrats to FG! ;)

What treasures Far Guy found, I expect he will do great and creative things with 'em. I can't wait to see.

You have a glorious day my friend!!!

Wow! What a find! That is so cool. I love those old shops. The Duke loves them too - and garage sales - so it makes for a fun day together.

Fun trip...except for the spongy floor...spooky! I think Far Guy hit the jackpot!

Yay! Trains! My son loved trains as a kid and still gets out some of the Lionels to put around the tree at Christmas time. We have an attic full of Lionels, complete with the original boxes, that he "inherited" from his grandfather. (The trains his own dad was not allowed to play with as a kid... go figure!)