Far Guy and I have a standing date from year to year. We go to the local County Fair late in the day. The first stop is the Pork Producers food stand for a pork burger..I usually stop off at another stand to get deep fried cheese curds..last night I chose homemade french fries instead with about three squirts of catsup in one end of the cardboard container. We meet up at the picnic table under the grandstand inside the Pork Producers stand. Neither of us has to cook..we are in a cooking slump. Not in an eating slump..just a cooking slump. Especially Far Guy..and this is not a good thing..it means I have to help him out with more than just a list of things he can cook which I post on the fridge. It means I actually have to go into the kitchen and cook something..now this is serious. The other night Jen called, I said "You have interrupted my cooking." She said " Who are you, and what have you done with my Mother?"

We do like the fair for more than just the food, we walk the Midway..stopping to greet neighbors and friends. I am easily distracted by the Nudgers and 5 dollars will keep me occupied while Far Guy walks around..it is not a huge midway.

For dessert Far Guy is in search of a perfect sno cone..grape..that is the only flavor that a sno cone should be in his opinion. I ask if we can just sit for a moment, I love to watch the little kids with their cotton candy and brightly colored sno cones. I "think" I see one kid with a grape sno cone..we argue "Did too." " Did not." "Did too." 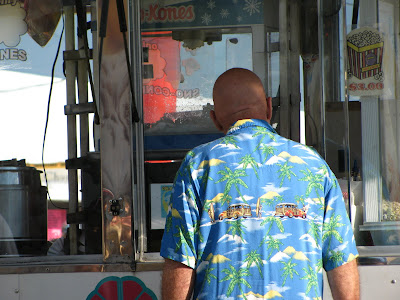 Finally he walks over and checks it out. He gets in line..they must have his beloved grape. 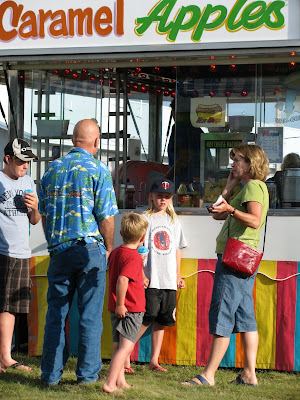 I am joined on the park bench by one of my cousins girls..she is getting re-married soon..and will be the mother of six instead of four..she is a far better mother than me.. Far Guy is conversing with one of his second cousins while standing in line. It is normal for me to meet and talk with many of my cousins on a regular basis..far less common for Far Guy (smaller family). 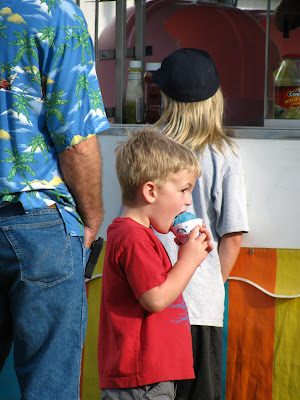 Sno cones and little kids what a great match. 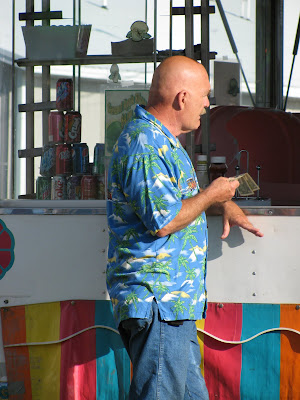 He is now going to part with two dollars for a sno cone..later he tells me that his first grape sno cone was ten cents and a guy whose name he cannot remember made great ones...that was before the Barrys super duper home made grape syrup..and that one used to be 25 cents unless it was Joyce that waited on him..then it was free (Joyce liked Far Guy.) 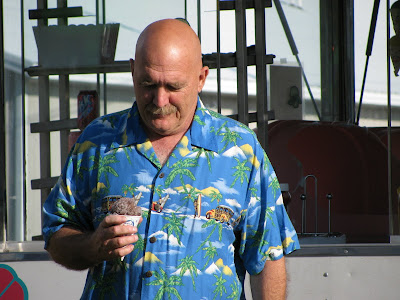 Success..just like a little kid again.
We round out the evening by going through all the exhibits in the commercial building and into the barns, where I can see the newly shorn sheep and gaze longingly at the goats. We giggle at the long eared fat rabbits..and carefully visit with a couple of Lamas before we head to Far Guys very favorite the Chicken barn..the roosters are crowing..one is very hoarse..he has probably been in this crowing contest since yesterday..not much changes at the fair..the burgers are always delicious..the evening always ends at the DNR building looking at all the dead animal mounts.. the big excitement there was the new addition of a huge tub with some water in it and some painted turtles and one snapping turtle and a big sign that said "Do Not Touch, they will bite."


It was a lovely warm evening in Minnesota last night, and a great night for a date night! Tonight we are headed to the neighbors for a party..and tomorrow for a Family Reunion for Far Guy..no cooking for the next few days either and by Sunday who knows. The homemade from scratch soak all night the night before baked beans that we will take to both potlucks are in the fridge..someone that was impersonating me in the kitchen is a fairly good cook..but not often:)
Posted by Far Side of Fifty at 10:04 AM

Wow, fun times!! Looks and sounds like a great date night! Sounds very similar to hubby and mines date night every year at the county fair, just fabulous, and something to always look forward too!!!

You made me laugh. I love fairs, but we rarely go as Terry loves stock car races instead. :)

We rarely, RARELY eat out so when I get to go and not cook...YEAH!

What a lovely way to spend a summer evening. I have to agree with Far Guy. Sno-Cones should only come in grape! I'm thinkin' I gave a nickel for the first one I remember wolfin' down.

Ya'll have a wonderful weekend!

This not cooking thing may be age-related. It is generally almost as economical to eat out when there are only two who need to eat. Your opening line reminded me of my sister-in-law describing the Peanut Festival, "First we stop at this food booth and order . . . and the next stop is to buy this dessert." Aaahhh, traditions - - - it's what makes life comfortable and fun!

I love that you guys go to the Fair each year...it's fits my mental picture of you perfectly!!!! :) Wonderful post...made me hungry!! :0

Give Chance a hug from Sophie.

Cooking is a hard one for us in the summer time, fair food sounds good to me.
Patsy

I can smell the hot dogs, and I am getting a delicious wift of cotton candy. Oh and the popcorn.

I am hearing the rides, and the kids screaming in delight. This was a super post, I loved how you used your photos to make us part of the experience.

Sounds like fun, grape is my favorite flavor! I sure know what you mean with the cooking slump!

Love all the photos. Far Guy looks all set for a luau in his nice Hawaiian shirt. Now that sounds like a good idea. I think he should take you to Hawaii for vacation. Cute photo of the boy picking his seat too - Real life in action. I have to disagree with Far Guy though. The only good sno cone is a cherry one.

Amusing post... I know exactly how you feel about cooking. I hate it too. Although that imposter who can make real baked beans from scratch sounds awesome!

Love this post!! Once a year my husband and I use to go to the state fair. We loved it!! Haven't gone lately.....so crowded. This makes me want to go again.

When my girls call and I am cooking they ask the same thing. I have to remind them that I USE to cook when they were little!!

Sounds like a good plan...I need to go on a date too. I hate to tell the Far Guy but ORANGE is the only snowcone worth spending two bucks on.

We have two small town cafes and we just have to go to each one at least once a week as not to offend either one of them. They know which night of the week we are coming. Monday's and Thursday's we are more tired. The fair is a neat tradition for you two. It is a joy to see some of those things are still around.

Ah, see I knew you were a good cook really, perhaps reluctant but good. I had heard tell that if a person is found to not be a good cook in middle America that they get kicked out and have to go live in... California.