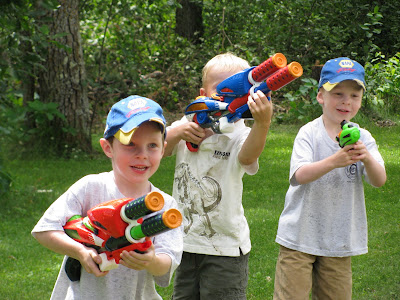 The neighborhood is undergoing some changes.  The boys are getting bigger, and turning older, three of them will go to school this fall.  Recently the twins were given guns for their sixth birthday.  They loaded them up and began to shoot almost everything in sight.  I cannot believe that they are six already, it seems only yesterday that they were born and so very tiny. 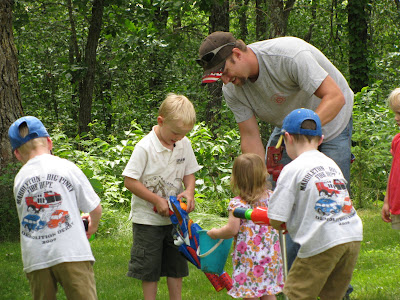 The re-loader kept hollering "No fair shooting anyone over six."
No one was safe..I survived, they were pretty poor shots, it was almost impossible for them to aim while running and giggling. 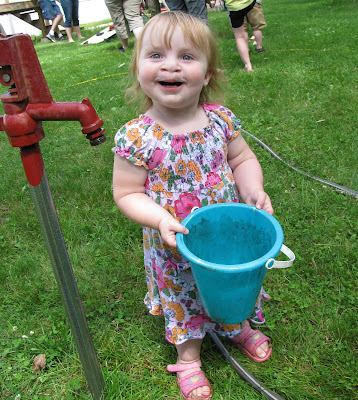 Aubrey was armed with a bucket, I was rewarded with a huge smile when I turned on the hydrant to give her some ammo..which she promptly dumped on my foot. 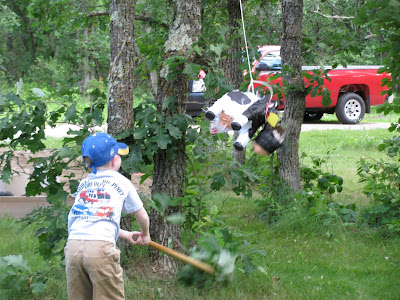 They also beheaded a cow, they whopped her with a stick until she lost her head and spilled out candy into the yard. 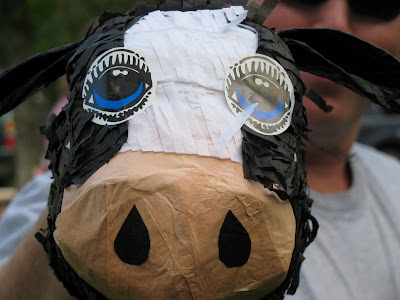 Yup it is a pretty exciting neighborhood, I am thankful to just be the old Great Aunt watching from afar:)
Posted by Far Side of Fifty at 11:57 AM

Get out the raincoat and the umbrella, you are under attack. Teh he.

The pure joy on their faces says it all, it makes me smile just to see them.

That is so much fun watching those little ones. So precious. Have a happy 4th.

That little girl is adorable beyond words. The picture makes me want her to give me a hug. She is precious.
Your report of the party was fun. . . . good thing you had pictures or someone would think it was animal cruelty - - - - - until the candy part!

What fun.....cousins, cousins and more cousins ---

Looks like you all had a great time. "Be-heading a cow for candy" - not come across that before.

What a great time for those kids. THey'll remember the water gun each summer and trust me, they get bigger - as kids do. They're so fun! We've missed them riding their bikes in evenings past our place - heard they're taking swimming lessons this week!

I do so enjoy my Super Soaker which has smacked the backside of several squirrels now. It's sure fun to play with those things, glad to see that kids have discovered them, too! Really fun shots, Connie, I love the little girl with the blue bucket!

"Aubrey was armed with a bucket"
okay.. that and the mischievous
face was all it took to give me the giggles

What a fun young group of kids. Our neighborhood continues to evolve from all boys to all girls now. Different sets have all graduated and next door the twins and older sister scream and yell while playing in their pool. The are the last of young children around here. Water is so much fun for a kid.