The area West of us that was clear cut had huge piles of brush so that very windy day they decided to burn it. 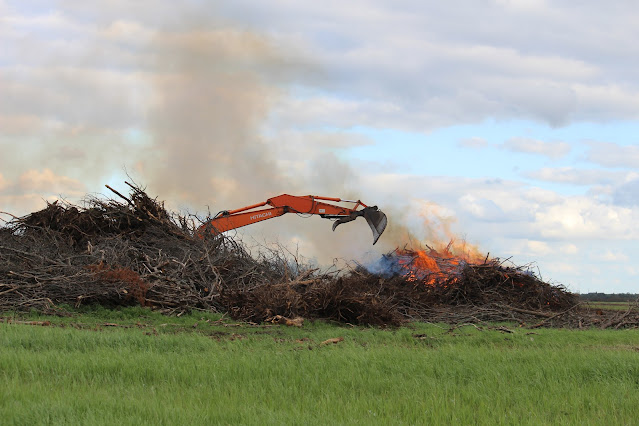 We could smell the smoke outside for a couple of days.  Then it rained...

Our oldest Grandson Noah has pneumonia in one lung, they gave him IV antibiotics in the Emergency Room and we hear he was feeling much better on Monday.

Our second oldest Granddaughter Maddie got a job in Grand Forks North Dakota, she and her husband and the little ones are moving late this week from Michigan.   It will be good to have them closer!

Jen and Andy and another couple that they have known for a long time formed a partnership and bought a building ( previously a Town Hall converted into a residence) in a small lake town.  It is really a cute place, I helped do some cleaning and painting there.  Right now it sleeps 13 plus people and has three bathrooms.  It has room for expansion in the loft and in the basement.  The part they are using now is 5,000 plus square feet. They will use it for a craft retreat and a gathering place.   Jen's annual Craft Retreat will be held there this Fall.   It is an hour drive from our home.  Far Guy went along one day and he and oldest Grand Savannah put together some craft carts.  Fun to see Jen and Andy tackle a project.

Don't you mean crazy? I think your daughter needs to learn to say no.

Hope Noah feels better real soon. Congrats to Maddie on her new job and Jen and Andy on their recent purchase of a building. Hope you and Far Guy are doing well after all the smoke.

North Dakota! Working in the Oil fields? That is a good job if you can get it. It would be nice being closer than Michigan. ( That darn lake gets in the way when you want to visit the other side of the Mid west...) Sounds like the converted town hall will have plenty of room for the visiting fam.

I pray Noah is on the mend. Pneumonia is nothing to mess with! Jen and Andy are go-getters that's for sure! Sounds like a fun venture along with some hard work!

What a great space for Jen & company to create, so others can gather and create! Last I knew there was a shortage of places (especially get-a-way) that can accommodate groups around us. Including rustic wedding venues. Likely similar in other States.

Good to hear the grandson is on the mend. Pneumonia is scary! How exciting to have the others moving closer to you. That retreat center sound like a lot of work, but a fun project. I'm sure the town appreciates someone fixing up a building for a great use instead of allowing it to sit empty.

I'm glad to hear that Noah is on the mend. Yay for new jobs bringing you closer to home too. That's a big project for Jen and Andy. How fun to be able to help with it. I would love to have other ladies to craft with. I miss my knitting group but haven't found one here that meets during the day.
Blessings,
Betsy

The retreat center will be a great investment. People are always looking for a place to gather.I think it will be successful. Happy to hear Noah is on the mend and that Maddie and family are moving back to ND.

Wishing Noah a speedy recovery, and congratulations to Maddie on her new job.

I'm guessing Jen's is the first comment. It made me laugh! Good luck to them on their new venture.

Must have been scary to have Noah that sick! Glad he's starting to get better. Also glad your granddaughter is moving closer to you, though I don't know...Michigan vs SD....hmmmmmm LOL...that's just me loving my state!

That building that was once a Town Hall sounds like it would have lots of potential. I hope it all works out well.

That's a huge propery, they will be busy for awhile!

A retreat center is quite an undertaking. I will be interested to see how the venture progresses.

We had a neighbour do this. I called the fire department! It's illegal to leave it overnight.

wow....so much going on in your family....just amazing. I'm certainly glad to hear that Noah is getting better. So Maddie and family are on the move....hope you can see them when they're closer to you guys. ....Congratulations to Jen and Andy on taking on this huge project...hope it goes very well in every way.

Lots going on! That retreat space sounds amazing! Are they planning to rent it out as a vacation home or for family reunions and stuff? We have some families just outside of our town that have done that on their property, Party space, wedding space and just large gatherings. It's been very popular. Prayers Noah continues to do well, scary! And the great grandkids closer, fantastic!

Catching up...ick on the fire. :( for Noah, but glad he is getting better!
Jen and Andy are really on a roll. Sounds like new adventures all around.

Hope Noah continues to get better.

Great that Maddie and family are moving closer.

You have a busy family and it’s always fun to read about what they are up to! I hope Noah is all better now.