Last of the Lilacs

My Late Lilac had some very nice blooms this year.  Sadly the heat did them in a few days ago. 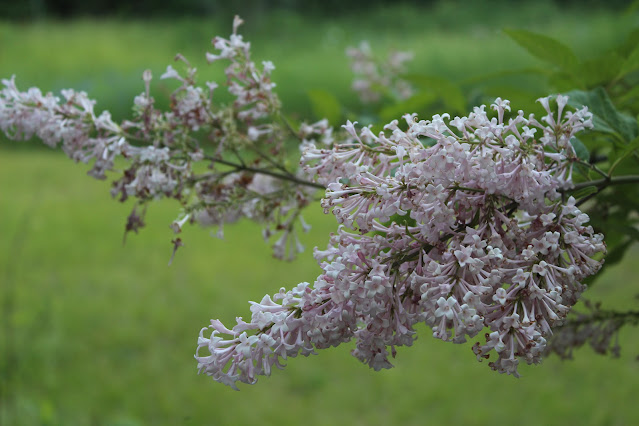 I had a good day. I sprayed some Thistle and some Poison Ivy.  Saw just one deer standing on a dirt pile reaching for branches.  The Poison Ivy is growing really fast and tall this year...I need it out of the edge of the woods where I mow.

Have you heard the old joke?  One guy said to the other "Where are you going?"  Second guy replies "Far go"  First guy says "Moor head."

I know what you mean about traffic. Back in the mid 70's I lived in the LA area. Never again will I live in a City. It is small town/rural life for me.

After years of my lilacs not growing, I am starting to see sprouts coming up every where around them. So they were growing but just not above ground.

LOL! Thanks for the chuckle with the joke.

Reminds me of one I heard a while back.

Three guys are out walking. First guy says, "Windy, isn't it?" Second guy says, "No, it's Thursday." Third guy says, "Me too. Shall we go somewhere and grab a drink?"

Lilacs...my favorite! I have trimming and weeding to do and I have poison everything here! I don't get the joke but maybe you have to live up there?

I lived in some rather busy places in my life and prefer the quiet scene of the countryside. One day I may have to rethink that though as the rural areas don't have any good public transport.

I love Lilacs and wish I had a dozen or so bushes. Sigh.

Too bad you couldn't stake out my Sven, he would devour your poison ivy.

A beautiful lilac bush. We transplanted a slip from my sisters bush this spring and sure hope it grows. It's so hot here we just keep watering it like crazy.
I detest the traffic and would love to live in a rural area or small town, but alas, I think we're "stuck" here. It's a nice house and I'm grateful for it but would love somewhere quieter.
Blessings,
Betsy

I agree about the traffic, for sure. Every time I we go back to the area we used to live, I immediately tense up. I told Dave, even if we won the money to move back, I wouldn't.

LOL - you have to be from ND, SD, or MN to get the joke!! Another one for you: If Granite Falls, Cottonwood too!

My husband has been spraying Thistle on the hillside behind us for a couple of weeks now. Tough stuff!! But we haven't seen an Poison Ivy yet thankfully.

I noticed there are a couple of lilacs just blooming here in my neighbourhood. The scent is so noticeable.

Even though I live in the city, I try to do most of my driving mid-morning. Most everyone has gone to work by then and the traffic is much lighter.

Ah, local humor! Come to think of it, I’m not sure we have any here. I love lilacs. Their season is too short!

I haven’t been to Fargo in years.the last time I was there, I was surprised how it had grown. It angered me to see the rich farm ground covered in concrete and asphalt.

Although I live in a rural area we are only 25 minutes from downtown Minneapolis and the western suburbs are 10 minutes away, so we drive in traffic all the time. People have become quite aggressive. Lilacs have been gone for a month, iris and peonies are done, too.

The lilacs are so quick to go!
(ツ) from Cottage Country , ON, Canada!

Hi Connie I'm back to trying to blog again after a month long vacation with my North Dakota professor girlfriend and her sister who owns a mansion in the whole I, it turned out to be a disaster since I found out that very very rich people are quite different from us regular folks, meaning that to bossy women telling me what to do or not to do every minute didn't work out. Spring Valley where I have very deep roots having taught many of the population here is now where I intend to stay, I did miss a couple near hurricane while I was gone. I think my chances of finding a compatible companion now is perhaps possible anyway I'm optimistic, I assume you and far guy had a very late spring like I did, from late fall on I had a frozen septic tank and had a choice between renting the motel here in town and going to Hawaii for a month, it seems when if you flush a toilet bird do a laundry and your basement floods leaving town for the winter was an easy choice, Ray (Troutbirder)

Heavy traffic is something we deal with here in the Seattle suburbs. Fortunately we don't have to drive far for most of our services, and we have a light rail station just a mile away to get into many parts of the city.
I confess I didn't get the joke, but then I am still waiting for my brain diagnosis.

I really don't understand how people can deal with traffic on a daily basis.

The lilacs are finished here to. They were nice while they lasted.

I've heard some nasty stories about poison ivy - sure glad it doesn't grow here!
As our city grows the traffic grows as well, and I enjoy getting out into the countryside and away from it whenever I can.

A parts run is bad news as something is broken down. Our town is now 70,000. I get into the lane that I need immediately or I will have to go by my destination and go back. We don't live in the heaviest area so we just stay away during rush hours morning and night.