Mom and I found a photo...a very old Cabinet Card from the 1890's.   I know it is from the 90's because the edges of the card are scalloped. 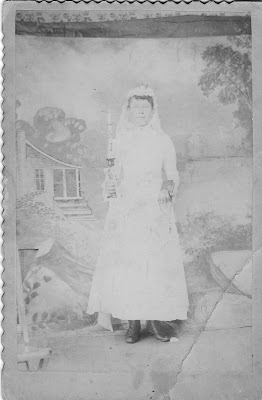 Someone was Confirmed....the book and the candle are clues.    If you think the head is too big for the body...you would be thinking the same thing as me.  It is an early photo shop attempt...the photographer probably took another photo of this person sitting down...and swapped heads.  ( Sounds barbaric...but if the person closed their eyes ...he could either fix them or do his version of photoshop)

Most young people got confirmed about age 14 or so...

There are a few relatives in contention...My Great Grandmother Hattie  was born in 1878 In Palmer Germany.  She came to the United States in 1884 when she was 6 years old.  She would have been 14 in 1892.

I am not sure which one it is.   It was found with the Amanda side of the family photos.  Is that a clue?  Might be...might not be.

Another case of an unmarked photo.   I scanned it and gave it back to my Mother.

What a shame nobody took the time to write on the back of the photo. It is quite frustrating, as I know well because I too have photos of nameless people :)

That is neat! I saw one of my hubby's family taken wayyyyy back when too in the 1890's. Solemn looking people at a log cabin with a lot of children all looking tired was my impression.

Now that is a real find! How interesting. My guess is Amanda.

I think too many of us have unmarked photos. And the current generation won't have any paper photos at all to guess at. In a way, that makes me a little sad.

We have lots of unlabeled somber family photos, too. Very few are that old, but I think we have some from the 1800s of relatives we don't know in Sweden. My sister got into ancestorial tracking years ago but not much known once she hit Sweden--and that is grandparents and great grandparents so she didn't get very far--LOL! Good luck! :)

I have a couple of boxfuls of photos from both Dennis's family and mine. Lots of the photos are mysteries to us. I guess the people taking them think everyone will know who it is. That's why I always try to write on the backs.
Blessings,
Betsy

How interesting! I didn't know about the time frame for the scalloped edges. And I also didn't know that photographers could swap sections of pictures back in those days.

I suppose that once the pasted the new head on the photo they could take a photo of it. It does look strange. Good luck in finding the identity.

After Mom dies, Dad had us over to go through all of the photos mom took. She took pics of the neighbor kids back when we were in Grade school! Dad had no clue, thinking they were family or something. Thank goodness for blogging! I can now write a story for all of my photos so I will not forget them. And for anyone else who might care.

Interesting find. I did not know about the scalloped edges.

Thanks for the reminder to label our photos! I have spent hours labeling old photos. I still have a lot of very old ones to label. It's a job but worth it! I love the old cabinet card, that's fantastic!

Interesting photo. If only people labeled them more often so we weren’t left wondering! Do the head and body belong to the same person, do you think?

Fascinating and you have learned so much about old photos. I like the background they used too.

Somebody who knew what these photos were had kept them. they did not do a good job of passing them on.

We have a photo of Bruce's great grandma, maybe great great grandma where her head is definitely way too big...now I understand.

Cynthia, Yes I think the head and the body are the same person just taken from different distances.

Too bad no one jotted a name on the back of that photo. I have some of those unidentified pictures too.

So fun to see these old photos. A family history mystery!

I know this is is a very long shot...but I saw a 1940s girl scout troop photo on Etsy. Don't know if it could be anything you might be interested in but thought I would bring it to your attention.
The studio stamp on the back is for Woodhead Studio. The troop was 42 I believe.
Link to photo here....The shop is MadreGanza on Etsy. Hope these are enough to find it.