We spent some time UP North with Little Elvis and Sadie...and Phoebe Adam's cat too.

Little Elvis was more than happy to spend the night locked away in our room.  However Sadie came to wake him early in the morning and he in turn woke me up! 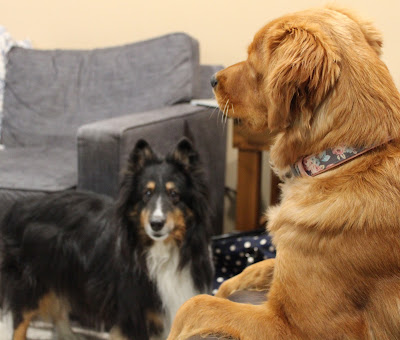 They are pals to a certain extent.  Little Elvis wants to be in charge and when Sadie lets him he is happiest.  She is a tad jealous of him and if you are petting him she will push him out of the way so you can pet her.  Little Elvis being an elderly dogs likes naps.  When he is napping and Sadie wants him to wake up she touches his paw and he is instantly awake!

It was fun watching Sadie catching rain drops in her mouth one day.  If we could all be that happy in the never ending rain! 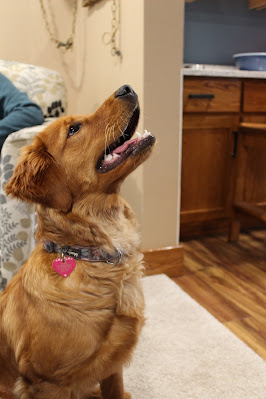 Sadie is turning more of a red color.  Her light colored shoulders are pretty much gone.  She is filling out nicely.  Her tail got longer and she is getting some longer hair ...a bit of feathering on her tail and legs.   She can swim as Andy found out one day on a walk...she dove head first into the water and swam around.

Sadie likes attention and enjoyed having us around.   She was a little bossy...she wanted to be let out the patio door when she is capable of using the doggy door.  She carried off Far Guys shoes on a regular basis...shoes seem to be her favorite thing to collect...she grabs them and then runs away with them growling the entire time.  Silly dog.   I won't give her any treats unless she is on her bed in the kitchen, she knows this, she also knows that Far Guy will give her treats where ever she is at.   She knows us TOO well.

Sounds like Sadie and Little Elvis were really happy to see you. Glad you enjoyed their company.

Sounds like a good doggone time.
Sadie has so much puppy pleasure going on. Dogs seem to find joy almost everywhere even on rainy days.

So nice to visit Sadie again, and see how she is growing up. Smart critter, that's for sure! :-)

So nice you were able to visit your newest grandchild! She is getting big...she's lost that puppy look. Still cute though!

Wonderful to see Sadie again on the blog. It sounds like she is developing more of her personality.

It's nice having cute pets to entertain us!

Animals are so much fun. Far more than lots of humans I've met in my lifetime. Present company excluded, of course!! :) ~Andrea xoxo

Ta da! I'm once again able to comment. Dogs are a true gift to humans. It's good to be back.

It's fun to get an update on your furry relatives. I'm sure they were all happy to see you too.

I liked having dogs. These days it is cats.
They are wonderful pets, dogs.

I know you are missing them a lot! :)

My goodness she's almost grown up - if stature at least. Such a cutie!

Sadie is a fine looking dog who makes people happy

Sadie is looking like a grown up dog. I think it's very apparent that the two of you have been missed by the two of them. :-) She's a smart puppy to know that her treats come easier from Far Guy.
I think what we miss most from home is Zoey. She's doing well at Mandy's but golly, we miss her. Having a wonderful time here though with our grandbaby. We're doing lots of cuddling.
Blessings,
Betsy

Any time there are dogs I'm happy! Sounds like Sadie is figuring out how to get what she wants. I hope Little Elvis can hold his own!

Glad you got to stop by and visit your family and the crazy pets there. Fun for you to see the changes in Sadie too.

Sadie has really grown from the last picture you shared a few weeks ago. They are a fun pair.

My goodness Sadie is growing big fast! I'm glad you were able to spend some time with both dogs. I know they love you as much as you love them. I bet it can be a challenge for Little Elvis to keep up with Sadie's youthful play. They are both such special and smart dogs!

Spending the winter with puppy Sadie was probably the best thing for both of you.

Glad you got to spend some time with the furry family members. Sadie sounds like a really smart and funny dog.