A Lucille between two Evelyns.   That was Far Guys old neighhborhood.   His parents Marvin and Evelyn, next door was Emil and Lucille and then Ray and Evelyn.

Emil and Lucille’s lawn was off limits…the boys… Far Guy and his friends used the alley…cause no one wanted Emil to call their mothers.  Emil was a crank, he didn’t like kids and he made no bones about it.

Far Guy says “poor old Emil …he hated boys and he was always watching Mark and I, it seems like everything we did wrong Emil was there to notice.  One time I was locked out of the house …I knew how to get into the house by going through the basement window, so naturally I was on my way through the window when Emil showed up shook his finger at me and said “I’ve got your number.”  Emil had a row of cabins in his yard next to our property line…so he was the eagle eyed neighbor. He must have been watching everything in the entire neighborhood.   One of my sister Jan’s friends was accused of stealing vegetables from Emil’s garden.” 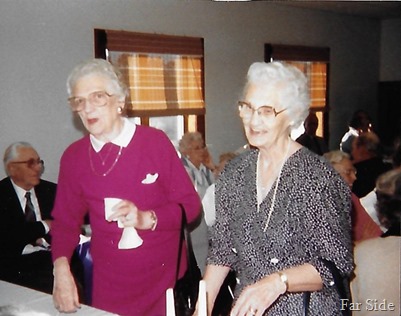 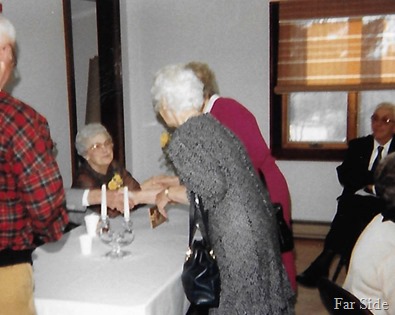 The ladies at Marvin and Evelyn’s 50th Wedding Anniversary in 1990.

Emil died in 1977 the neighborhood relaxed after that.

Would you believe I grew up with a neighbor just like Emil. Small world.

I wonder what it is that makes people so cranky, like Emil. I have a whole neighborhood of them here!

It seems every neighborhood has an Emil in it. How sad.
Blessings,
Betsy

Seems sad to think that after you died people relaxed. Some people are just born miserable, I swear. Some get more miserable as they age. Seems like there are always some of them around, though. ;)

There's always somebody around to stop life's enjoyment.

Many people had someone like Emil living near the

We had a cranky neighbor named Bill when I was a child living in an apartment building. When we moved to our house our neighbors were an elderly couple who didn't have any children and were wonderful neighbors who loved us and we loved them.

My husband jokes about becoming a grumpy old man and shouting "get off my lawn!" to random, terrified, neighbor kids...but I guess for some people, that is their reality. Sad. Hopefully, there were some people who knew a different side of Emil.

We have a strange neighbour next door who has called city by-laws officers on us for various 'transgressions' ranging from the way our guests park to the height of the grandkids playhouse. Really dumb things. We try to leave him alone as much as possible.

Have you read A Man Called Ove?

Yes there are always some people that seem to have all the rules and will be informing of us about them adamantly.