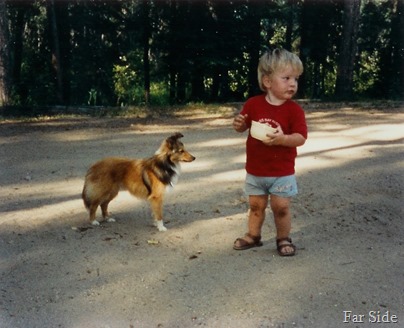 Logan obviously has something in his dish that has Captains full attention. The photo was taken at my parents resort sometime in the summer.

Captain would have been 4 years old.  He was the runt of one of my Sheltie litters and lived with my parents on and off for a few years.  When they were gone on vacations he stayed with us…one time he just stayed forever…and that was fine with us. He lived until 2001 and was our last dog before we got Chance.   He was a undersized Sheltie…just a little bit of a pup when he was born he weighed about 4 ounces…with round the clock care for about ten days nursing everytime he woke up he grew.  His name back then was Captain Stubby Grunter…he was short and grunted when he nursed.  He was the last born in a litter of four remarkable pups.

Oh yes …Logan he is all growed up too…married and lives in Seattle.  He has a PhD in Robotics and Mechanical Engineering, he is working as a Research Scientist. Logan is my nephew…the youngest son of my baby brother.

He is adorable! Well, both of them are. It is fun to look back like this. I have a photo of my grand daughter sleeping on the couch as an infant and Morris laying on the other side of the couch watching over her. Such sweet memories!

What a cute picture! Kids and dogs together always make the greatest pictures....oh, and grandparents too! LOL!

What a precious picture!

Fond memories - and such a sweet photo

What a great picture and it’s fun to hear what both Captain and Logan grew up to be. A 4 ounce puppy! That is amazing. He was a beautiful dog. Blessings, Betsy

I enjoy your Wistful Wednesday posts.

What a sweet photo and wonderful memory.

Great connections on this one.

Love the picture! Sometimes the 80s and 90s feel like yesterday to me.

What a precious picture.... to go with an even more precious story!! Love, Andrea xoxo

Both of them are cute! If this was in black and white, the picture would remind me of the little rascals.

I love those little chubby legs. That's a great story about Captain. The only problem with our furry friends is that they don't live long enough. Sure was a cutie. They both were. :-)

Amazing how time flies and brings lots of changes along the way, isn't it? And the nineties in some respects seem like yesterday. Wow, Captain must have been a really tiny puppy; he sure was a pretty dog.

What a darling little sheltie!
Great photo. How did all that time pass so quickly. :)

Apparently, a lot has changed since you snapped that adorable picture!

Sounds like both of those little guys did very well!

My Goodness! I can't imagine a puppy weighing only 4 ounces. Looks like the great care Logan got worked. I like how fixated he is on what's probably something edible in that dish.

Darling photo and love the story!

They both are sweet young pups. My son posted a photo of me whit him at the age of 3. He had a cast on his leg and I had long blond hair. I am tempted to share it but is sort of depresses me as to how much I have aged. I guess I could post it and not identify anyone in the photo.