There is a park in town called Deane Park. 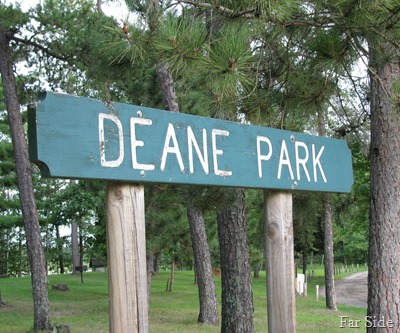 There is also a plaque at the park. 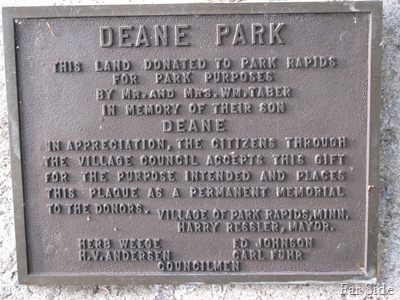 The placque resides on a large boulder.

Now for the rest of the story.

Deane graduated from Park Rapids High School in 1914.  He attended college but then joined the service.  He was training to be a flying cadet when a influenza epidemic swept through the training camp in Berkley California.  The ladies of Berkley assisted with the care of the soldiers.  Deane died of influenza and pneumonia.  He was in his last 12 weeks of training to be an aviator and scheduled to go to France.  His body was returned for burial in Park Rapids. He was survived by his wife, his parents and step mother, a half brother and a half sister.

His father was a banker and very prominant citizen of Park Rapids.

The Flying Cadet program was the prototype for the development of our Air Force.

During World War I the cadet was under the age of 25 and had at least two years of college, was physically fit and morally sound.

Can you imagine in the early years many of the young men had never seen an airplane or been in one.

Hats off to all our Veterans.  Thank you for your service.

My father was born in April of 1918 and he told me how his mother feared the 'pandemic' of 1918 and how people were quarantined in their homes...whole neighborhoods.
It will be a quiet Veterans Day here.

I never knew this story. Thanks! Happy Veteran's Day to all the Veterans. Thank-you for your service!

God Bless all those who serve or have served in the military: we owe them more than we will ever realize.

He was so young. How sad. Yes, thank you to all our veterans.

My grandmother had twin siblings who were not quite a year old that died in the flu epidemic.

That was that was very interesting. Such a sacrifice for everyone and to add influenza into the mix would be terrifying for any parent. Thank you to all Veterans, including my dear husband.
Blessings,
Betsy

What a sad story.

That interesting to know the background! Thanks. :)

Thank you to all those who served in any war, or are still serving in those that remain. I wish all war would become a distant memory. Thanks for telling me about Deane. He shares my son's birthday.

Just think...only one more day and it would all have been over! What a tragic loss from such unexpected causes. Thanks for sharing his story.

This has been a week to remember those who fought for freedom. And those cut down by the "Spanish flu.

My stepfather lost both of his parents in the flu epidemic....he was only 3 years old. He went to live and be raised by his aunt and uncle. He never got a chance to know them or even have memories of them...maybe that made it easier? 22 is awfully young too. I always feel for the poor parents who invested all that love and attention and to lose it right when they were on the cusp of seeing what they were going to make of their lives. My heart always goes out to those who are left behind to deal with the loss.

I have watched a movie about a group of American pilots that were hired by the French to fly for them. Flying back then was pretty dangerous and uncertain. The story will last a long time with the plaque on the rock.